Lewis Hamilton has admitted he was not sure his 100th race win would ever come after securing a landmark century of victories at the Russian Grand Prix.

The Mercedes star overcame the rainy conditions in Sochi at the end of the race to overtake compatriot Lando Norris on Sunday afternoon and take a two-point championship lead over title rival Max Verstappen. 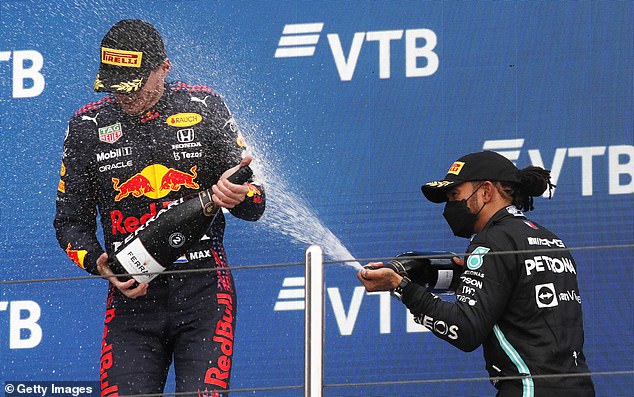 The Brit finished ahead of title rival Max Verstappen (left), who took second after starting last

He said: ‘I want to start with thanking the fans – we have such a great crowd here. I know it’s not been the best of weather but what a race it provided!

‘It’s taken a long time to get to 100 wins. I wasn’t even sure it would come. The team made such a good call at the end. I didn’t want to let Lando (Norris) go.

‘I’m incredibly grateful to all these men and women here and back in the factory. Wow, 100.

‘Going to bed last night, with the job that I did yesterday (Saturday), there were subtle little mistakes. I was so determined to do the best job I could. It was tough.

‘Max must have done a good job to get up to second. The rain came and it was opportunistic and and a great call by the team.’

Hamilton overtook compatriot Lando Norris (second right, No 4) towards the end of the race 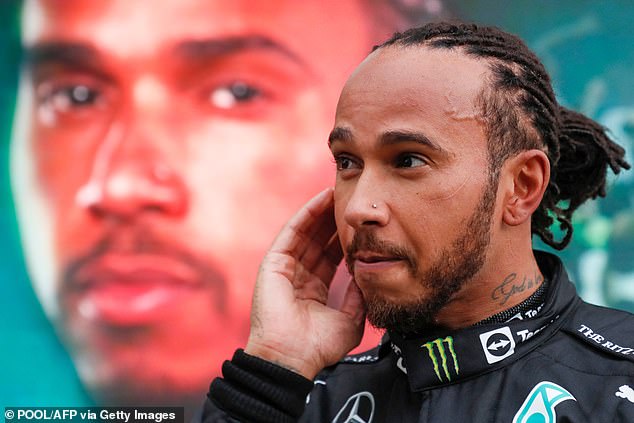 McLaren driver Norris, who had led the race for a long time, was on course for his first ever race win with only a few laps remaining when the rain started falling.

Neither Hamilton nor Norris were keen to come in, but while Hamilton was urged by his team to make a pit stop and switch to a more suitable set of tyres for the conditions, Norris had his way and stayed out.

Mercedes’ decision, in hindsight, proved to be the right one, and the 36-year-old took the lead when Norris slipped off the track. Norris eventually had to pit and finished seventh.