Lewis Hamilton has admitted that the fallout from his controversial title defeat by Max Verstappen last year was a ‘difficult time’ for him, with the superstar today speaking publicly for the first time after taking a step out of the public eye.

Mercedes driver Hamilton was denied a record-breaking eight world title in Abu Dhabi during the final race of the season, with Red Bull hot shot Verstappen able to overtake him in a two-way shootout following Michael Masi’s questionable decision.

He subsequently disappeared from social media, raising concerns and early speculation that he would choose to step away from the sport, but has returned ahead of the new campaign and vowed to ‘attack’ again in a bid for revenge.

‘It was a difficult time for me and a time where I needed to take a step back and focus on the present,’ Hamilton, who appeared alongside new team-mate George Russell and team boss Toto Wolff at the launch of Mercedes’ new car, said.

‘I had my family all around me and creating great memories.

‘I eventually got to a point where I decided I would be attacking again coming into another season and working with Toto and George.’ 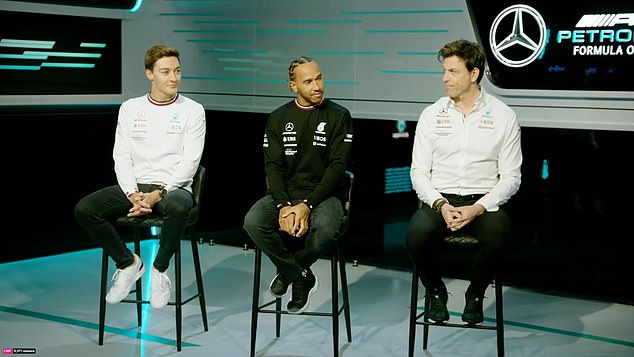 Hamilton has also insisted that he never declared he would stop racing, and outlined the ‘privilege’ of working with the manufacturing heavyweights.

‘I never ever said I was going to stop,’ he added.

‘I love doing what I do, and it is such a privilege working with this large group of people and you feel like you are part of a family. There is nothing quite like it.’