Liam Fox has attacked Boris Johnson’s Brexit ‘Plan B’ as he suggested the EU would never sign up to it in comments which prompted fury among allies of the Tory leadership favourite.

The International Trade Secretary dismissed the idea that the UK could waive tariffs on EU goods after a No Deal split – a position seemingly advocated by Mr Johnson as a fall back option in the event the two sides cannot strike an overall agreement.

Dr Fox, a prominent Brexiteer and supporter of Jeremy Hunt, demanded that the contenders in the race to succeed Theresa May stick to ‘facts rather than supposition’.

But allies of Mr Johnson responded angrily as they accused Dr Fox of ‘ludicrously tilting at windmills’ as Tory Eurosceptics turned their fire on each other as the battle for the keys to Number 10 heated up.

EU sources immediately dismissed Mr Johnson’s ‘Plan B’, describing it as ‘bullsh**’ and insisting that the two sides had ‘been here before’.

Mr Johnson has vowed that he will take the UK out of the EU by Halloween ‘come what may’, describing the situation as ‘do or die’.

However, with Brussels having repeatedly ruled out renegotiating the current deal – Mr Johnson’s ‘Plan A’ – attention has turned to his ‘Plan B’.

Mr Johnson yesterday suggested his back up plan would be seek a ‘standstill’ arrangement with the EU to enable trade to continue until such a point as the terms of a final future relationship have been hammered out.

He argued that a provision under the General Agreement on Tariffs and Trade – known as Gatt 24 – could be used to avoid tariffs under World Trade Organisation rules for up to 10 years.

But Dr Fox appeared to reject the plan as he said the EU would have to agree to it – something he claimed was extremely unlikely.

Liam Fox, pictured arriving for a Cabinet meeting in Downing Street yesterday, has criticised Boris Johnson’s Brexit ‘Plan B’ as Tory Eurosceptics turned their fire on each other 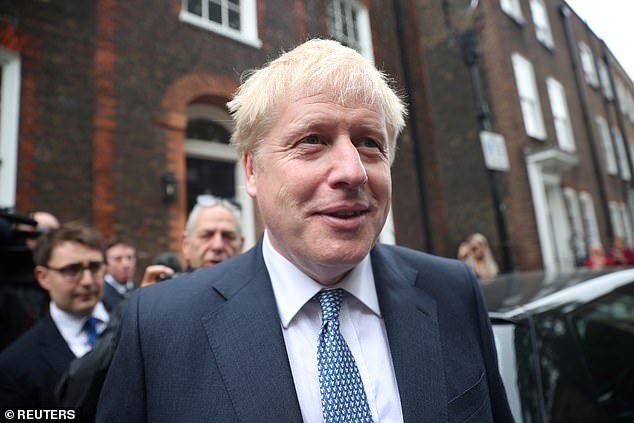 Boris Johnson, pictured today leaving a building in Westminster, said he would seek a ‘standstill’ arrangement in the event the EU and UK could not agree a Brexit deal

Writing in a letter to his constituents, Dr Fox said: It has been claimed that in place of the implementation period we could immediately establish an interim agreement under this provision.

“However, in this scenario, the UK would still require the consent of the EU to the terms of that agreement, with an agreed plan and schedule for implementation.

“A ‘no deal’ scenario, by definition, suggests that there would be no mutual agreement between the UK and the EU on any temporary or permanent arrangement. In those circumstances Article XXIV cannot be used.

“The European Union has made it clear on a number of occasions that full tariffs will be applied to the United Kingdom in the event of ‘no-deal’.

Dr Fox added: “It is important that public debate on this topic is conducted on the basis of fact rather than supposition, so that we are able to make decisions in the best interests of our country.”

But Steve Baker, an ardent Brexiteer and supporter of Mr Johnson, hit back and said: ‘By stating the obvious, by repeating common ground as if there were any disagreement, Liam is ludicrously tilting at windmills.

‘He’s done much to promote trade and freedom but I couldn’t be more disappointed in him here.’

EU sources told The Sun Mr Johnson’s strategy was ‘not going to fly’.

‘This is an old UK idea, to secure the parts you like and forget the rest,’ one said.

‘But it’s a package.

‘What is missing is finances and the backstop, so he would get all he wants. And you’d need our agreement for that. It’s nonsense.’

Another source added: ‘Boris can bullsh** all he likes. We’ve been here before.’

It came as Mark Carney, the Governor of the Bank of England, sought to clarify an apparent row between him and Mr Johnson over Gatt 24.

The former foreign secretary had said Mr Carney was ‘wrong’ to suggest a standstill trading arrangement with the EU was not possible – if that was actually the Governor’s position.

But Mr Carney suggested today in front of the Treasury Select Committee that the two men were actually in agreement on the matter.

He said: ‘If one is asked can you have No Deal and Gatt 24 well, an agreement is a form of deal an agreement to use Gatt 24 at least in my understanding of the English language – I recognise I am from Canada but these are relatively small words and I think I understand them.

‘So there needs to be some form of agreement and an intention and a credible intention to move towards a free trade or customs union.’

Mr Carney said Mr Johnson had acknowledged the need for both sides to agree to such a standstill when he set out his ‘Plan B’.

‘There needs to be an agreement and I believe that was Plan B as described yesterday,’ he said.

Mr Carney also claimed that Brexit business uncertainty was now higher than even before the March 29 cliff-edge but said financial markets remained optimistic about a deal being done.

He said: ‘In terms of our conversations with businesses around the country… the degree of uncertainty is as high as it was just prior to the March 29 deadline amongst those businesses. If you squint marginally it has gone up a bit.’

Boris Johnson has been pictured wearing the same pair of socks on three days in the last week.

The Tory leadership favourite was seen sporting the distinctive hosiery at a hustings event in Birmingham on Saturday.

He also wore identical footwear in footage of interviews on Monday night yesterday – raising questions about whether he has run out of clothes after being forced to flee the south east London flat where he has been living.

The £5.99 socks bought from the British Museum shop depict King Ashurbanipal, who was ruler of the Neo-Assyrian Empire. 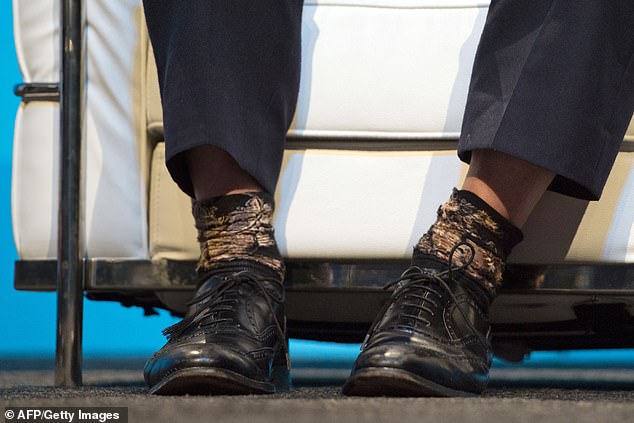 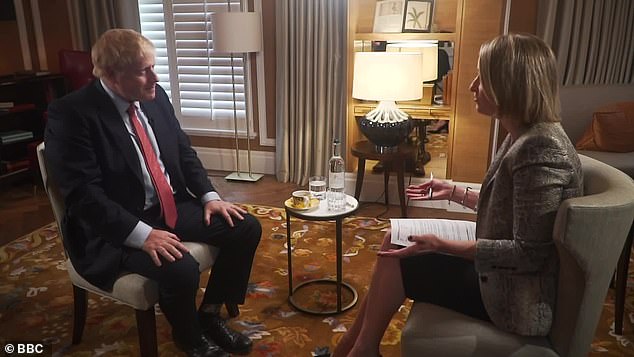 At the time of his reign between 669 and 631 BC, it was the largest empire in the world and stretched from Cyprus in the west to Iran in the east. Its capital Nineveh was the world’s largest city.

King Ashurbanipal called himself ‘king of the world’.