Revealed: The ‘blasphemous’ scenes from Life of Brian that even the Pythons were too afraid to show including an embarrassed Joseph trying to explain the Virgin birth

By Chris Hastings Arts Correspondent For The Mail On Sunday

When Monty Python’s Life Of Brian was released in 1979, it was met with outrage around the world.

But the comedy classic would have offended even more people if the original version of the script had been filmed.

Papers unearthed by The Mail on Sunday from the British Library archive of Python star Michael Palin reveal that the movie’s working title had been Monty Python’s Life Of Christ, and the script included outright blasphemy.

The original script for the 1979 movie Life Of Brian has been revealed with dozens of scenes not making it to the final film. Pictured is actor Graham Chapman playing the title character

The movie that was finally released carefully avoided any jokes at the expense of Jesus, who was depicted with respect in two brief scenes.

The film-makers were anxious to avoid being prosecuted for blasphemy and cut some of the original material after advice from lawyers.

One lost scene featured a waiter at The Last Supper trying to seat Jesus and his Disciples, telling them: ‘I can do you two tables for two and two threes.’

In another excised moment, Jesus’s embarrassed father Joseph struggles to explain the Virgin Birth to a group of his male friends. 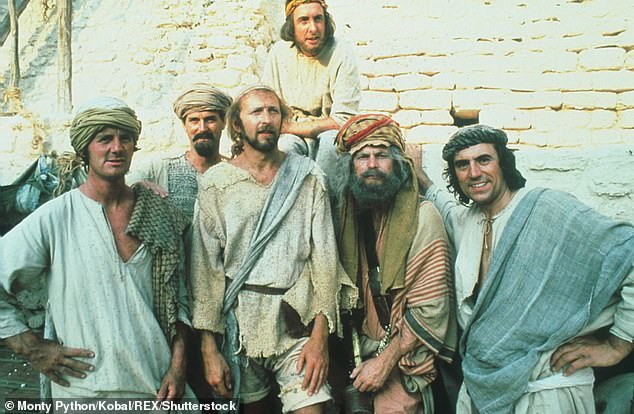 Filmmakers were anxious to avoid being prosecuted for blasphemy and cut some of the original material. Pictured are the cast from the film 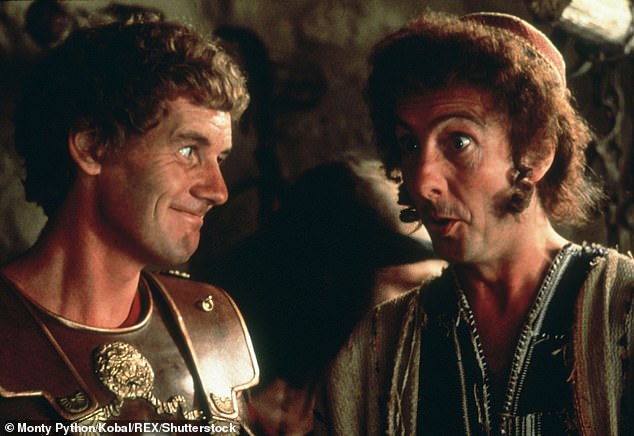 One moment which didn’t make the cut would have been Jesus’s embarrassed father trying to explain the Virgin Birth to a group of his male friends. Pictured are Michael Palin and Eric Idle

Several key figures from the Gospels who were noticeably absent from the film were considered for inclusion.

One note describes how ‘John the Baptist’s severed head keeps talking’ while another described King Herod as ‘the world’s worst babysitter’.

Herod was also shown pondering how best to deal with the threat posed by the infant Jesus.

As an alternative to the massacre of the Innocents, a courtier suggests: ‘Why don’t we offer a reward to anyone who brings the Messiah to us?’ Brian did not meet Jesus in the film, but that was not the case in the early version, in which he is the ‘13th Apostle’. 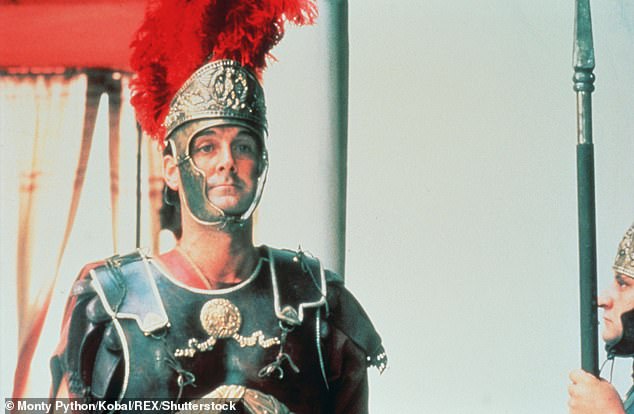 While one note described how ‘John the Baptist’s severed head keeps talking’ and another described King Herod as ‘the world’s worst babysitter’. Pictured is actor John Cleese 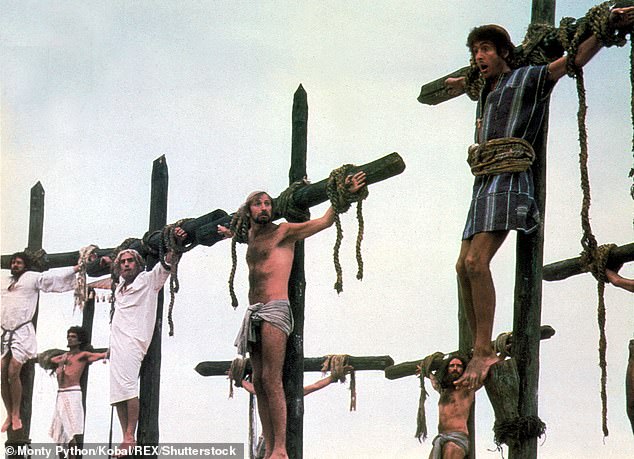 Life Of Brian was banned in several countries, including Norway and Ireland, and by councils across Britain when it was released in 1979. Pictured is a scene from the movie

Palin’s handwritten notes depict the title character as a religious figure in his own right, with references to ‘St Brian’, ‘St Brian’s Gospel’, ‘Brian Setting up the Catholic Church’ and ‘St Brian the only Martyr to die of old age’.

One suggested ending included a reading from ‘The Martyrdom of St Brian which charted his early life; his sexual antics with some “Maidens of The Orient” and his eventual ascent to Heaven where he “dwelt amongst the Heavenly host”.’ The Pythons were also advised to abandon plans to portray Brian’s mother Mandy as a virgin.

Life Of Brian was banned in several countries, including Norway and Ireland, and by councils across Britain.

Aberystwyth in Wales didn’t allow the film to be shown until 2009.