Boris Johnson’s ex wife Marina Wheeler has described the dying days of their marriage as ‘impossible’ – revealing that she had ended the union for the first time.

The 56-year-old author and lawyer said the breakdown of their relationship happened as she was battling cervical cancer.

Ms Wheeler said ‘The divine plan, it seemed, had gone awry’ as she spoke of the 25-year marriage for the first time.

And she disclosed the process of separating from her husband had been ‘grinding’.

Her comments emerged today just six weeks after the Prime Minister and Carrie tied the knot in a secret Westminster ceremony.

‘My four children and I already had tough stuff to handle.

‘My 25-year marriage had become impossible, so I ended it, but the whole business was grinding, so why was I being doled out more? 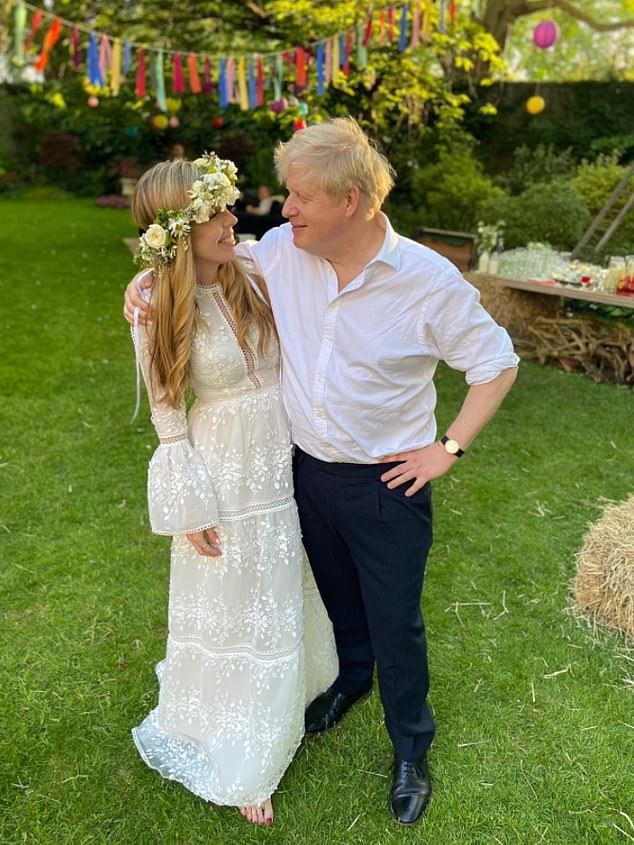 ‘Of course, that’s not how cancer worked. Two years on, I can see I was lucky,’ she told the Mail’s Sebastian Shakespeare.

The pair announced in September 2018 they had separated ‘several months ago’ after 25 years of marriage.

But divorce proceedings continued until November 2020 when the union was finally dissolved.

They tied the knot in 1993 and have four children together.

Her comments come less than a week after his latest wedding, which attracted controversy itself over where it took place.

The Prime Minister is notoriously secretive about his private life and jokes are still made over how many children he has fathered.

The row this week was over how twice-divorcee Mr Johnson had been allowed to remarry in a Catholic church. 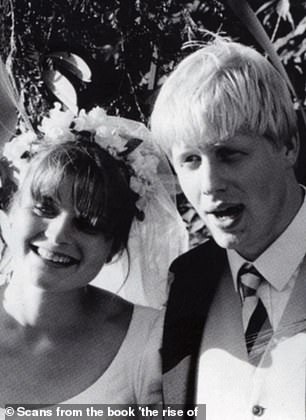 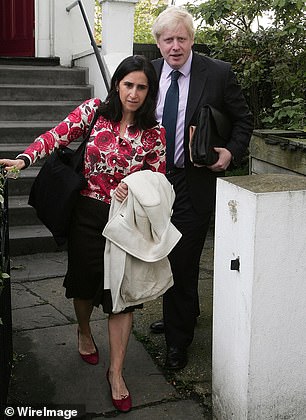 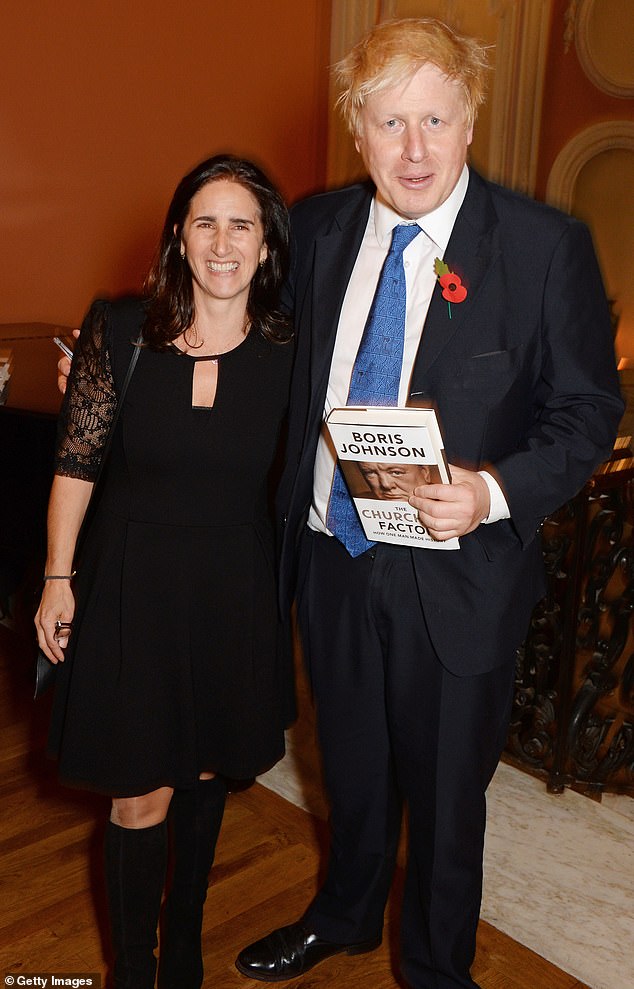 The Prime Minister was baptised as a Catholic but was confirmed as an Anglican as a teenager when he was at Eton.

But the Diocese of Westminster said, as someone baptised in the faith, it meant his previous failed marriages were not considered valid because they were not Catholic ceremonies.

It prompted a row over how Mr Johnson’s ex wives must feel and what it meant for the children he had with them.

One priest claimed it had been ‘The using of Canon Law to the benefit of the privileged & at the cost of the Church’s integrity’.

The baptism meant the Prime Minister could marry for the ‘first’ time in a Roman Catholic church.

This week a Diocese of Westminster spokesman confirmed: ‘With regard to divorced persons, a baptised Catholic who has contracted a marriage recognised in civil law but without observing the requirements of Catholic Canon Law is not recognised as validly married in the eyes of the Catholic Church.’ 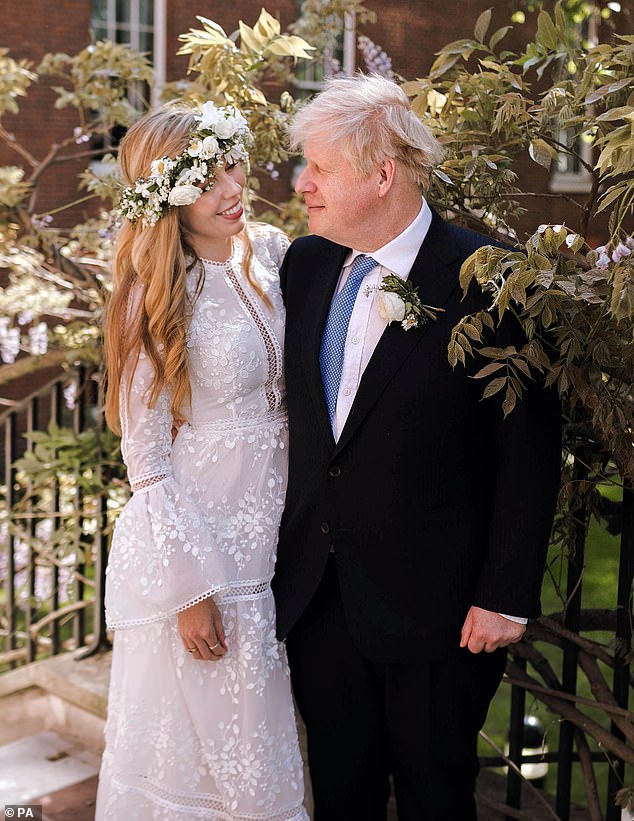 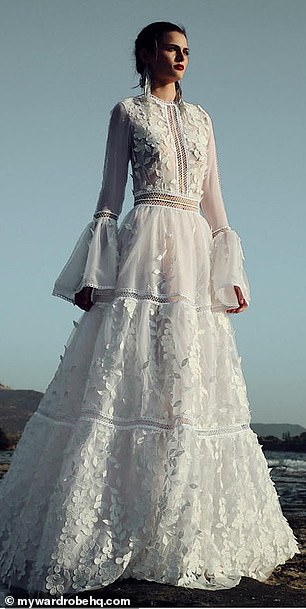 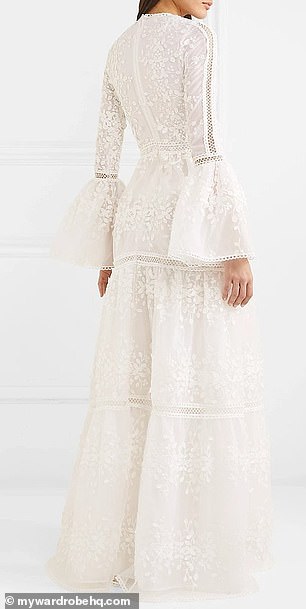 The 33-year-old bride, who hired her £2,870 wedding dress by designer Christos Costarellos for just £45 from MyWardrobeHQ, said she was ‘very, very happy’

Carrie Symonds hired three decoy dresses to throw snoops off the scent before their secret marriage.

She rented the dresses from eco fashion business My Wardrobe HQ and returned the one she settled on for £45 from Greek designer Christos Costarellos.

Created as part of an exclusive bridal capsule, the gown (which sells for £2,870 full price) was handmade from tiers of wispy ivory tulle spun with silk, while the latticework trims and hand-cut ‘Kopaneli’ corded lace appliqués are signatures of the atelier and woven using traditional Greek patterns.

The new Mrs Johnson, 33, often orders clothes to the couple’s Downing Street home so wanted to throw snoops off the scent by hiring three other bridal frocks. 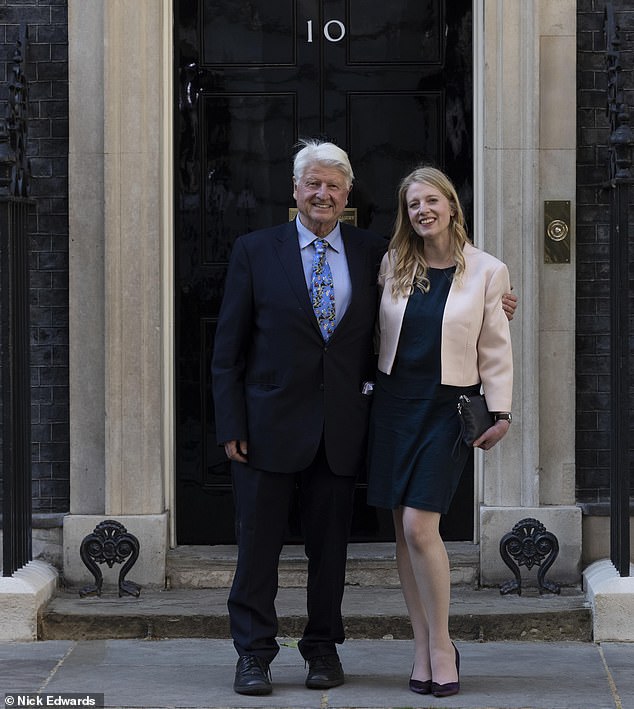 The couple tied the knot in secret at Westminster Cathedral on Saturday before celebrating with a small group of family and friends at a summer festival-themed party in the Downing Street garden. Pictured: Stanley Johnson with his daughter Julia outside 10 Downing Street yesterday 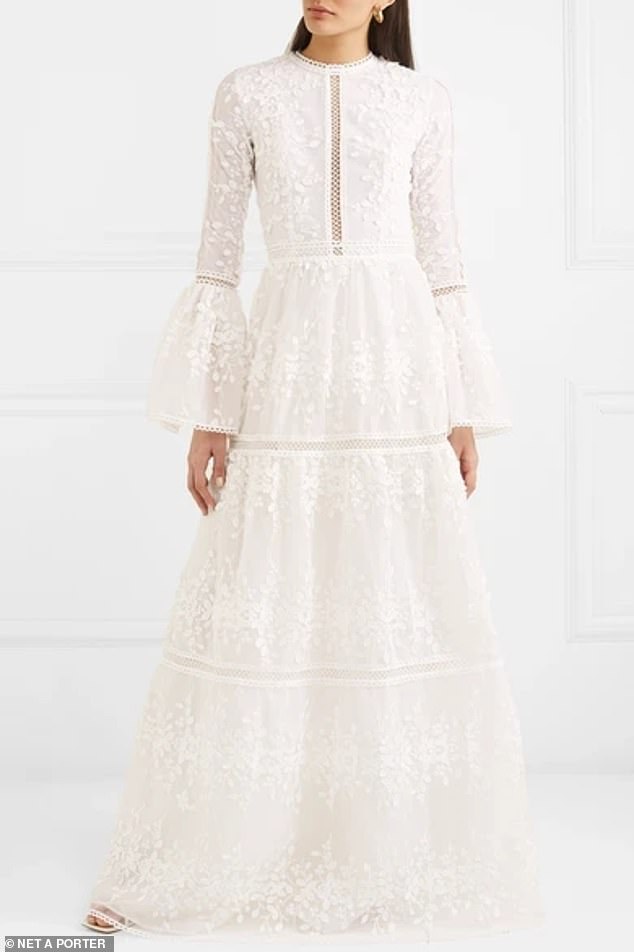 Created as part of an exclusive bridal capsule, the ethereal gown is handmade from tiers of wispy ivory tulle spun with silk, while the latticework trims and hand-cut ‘Kopaneli’ corded lace appliqués are signatures of the atelier and woven using traditional Greek patterns

The company she ordered the dresses from only found out they had supplied the wedding dress for the UK’s first lady when they saw pictures of the secret wedding.

Co-founder Sacha Newall told The Times: ‘We didn’t know what it was for. We were just asked to supply some items. Then we saw what happened this weekend. It was all a bit of a surprise.’

They revealed that Mrs Johnson has asked for four dresses in a variety of shades.

And it’s not the first time Mrs Johnson has worked with the company – she used their services when she was finding a dress to meet the Queen at Balmoral in 2019.

Ms Newall added that while Carrie isn’t particularly into fashion she is making an effort to take an interest.

She said: ‘There is an awareness that as the prime minister’s wife she needs to be dressed in a certain way… She doesn’t want to feel that she is letting the side down.’

And the first time Carrie was spotted standing next to Mr Johnson on the steps of Downing Street in her iconic pink Ghost dress, she had rented the frock from My Wardrobe HQ.