Motorists have miraculously avoided injury after a horror car crash caused a light pole to fall straight into the path of oncoming traffic.

Shocking dashcam footage captured the moment a Suzuki Swift slammed into a BMW that had cut in front of it on the Princes Highway in Melbourne’s south-east on Monday night.

The force of the collision pushed the BMW straight into a light pole positioned in the centre of the road between two lanes of traffic.

The footage then shows the large pole falling to the ground, landing just a few centimetres away from the Suzuki.

Michael Nibaldi, who captured the footage on his dashcam, can be heard screaming as the cars plough into each other and the pole begins to fall.

‘I was in shock, I was really feeling for both drivers,’ he told Nine News. 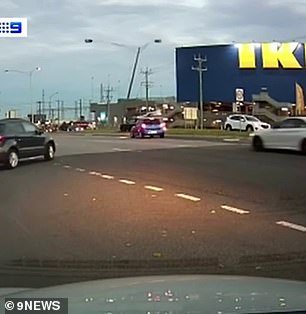 ‘For a minute I thought the Suzuki was going to be flat-packed.’

But luckily for everyone on the road, the drivers came off shaken but unscathed.

‘If there is a God he may well be Swedish,’ he said in reference to the Ikea store near where the accident happened.