And Lily James and her co-star Sebastian Stan, 38, were seen heading to their trailers after a busy day of filming in Los Angeles, California, on Friday.

The actress, 32, was seen ditching her blonde wig in favour of her natural brunette locks as she went out for a stroll during a break from set. 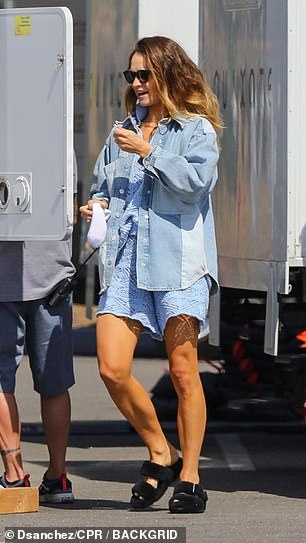 Quick change: Lily James ditched her blonde wig for her natural brunette locks as she headed to her trailer during a break from filming Pam and Tommy with Sebastian Stan in LA on Friday

After leaving her trailer, Lily slipped on a denim jacket and she opted for ultimate comfort by wearing fluffy black sandals.

Sebastian was a dead-ringer for his real-life counterpart Tommy as he teamed a black top with dragon-print shorts and a hoodie.

Channelling the Mötley Crüe rocker, Sebastian stepped out in black Converse and he styled his dyed-black locks in a slicked-back style. 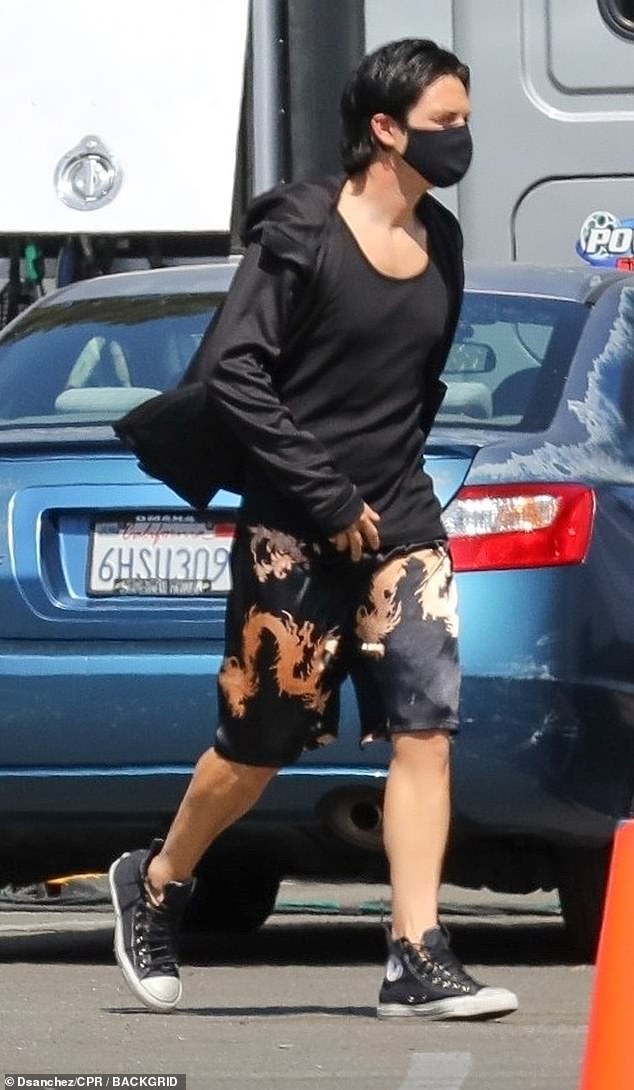 Rocker: Sebastian was a dead-ringer for his real-life counterpart Tommy Lee as he teamed a black top with dragon-print shorts and a hoodie

The upcoming Hulu series is based on Pamela’s tumultuous three-year-marriage to rock star Lee which saw them tie the knot in 1995 and take part in their notorious sex tape.

Pamela and Tommy, 58, – who had two kids together, sons Brandon, 24, and Dylan, 23 – were considered to be one of the wildest celebrity couples of their time.

‘Here’s a peek at Pam & Tommy, coming to @Hulu. Based on the true scandal that started it all, featuring Lily James, Sebastian Stan and @SethRogen … ready to rewind? #PamAndTommy, ‘ the tweet read.

However, Pamela has reportedly branded the show ‘a joke and cheap knock-off’ according to a source report earlier this week. 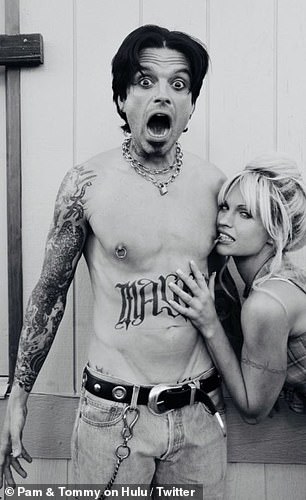 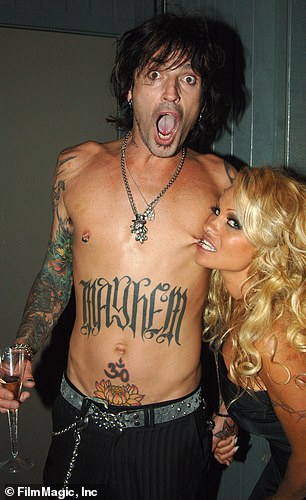 Drama: Lily and Sebastian portray Pamela Anderson and Mötley Crüe rocker Tommy (right in 2005) in a new Hulu series that is based on their tumultuous three-year-marriage

Insiders told The Sun that the star deems the ‘God awful’ program ‘a joke’ and has never heard of Lily or Sebastian, who have already been praised for their transformation – although seemingly without Pamela’s seal of approval.

‘Pamela has no intention of watching this God awful show, absolutely not. Never…,’ a source told the publication.

‘She’s never heard of the actors playing her or Tommy, and doesn’t care to know them. She and her family think the show is a cheap knock-off.’

The insider then added: ‘The whole thing is a joke to them.’ 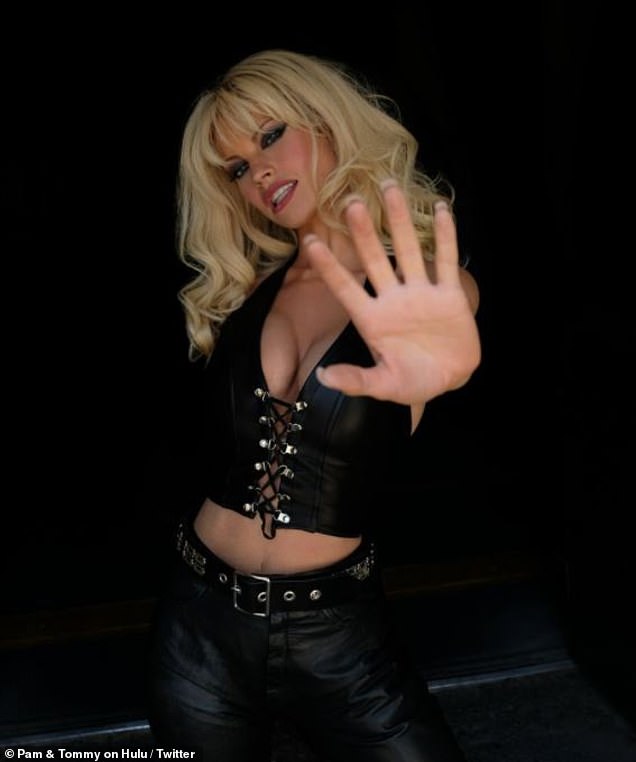 Wow! First look images showed Lily and Sebastian bear an uncanny likeness to the iconic couple, however it seems the model, 53, is less than impressed at the forthcoming show

Lily and Sebastian showed off their incredible resemblances to the former couple last Friday as they appeared to mimic the famous 2005 photo of Pamela, 53, tugging on Tommy’s, 58, nipple ring with her teeth.

While a different snap saw Lily in an all-black leather outfit that highlighted her cleavage in a black leather vest as she transformed into the blonde bombshell.

The raunchy photos were shared on the Twitter page for the Pam And Tommy series on Friday. 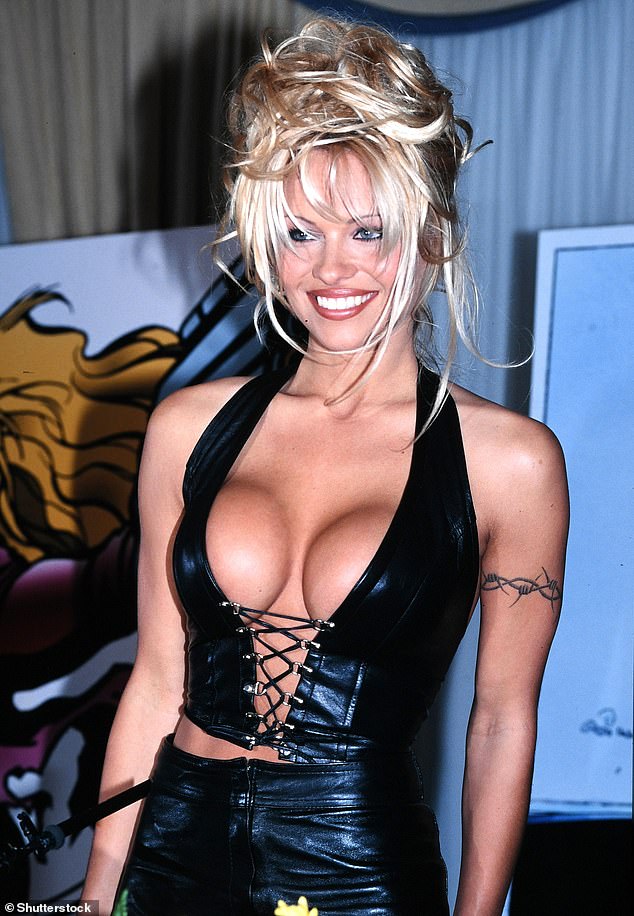 Unhappy: A source recently said Pamela ‘has no intention of watching this God awful show, absolutely not. Never… ‘She’s never heard of the actors playing her or Tommy’ (Pictured; 1995)

In a black-and-white photo, Sebastian went shirtless with drawn on inkings, he also wore a pair of high-waisted jeans, chain belt and a padlock necklace.

The actor sported a similar shaggy hairdo and soul patch to the Mötley Crüe drummer.

Lily wore a racy plaid top and showed off a Barb Wire tattoo on her arm, while also wearing her blond wig styled up.

While some have marveled at the potentially wacky idea of re-telling the pair’s love life for a TV show, it is certainly being helmed by some top talent.

The television show is being directed by Australian filmmaker Craig Gillespie, who directed the Oscar-winning movie I, Tonya starring Margot Robbie and Allison Janney. 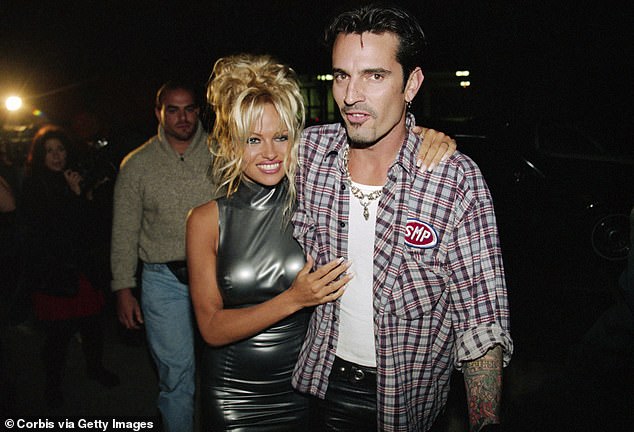 Former flames: Pamela and Tommy – who had two kids together, sons Brandon, 24, and Dylan, 23 – were considered to be one of the wildest celebrity couples of their time (pictured in 1995)