She’s been nearly unrecognizable in recent photos of her transformation into Pamela Anderson for a new miniseries about the actress.

But Lily James had reverted to her classic style on Sunday when she was spotted in West Hollywood with her boyfriend Michael Shuman in tow.

The 32-year-old English actress and the Queens of the Stone Age bassist were seen together as they visited a friend.

Coupled up: Lily James, 32, was spotted in a summery casual ensemble as she visited a friend’s house in West Hollywood with her musician boyfriend Michael Shuman

The top featured a frilly that she wore down casually over one shoulder.

The 5ft7in beauty also had on a relaxed pair of high-waisted jeans that were frayed at the hems, along with a set of thick wooden slide sandals with black straps.

Brunette locks were partially tied up in a messy bun while the rest cascaded down her shoulders in waves. 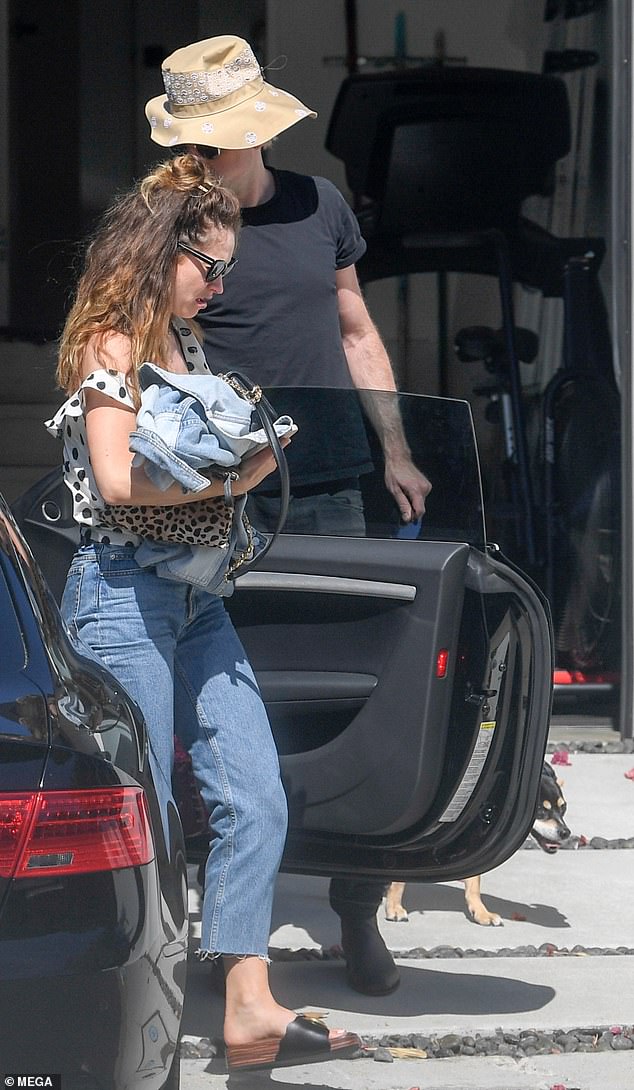 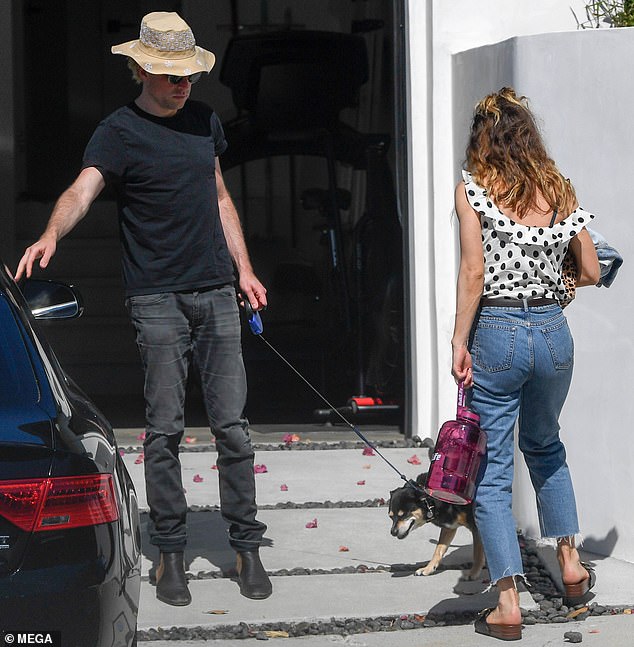 Back in black: Her boyfriend Michael, the bassist for Queens of the Stone Age, was dressed in all black and had a cute black-and-tan dog on a leash

She blocked out the piercing sun with black sunglasses and carried along a denim jacket and a cheetah-print handbag, plus a large purple water jug.

Michael had a cute black and tan dog on a leash and was dressed in all black with a plain T-shirt, dark jeans and boots.

He cut down on his sun exposure with a tan floppy hat.

The couple’s relationship seems to be heating up, and earlier this spring they were spotted visiting Michael’s parents in Los Angeles.

Back in October, DailyMail.com published photos of Lily kissing her costar Dominic West during a romantic getaway in Rome, despite him being married. 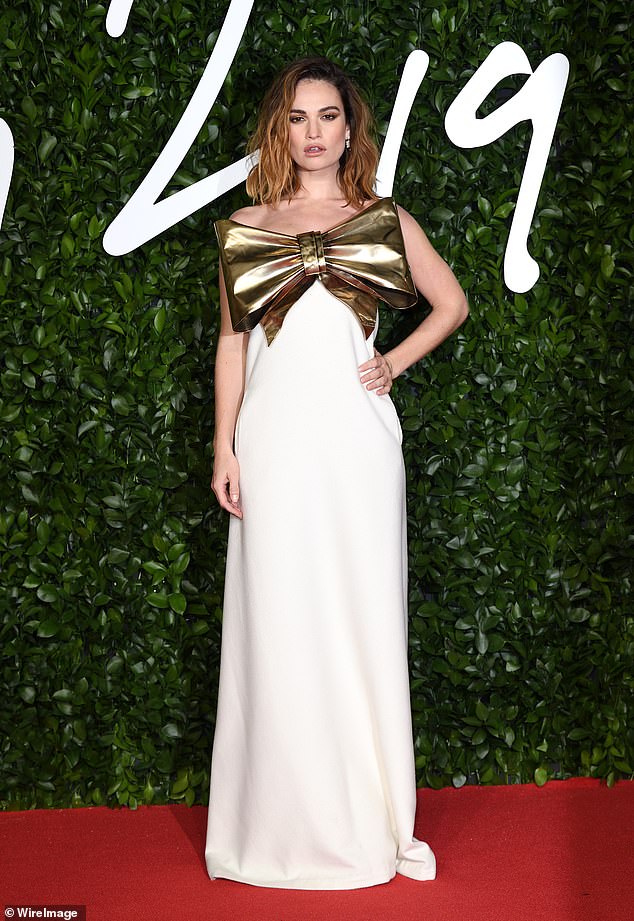 New love: Lily has recently been getting serious with Michael after visiting his family in LA back in April. Back in October she was spotted kissing her married costar Dominic West on a romantic getaway in Rome; seen in 2019 in London

Shortly beforehand, she was reported to have split from her longtime boyfriend, Dr. Who star Matt Smith.

The two had dated for five years before calling it quits in December 2019, only to briefly reunite in May of last year.

There were also romance rumors between Lily and Captain America star Chris Evans after the two were seen spending time together in London in July. 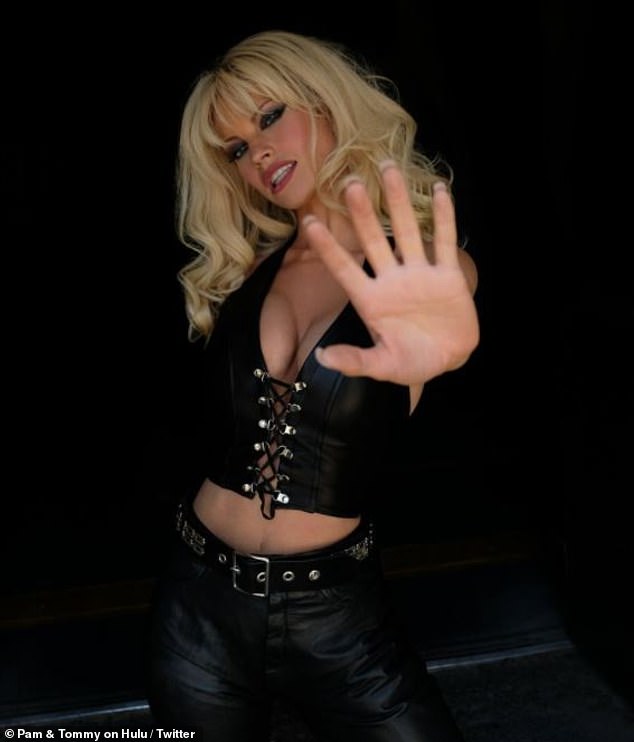 Blond bombshell: The actress’ next big project will see her portraying Pamela Anderson for the Hulu miniseries Pam & Tommy

The actress’ next big project will see her portraying Pamela Anderson for the Hulu miniseries Pam & Tommy.

She looks shockingly like the Baywatch star in set photos from the production, and the look was achieved via standard makeup and a blond wig, as well as prosthetics, including a fake bust.

She stars with The Falcon And The Winter Soldier’s Sebastian Stan, who plays Pam’s real-life husband Tommy Lee.

The series, which is directed by I, Tonya’s Craig Gillespie, follows the famous couple in the aftermath of their infamous sex tape and its theft. 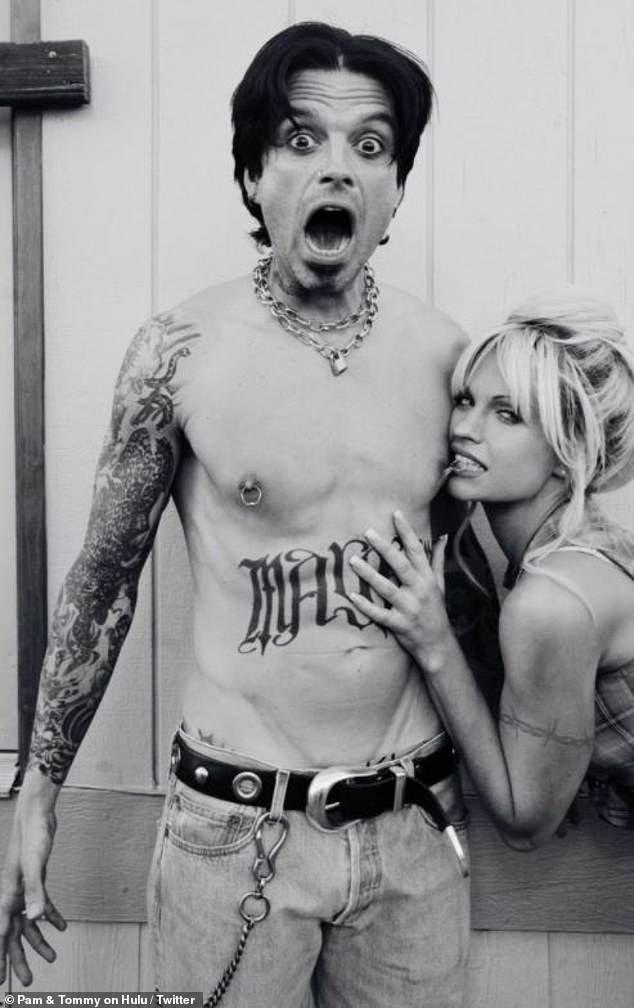 Iconic couple: Sebastian Stan stars as her rocker husband Tommy Lee around the time the couple recorded their infamous sex tape, only for it to be stolen