‘You don’t need to see the physio for a cut!’ Jesse Lingard worse for wear as he attempts to recreate Ole Gunnar Solskjaer’s strike against Bayern Munich alongside Marcus Rashford

Manchester United have a weekend of celebrations lined up for the 20th anniversary of their famous Champions League victory over Bayern Munich. They will undoubtedly be hoping they go smoother than a Jesse Lingard knee slide.

Lingard and Marcus Rashford combined to recreate manager Ole Gunnar Solskjaer’s famous United goal against Bayern – the stoppage time winner at the Nou Camp in 1999 – but it came at a cost for the midfielder.

At their fourth and final attempt, Rashford glanced a header towards Rashford just like Teddy Sheringham did to Solskjaer. 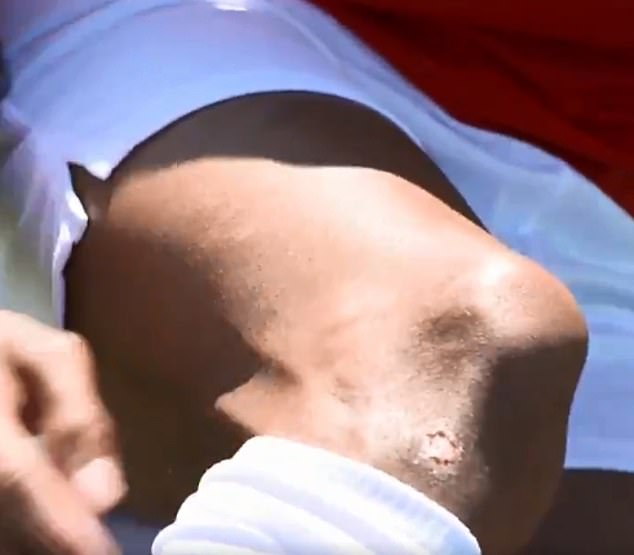 After screaming in pain, Lingard explained that he had taken the scab off of his knee

And after Lingard duly converted like his manager did 20 years ago to win United’s second European Cup and complete a historic treble, he ran off to celebrate by sliding on his knees.

But with the ground being so dry, Lingard manged to hurt himself by taking a small scab off his knee when he hit the turf.

In a moment that would have given Solskjaer the manager a genuine cause for concern upon watching, Lingard shouts in pain before rolling over grabbing his right knee.

He then pulls his sock down and explains, with a grimace, that ‘I took the scab off my knee.’

After a few more groans, Lingard turns to Rashford for sympathy, saying: ‘Look at that. It’s white. I knew that would happen.’

But when he mentions going to see the United physio for the problem, Rashford shoots him down.

‘You don’t go and see the physio for a cut. Just go and get a plaster,’ Rashford said.

To commemorate one of their most remarkable results in their fabled history, United welcome Bayern to Old Trafford on Sunday for the 20th anniversary match of the final.

Sir Alex Ferguson will return to the dugout at Old Trafford for the fixture, which will see former stars such as David Beckham, Peter Schmeichel and Gary Neville take to the pitch.