Lions go wild when they see their ‘godmother’ in Slovakia

This is the heartwarming moment two rescued lions went crazy when they came face to face with the woman who helped to raise them.

Malkia and Adelle were rejected by their mother when they were cubs and were handed over to a big cat rescue centre in Slovakia.

Their parents had been used in circuses across the Eastern European province. 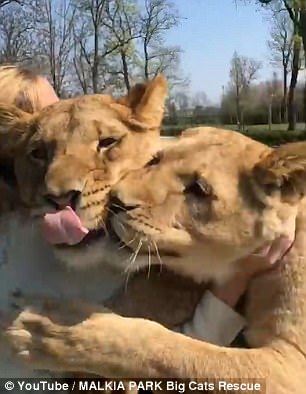 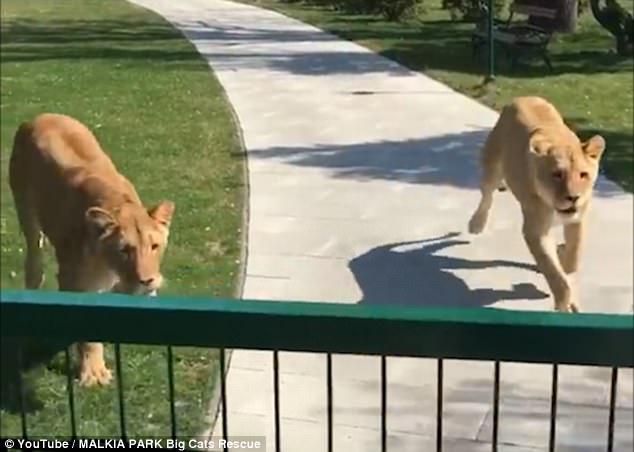 Excited: The two cats come bounding towards Michaela at the big cat centre in Slovakia

They grew up with humans as their parents and now an adorable clip shows the pair’s reaction when they see Michaela Zimanova, their ‘godmother’, for the first time in weeks.

Bounding up to her, the duo are overcome with excitement in the YouTube, video which has amassed more than 40,000 views.

Both cats can be seen standing on their hind legs to greet her, as they close in for a hug.

They even wrap their paws around her neck and squeeze her in a gigantic display of affection.

Michaela visits Malkia Park in Slovakia up to three times a month to see them and is one of three people allowed such close contact with the animals. 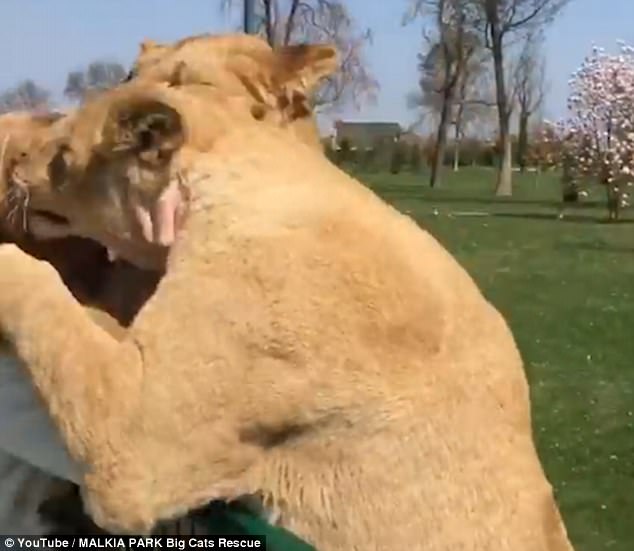 Big hug! The pair of lions who are three and four were given to the park by a private owner after their parents wouldn’t take to looking after them

A spokesman for the park told MailOnline their footage had been taken and it was incorrectly being reported that Michaela had been separated from the lions for seven years.

‘That’s not the case, Michaela comes to see them sometimes three times a month,’ the spokesman explained.

In the video, Michaela can be heard saying: ‘Ajoh zlatíčka, bambulky’ or ‘Hello darlings’ in Slovak to her favourite cats.

A spokesman said: ‘We never play with them as they are dangerous animals, we respect their mood, and only cuddle when they want.

‘It always takes only those few minutes what you see on the video, sometimes less.

‘Then they continue running and playing together. At the age of four, Malkia is a little bit different, she is more wild, so we need to be more aware.’

The pair of lions who are three and four were given to the park by a private owner after their parents would not take to looking after them.

The Big Cats Rescue Centre in Slovakia looks after abandoned and needy animals.