Conflicted AF: Lisa Bloom reportedly launched investigations into some of the women who accused Harvey Weinstein of sexual assault (above earlier this month)

Lisa Bloom showed no care or consideration for at least three women who claim they were victims of sexual assault according to a new report.

The lawyer was also part of the team that recorded at least one victim according to sources, who claim the operation was launched as early as April.

Bloom’s goal according to the report was to kill stories abut Weinstein, and she was reportedly very active in trying to halt exposes by The New York Times and NBC.

She was unsuccessful on both counts, with the Times publishing two exposes in addition to over 20 other articles about the scandal and the NBC report being taken to The New Yorker when executives passed on the project.

The report claims that McGowan was ‘actively investigated’ by Bloom beginning in July while documents from Italy were gathered in hopes of discrediting Battilana from speaking to the media.

Those two women ended up being front and center in both exposes, despite neither breaking their NDA to speak to the outlets.

It is unclear when Bloom began working for Weinstein, but it appears to have been at some point late last year.

Then, in April, she reportedly began looking through the Weinstein Comapny NDA agreements and reports on a least one person accusing Weinstein of sexual assault.

This all makes it difficult to understand Bloom’s appearance on ‘Good Morning America’ one day after the Times expose in which she said that her client’s misconduct did not exceed the level of ‘gross.’

The Daily Beast reported on Thursday that Bloom told Ronan Farrow of the dossier while he was writing his exposé on Weinstein, who McGowan has accused of raping her in 1997 at the Sundance Film Festival.

Bloom wanted to hand over this material despite the fact that McGowan cannot legally speak about the incident because she signed an NDA after receiving a $100,000 settlement from Weinstein.

‘I don’t know if you’ve talked to Rose McGowan, but we have files on her and her sexual history,’ Bloom allegedly told Farrow according to NBC sources.

Bloom would not comment on that claim, but did write on Twitter: ‘Attorneys must maintain confidentiality even when awful, untrue things are said about us. Welp, I did sign up for this.’

At the time, Bloom had already managed to get ‘New York’ to kill a piece about Weinstein which had been scheduled to run in late 2016, around the time she first learned about the mogul’s alleged sexual misconduct.

McGowan had reportedly sat down for an interview with Farrow for his story, only to remove herself as the publication date neared due to the legal angle of her NDA.

Meanwhile, lawyer Thomas Ajamie said that he was sitting with Bloom and Weinstein back in January while the disgraced movie mogul bragged about all the women he had bedded in Hollywood.

‘Look I’m a famous movie producer, everyone wants an Academy Award, I can really help their careers,’ Weinstein reportedly said in front of Bloom, who still kept him as a client despite this admission.

Bloom reportedly pointed out to Weinstein that he was married, and asked if he was cheating on wife Gerorgina Chapman, to which he replied: ‘Well, yeah, Lisa, this is Hollywood and this is what happens.’

She apparently dropped the conversation at that point according to Ajamie, who claims Bloom responded by saying: ‘OK, I’m just a little taken aback by this. But I’m not judging you or anything. I’m not judging.’

The claims about Bloom’s discussions with Farrow and file on McGowan are most damning as they seem to contradict previous statements made by Bloom.

The lawyer, whose clients are usually victims of sexual harassment and/or assault, reportedly called Farrow up to ask him about a story he was doing involving NDAs and offered to help him with the piece.

Bloom first contacted Farrow 10 months ago according to sources and stayed in touch, offering up her client Blac Chyna as a source on NDAs at some point after she began representing Rob Kardashian’s estranged fiancee back in July.

She did not let Farrow know she was working with Weinstein however, and the journalist also kept quiet about the subject of his story at first. 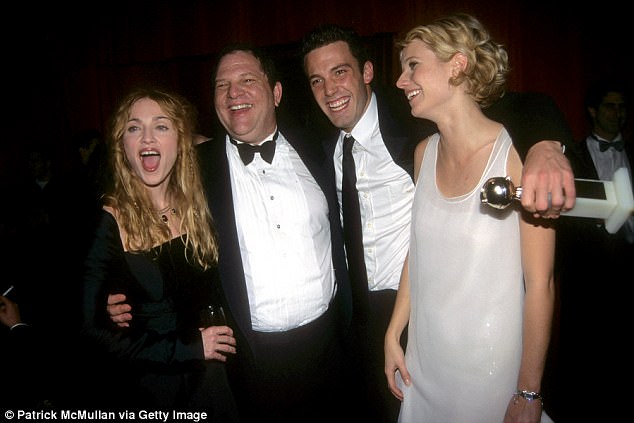 Power player: Bloom, who reportedly killed a ‘New York’ story about Weinstein last year, was part of the team pressuring The New York Times and NBC to drop pieces (l to r: Madonna, Weinstein, Ben Affleck and Gwyneth Paltrow in 1998)

It was when Farrow did finally admit that his story was on Weinstein that there was a shift, with the reporter believing he could trust Bloom given her clients up until that point had been fellow accusers, like those who spoke out against Bill O’Reilly at Fox News.

Soon after letters began to arrive, including one from Charles Harder in which the lawyer threatened to sue Farrow.

Bloom was listed as his co-counsel.

Those letters also stated that Farrow was biased due to his own family’s history of sexual misconduct allegations, with his father Woody Allen having been accused of assaulting his daughter Dylan, who is Farrow’s sister.

NBC at that point made the decision to pass on the story, and Farrow took it to the New Yorker.

The network has since said that the piece was not as strong as the finished product.

Dylan, who changed her name to Malone as an adult, broke her silence in the November 2013 issue of Vanity Fair, alleging that Allen molested her when she was just seven, telling her it was their ‘secret.’

She told her mother Mia in August 1992 that her father had been inappropriate with her in the attic and kissed her, claims that have been denied by Allen.

Dylan said the alleged abuse made her feel that she was a ‘bad kid’ and that she told her mother because she was ‘cracking’ and wanted Allen to stop.

She said in the interview; ‘There’s a lot I don’t remember, but what happened in the attic I remember. I remember what I was wearing and what I wasn’t wearing.’ 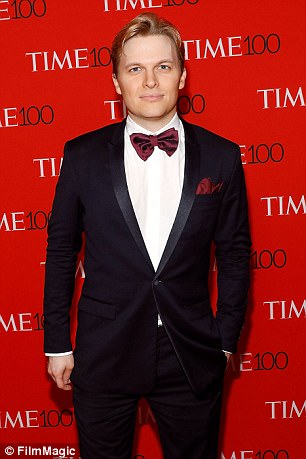 Steadfast: Ronan Farrow (above in April) is reportedly at work on a second Weinstein piece

When asked if it happened on multiple occasions, Dylan said; ‘That was isolated. The rest was just everyday weirdness -the weird routine I thought was normal.’

She called her fears of her father ‘crippling’ and said: ‘I’m scared of him, his image. Nobody wants to think this legendary filmmaker is my worst nightmare. That’s what scares me, when I picture things chasing me or happening—I think it’s him after me. It’s hard to explain how terrifying that is.’

Dylan also revealed said she once went into a ‘fit of vomiting’ after seeing a boy in her school wearing a shirt featuring her father.

The case was dropped in 1993 but custody of Dylan was awarded to her mother and Allen was denied visitation with his daughter.

Dylan did not take the stand, and said in the interview; ‘I have never been asked to testify. If I could talk to the seven-year-old Dylan, I would tell her to be brave, to testify.’

Following the molestation case, Mia moved her children from New York to Connecticut.

A few months prior to her alleged betrayal of Farrow, Weinstein Company optioned Bloom’s book about Trayvon Martin, Suspicion Nation: The Inside Story of the Trayvon Martin Injustice and Why We Continue to Repeat It.’

It was announced that Weinstein would be producing a series along with Jay Z based on Bloom’s work, which would be combined with a second book.

That book was ‘Rest in Power: The Enduring Life of Trayvon Martin,’ which was the subject of a heated bidding war as it is written by Martin’s parents Sybrina Fulton and Tracy Martin.

Bloom has been working to kill stories about her client and Weinstein’s friend and business partner Roy Price these past few months as well. The disgraced Amazon executive has since been ousted from the company.