Drawn to art? Then head to Lisbon, where you’ll find walls of beautiful blue-and-white glazed tiles, ‘artistic graffiti’ and a gallery beloved by Madonna

By Gary Edwards For The Mail On Sunday

Head to Lisbon, one of the world’s oldest cities, and you’ll discover it is also an astonishing open-air art gallery.

For hundreds of years, its walls have been adorned with glazed, ceramic azulejo tiles, and the predominantly blue-and-white ones have become synonymous with the Portuguese city and a major feature of walking tours.

The small polished stones were used to cover up the large areas of blank wall that were common inside buildings during the Gothic period, and they told stories about the city’s history, religion and culture.

Artistic graffiti is embraced, sponsored and promoted in Lisbon. Pictured is a mural by artist Shepard Fairey 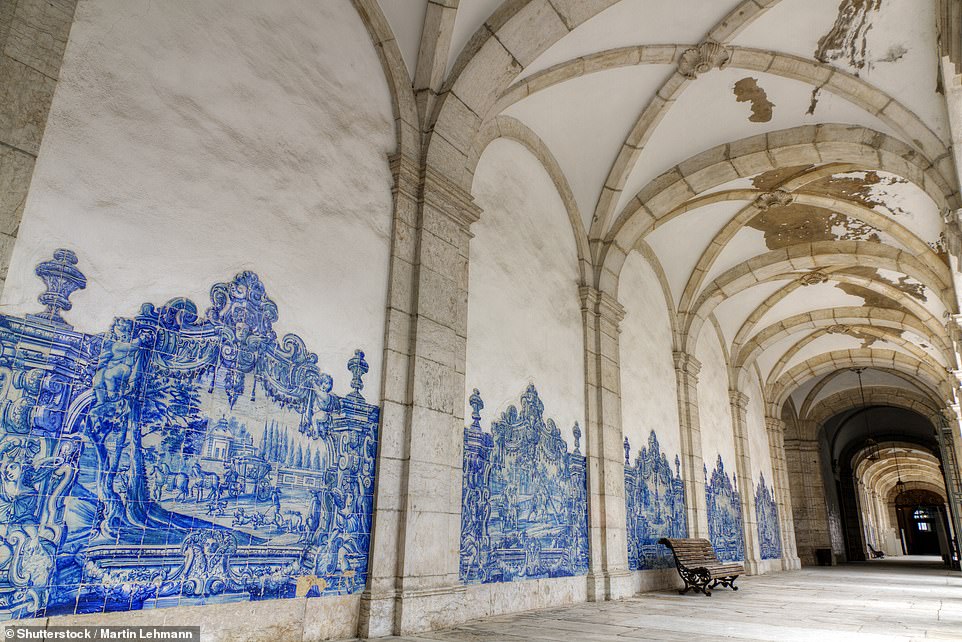 Azulejo tiles have become synonymous with Lisbon. Pictured is a walkway in the Sao Vicente de Fora monastery

Today, they still decorate churches, restaurants, bars, palaces and even homes, and are used extensively on street signs, public benches, along beach walls and stops on the Lisbon Metro.

They are also complemented with a more modern take from a new wave of street artists.

Following the Portuguese revolution of 1974, there was an explosion of political murals in Lisbon, and today it is one of very few places in the world where artistic graffiti is embraced, sponsored and promoted – and it’s everywhere.

One of the major driving forces behind the current scene is artist Alexandre Farto, who uses the name Vhils for his striking work.

Still only 34, his art adorns top galleries worldwide, but it is in his home city of Lisbon where you can see the greatest collection of his endeavours, with 12 major pieces still on display.

His gallery Underdogs (under-dogs.net) is in the Braco de Prata neighbourhood where Madonna, who is a frequent visitor and supporter, has a home. 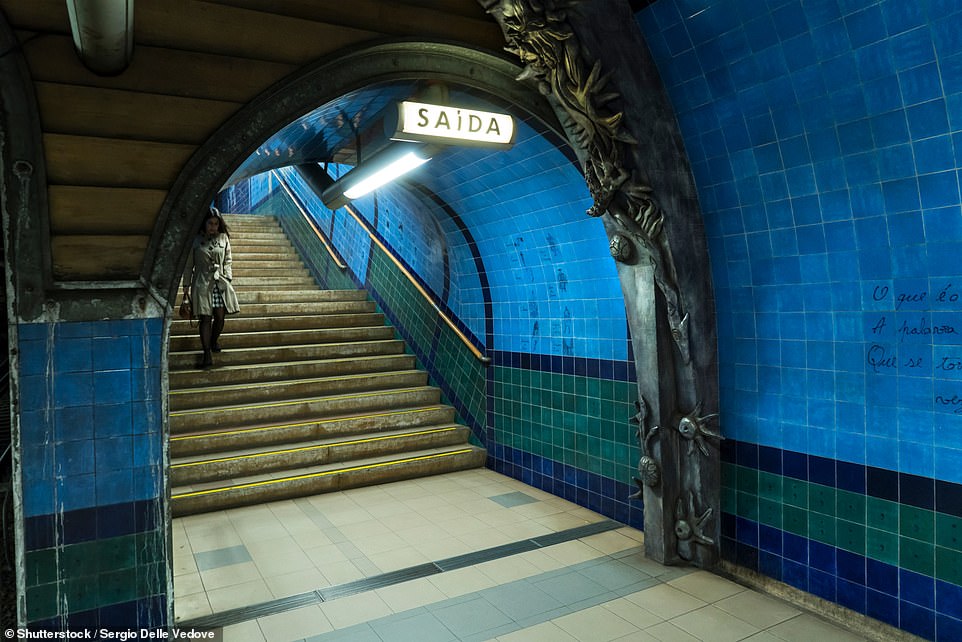 The tiles are used extensively on street signs, public benches, along beach walls and stops on the Lisbon Metro (pictured) 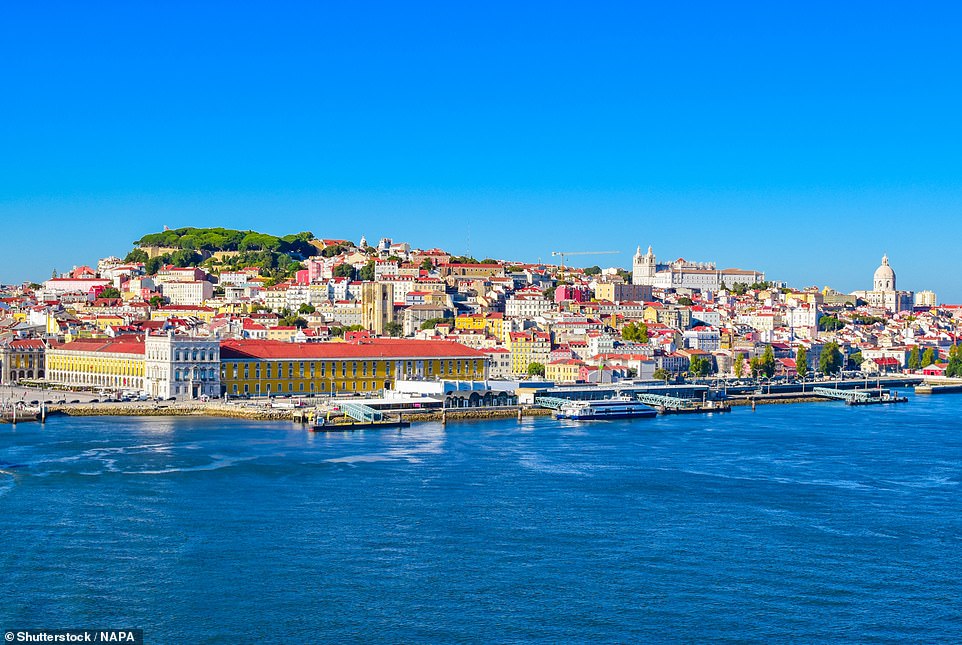 The Portuguese capital has become an astonishing open-air art gallery. Pictured is the city’s port

It specialises in local artists and public arts programmes as well as the print, video and sculpture work of Vhils. It also organises tours of the city’s street art.

Vhils also curates the Iminente Festival (iminente.org) which has taken place every September around Panoramico de Monsanto, a disused restaurant high on a hill overlooking the city, where you can find one of his creations – a portrait of the assassinated Brazilian politician Marielle Franco.

This year it’s moving Marvila, a former palace, in the east of the city. 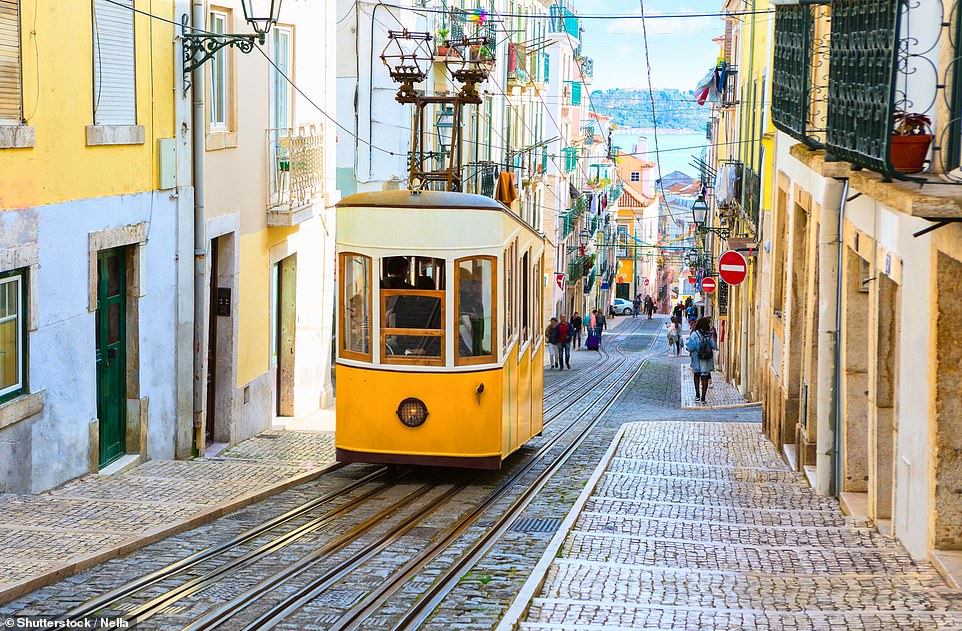 Lisbon, as well as being a haven for art-lovers, is one of the world’s oldest cities. Pictured is the city’s Bica tram 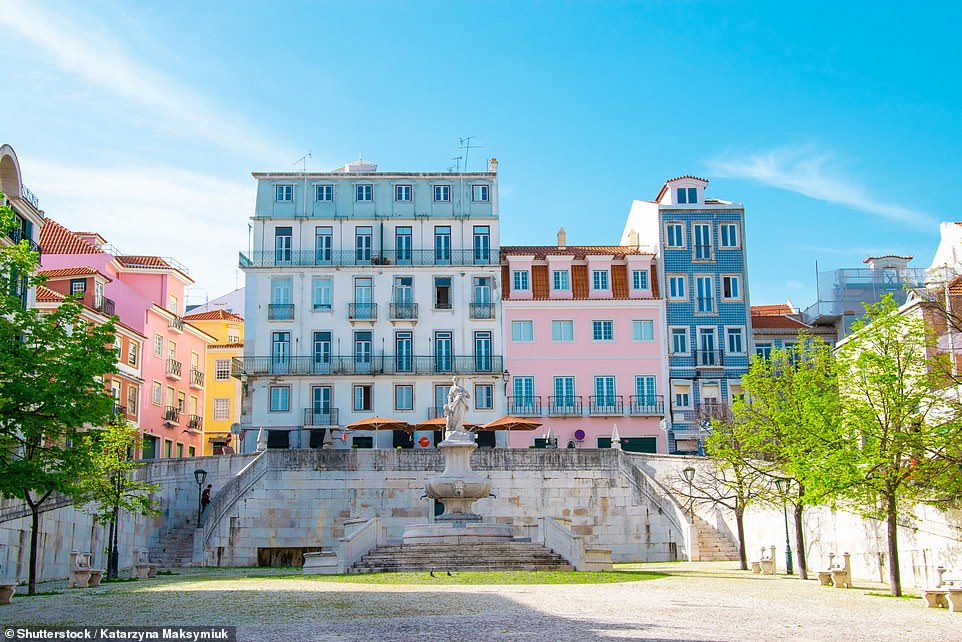 Book a street art tour of Lisbon at lisbonstreetarttours.com and on the three-hour stroll you’ll trace the history of the walls and discover other local street art stars.

Typical of the ethos towards street art in Lisbon, part of the cost – from £13 – goes towards creating new pieces to add to the city’s ever-growing collection.