A little girl celebrating her birthday was turned into a human fireball when a stunt next to the cake went horribly wrong.

Footage of the party, believed to have taken place in Argentina, emerged online showing the girl surrounded by her loved ones as she celebrated her 11th birthday.

After a rendition of ‘Happy Birthday’ in Spanish, the girl is covered in silly string by family members.

The string bursts into flames and engulfs her after coming into contact with the candles on the cake.

The girl engulfed in flames when the birthday party, believed to be in Argentina, goes horribly wrong 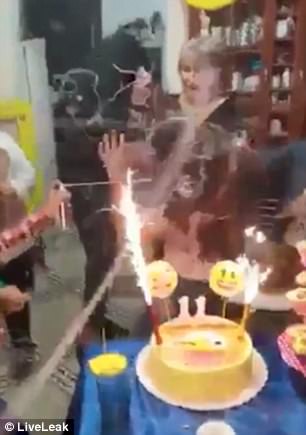 The girl was standing behind a cake decorated with a number of emojis, the number 11 in candles and two firework-type fountain candles.

Although most of the silly string stuck to the girl as planned, remnants of it came into contact with the cake and acted as as fuse.

The video quickly cuts out as family member rush towards the girl to pat the flames down as the younger children scream.

It is not clear whether or not the girl suffered injuries.