A mother has shared a harrowing picture of her little girl with a badly burned mouth as a warning to other parents who may let their children try acidic lollies.

The picture shows the little girl with tear-stained cheeks and a huge blister covering most of her tiny tongue.

The youngster had helped herself to some of her older brother’s sour lollies with horrific consequences.

‘She came to me screaming ”my tongue is sore” …she was beside herself,’ the little girl’s mum said.

Former Paramedic and child-safety educator Nikki Jurcutz, who is also a mother of two, share the pictures on Facebook on behalf of the family.

‘Sour lollies are acidic and can cause terrible burns to little ones,’ she said.

Nikki said sour lollies, such as Warheads, should be introduced ‘after five and with caution’.

And her warning was quickly picked up by the Tiny Hearts Education Facebook Page fans.

Many were shocked sour lollies could cause so much damage.

‘Oh gosh would have never even crossed my mind that could happen,’ one mum said, shocked.

Others said sour lollies should be taken off the shelves.

‘I don’t understand how sweets can cause this much damage. I have never had one and won’t be doing so now,’ one woman said.

‘They shouldn’t be on the market for children full stop,’ said another.

Over a thousand concerned parents commented on the post in disbelief.

‘I have already shared this with three people, shocked,’ one said. 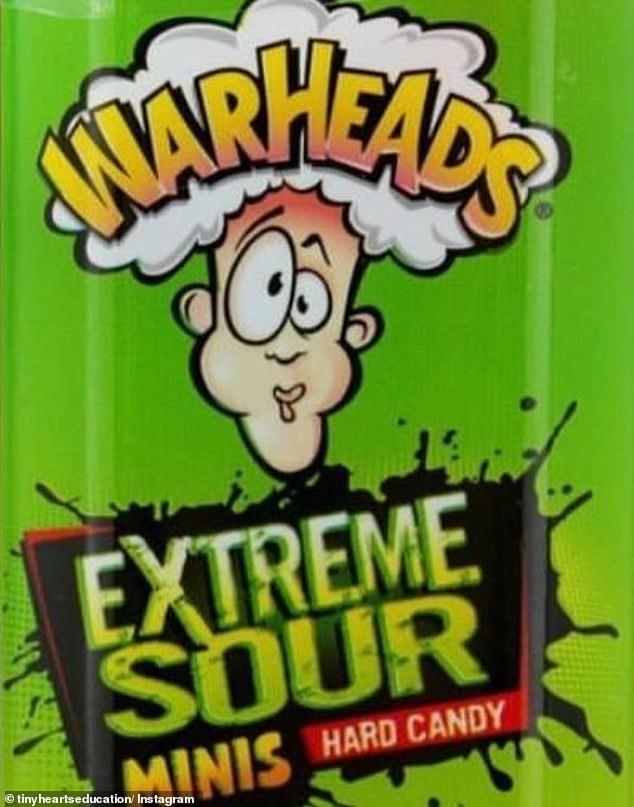 The mum-of-two said sour lollies, such as Warheads, should be introduced ‘after five and with caution’

But other mum revealed they had suffered similar discomfort as children.

‘Anything really sour or acidic can do it, I had it as a kid as well,’ one woman said.

‘I get it from pineapple and even salt and vinegar chips as well as most sour lollies,’ said another.

Nikki praised the brave mum for sharing the photos with her.

‘She is such a great mama, literally just wanting to warn others,’ she said.

The family think the youngster held the sour lollies against her tongue in the same spot.

‘We spoke to a doctor and got advice but I was so worried when I saw what they had done to her,’ she said.

Her mouth ‘healed in a few days’ but her mum knew other parents should be aware of the danger.

Tiny Hearts Education have over 160,000 followers on Instagram where they upload information on child safety, little-known hazards and general medical tips.