Evie Latewood (pictured with her mother Nathalie), who will turn two next month, has cancer cells in her new liver

A toddler who survived a liver transplant last year is facing fresh medical agony after doctors discovered the donated organ had caused a cancerous tumour.

Evie Latewood, who will turn two next month, has cancer cells in her new liver as well as her ribs, kidney and abdomen.

She had the transplant in February last year but doctors believe the tumour was passed on from the donor, who died of brain cancer.

The toddler from Portadown, Northern Ireland, has had chemotherapy but her future is uncertain because her condition is so unusual, The Sun reported.

Evie was born healthy but her parents, Nathalie and Dyllan, noticed after five days that her stools were the wrong colour.

She had a procedure to connect her liver to her intestine as medics believed her bile ducts and gall bladder had not formed properly.

The operation was a success but Evie then started vomiting blood and was flown to Birmingham by air ambulance.

The parents were told she would need a transplant, and a liver became available within less than 24 hours.

She survived the six-hour operation only for her mother to find a lump on her ribs last November.

Describing her reaction, Mrs Latewood said: ‘It hit really hard. You are completely devastated. You go on auto­pilot. 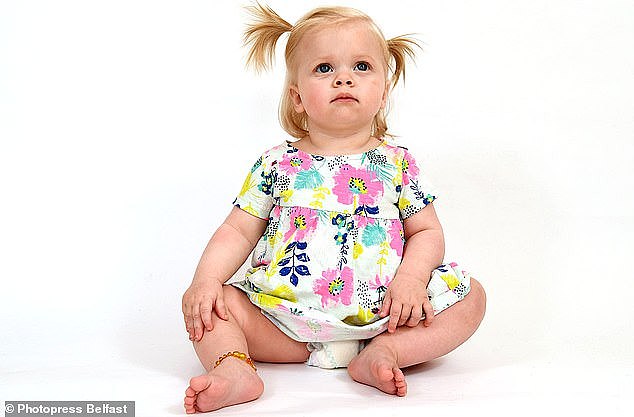 The toddler (pictured) from Portadown, Northern Ireland, has had chemotherapy but her future is uncertain because her condition is so unusual

‘If she hadn’t had that transplant she would not be alive today and after it she had an amazing eight months.

‘She is such a happy wee thing. To see what she has overcome is amazing.’

The toddler reportedly has glioblastoma, the same disease which killed the donor, a woman in her 30s.

Earlier this year Mrs Latewood said she had written to the dead woman’s family to express gratitude for helping Evie.

‘We are so grateful not only to her, but to her family for their precious gift,’ she said at the time.

‘We’ve written to them and sent them photographs so hopefully Evie’s story gives them some comfort.