The thing that has been special about Jurgen Klopp’s Liverpool is their desire to keep breaking records but no satisfaction was forthcoming from their latest.

When Dries Mertens galloped through unopposed in the 22nd minute – with all the time in the world to watch a dipping ball from Giovanni Di Lorenzo drop in front of him – and swatted volley past Alisson Becker, this became the eleventh consecutive game that Liverpool had conceded.

If you think eleven sounds a lot, you would be right. To give this context, Liverpool are now on their worst run for keeping clean sheets since the spring of 1998 when Brad Friedel was their goalkeeper and Rob Jones, Dominic Matteo, Phil Babb and Stig Inge Bjornebye made up their defence.

When Dries Mertens galloped through unopposed in the 22nd minute and swatted volley past Alisson Becker, this became the eleventh consecutive game that Liverpool had conceded

Roy Evans’s team had talent but they were erratic and they went 12 matches, from February 7 to May 2, without stopping their opponents scoring. Such a record for that team doesn’t surprise. The porous figures for the class of 2019, by contrast, cannot help fail to raise an eyebrow.

The cornerstone of Liverpool’s progress under Klopp, particularly last season en route to the their sixth European crown, was the ability to place a hand on an opponent’s head and reduce them to taking air shots.

In those knife edge fixtures against Bayern Munich (in the last 16) then the second leg of the semi-final against Barcelona, Liverpool were faultless. Whenever there was pressure, whenever Alisson Becker’s goal was in peril, a leg or a head or a perfectly timed offside call would save the day. 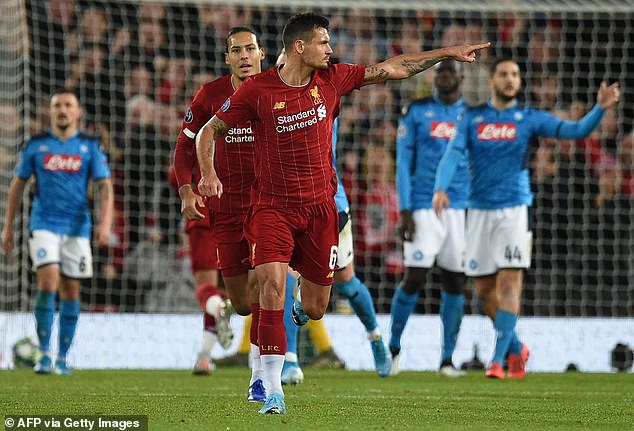 For some reason, Liverpool have not given the same feeling this season. It may seem churlish to knit-pick about a team that has only dropped two points in the Premier League but if you think such a number will not bother Klopp, you do not appreciate the German’s desire to obtain perfection.

His message, always, to his players before they play is the importance of keeping things solid at the back. To give you an example, when Liverpool faced Huddersfield at the end of last season, he erupted at his defenders towards the end of a 5-0 win because they conceded a chance.

So far, in 22 games, Liverpool have only had zeroes against Burnley, MK Dons and Sheffield United. To put another slant on that, Liverpool have played nine matches at Anfield to this point – and every visiting team, starting with Teemu Pukki for Norwich on August 9, has hit the target. 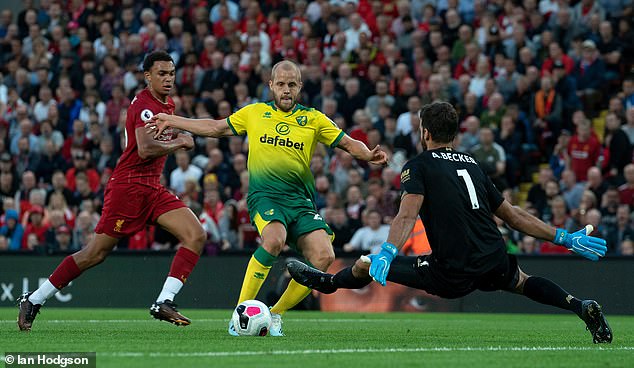 every visiting team at Anfield, starting with Teemu Pukki for Norwich in August, has scored

It can’t continue. Yes, Liverpool are breathtaking when they attack and there was a 20-minute spell in the second half against Napoli when the intensity rose and the crowd began to roar that you saw why this stadium is foreboding on these kind of nights.

To focus purely on that, though, would be blinkered. The first half was horrible and the manner in which Mertens charged unopposed into the 18-yard area, as Virgil van Dijk lay prone and his team-mates stood passively, had Klopp clasping his hands to his head.

Nobody is questioning Liverpool’s talent or the fact that they have been the best team in Europe for the past 12 months. Just recently, however, one of the foundations – that miserly defence – has not been operating as the manager would want.

It’s an old rule of thumb but the sides that win the biggest prizes tend to be the best defenders. Liverpool need to get back to break records for the right reasons.