A young Iraqi family who fled their home country after being the targets of a car bomb have been told they’re being deported back.

The Al-Aloosi family escaped the war-torn country in 2006 after being targeted by the ruling militia.

They received death threats and were handed arrest warrants, and their family car was blown up in a failed assassination attempt.

Now the Home Office has rejected their claim for asylum and has notified them that in March they will be detained and deported back to the warzone, where the family say they will be killed instantly.

For 18-year-old daughter Yam, who has spent many of her formative teenager years in Liverpool, the prospect of leaving her friends and life here to go back to a terrifying war zone is unbearable.

She said: ‘One of the memories I can remember vividly was when we were driving to a birthday party, so it was quite a happy occasion and I was dressed up nicely.

‘And then suddenly the car was caught between two groups fighting and the car was getting shot at – I remember my mum pushed my head under the seat and I didn’t know what was happening, that is just one of the things I remember.’

The bright teenager has recently been treated for post-traumatic stress disorder because of her experiences in Iraq.

She said she feels like a Scouser now, adding: ‘I really like Liverpool, the people are really nice and all the friends I have made have been really helpful.

‘I have made my own family here and it would be really horrible to just leave them. 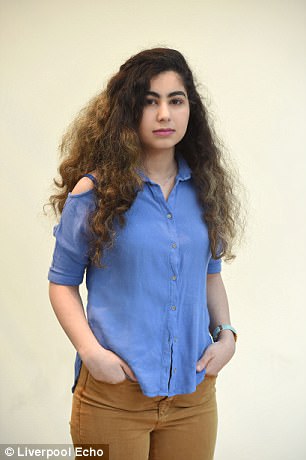 ‘The idea of going back makes me feel awful. If the situation was getting better then maybe, but its not – every day we hear something has happened, like another suicide bomb just the other day.

‘We also heard about a shopping mall being blown up recently – as a teenager I would want to be out and going to places but I just won’t be able to.’

Electrical engineer Yasir said his family were a target of the Shia militia in Iraq because they belong to the different Sunni denomination of Islam.

He said: ‘After 2003, it was all chaos – in 2006 I got threatened and the militia bombed my car. This came after lots of death threats.

‘They did this for sectarian reasons, we come from Muslim background, we are sunny Muslim and the militia belong to Shia – they only want their own people, they don’t want anyone else.’

They initially fled to Jordan before Yasir was granted a work visa in the United Arab Emirates.

When Yam was completing a study exchange programme in 2013 in Bath, Somerset, her family came to visit her but were unable to return to UAE because her father’s work contract was cancelled.

The family were placed in Kensington, Liverpool, where they have lived for the past five years while their asylum claim was processed.

Under UK law the Al-Aloosi parents have not been allowed to work, so they’ve enrolled in college courses to keep busy.

Jean was awarded a place at Cambridge University to study Maths, but was unable to take it up when the claim was rejected – the same happened to Yam with an engineering course at Sheffield.

If there had been any doubt that the militia in Iraq had forgotten about the family, it was dispelled when a threatening note was put on the front door of Yasir’s elderly parent’s house in Baghdad two years ago – which stated that if they did not give him up, they would be taken and killed instead.

The terrified couple – both in their eighties – have now also fled to nearby Jordan.

But it appears that none of these factors have been able to convince the Home Office that the Al-Aloosi family should not be forced to return to their war-ridden home.

Yam said: ‘They are saying they would put us in a detention centre and then deport us – my little sister cried for an entire night when she heard about that.’

A spokesman for the Home Office said: ‘Where someone is found not to need our protection we expect them to leave the country voluntarily. Where they do not, we will seek to enforce their removal.’

The family and their friends in Liverpool have now launched a petition calling on the Home Office to reverse its decision to send them back to Iraq.