Lunchtime at Liverpool’s swish hotel and an audience with Jurgen Klopp beckons. Shortly before he enters the room, however, a club official indicates that the Champions League might not be a fruitful topic of conversation.

The guidance is that he does not want to dwell on the past. Beating Tottenham provided a glorious end to a remarkable season but he has made it clear since the return to training two weeks ago that the events in Madrid belong to history.

Yet when Klopp enters the room, drinking coffee from a mug emblazoned with the message ‘This belongs to Jurgen’, it seems contrary not to open the conversation with the most important 2-0 win of his four-year Anfield reign. It proves to be a sensible decision.

If the sterile game was forgettable, the events of the subsequent 24 hours — which culminated with a bus tour around the city in the presence of one million supporters then a private party at his house — are not. In a flash, Klopp is smiling and ready to tell some stories.

‘It’s no problem to speak about it,’ he says, before pausing to gather his thoughts. ‘It was…absolutely overwhelming. It was too much to comprehend, one of the best things I’ve witnessed in my life.

‘Everyone tells you it will be something special if you win something with Liverpool and this was proper proof. I was thinking, ‘Wow! That was brilliant!’ then the bus came around the corner and you are like, ‘What the heck is that!?’ I could not imagine the noise.

‘We made so much eye contact with so many people — people in their late 60s or early 70s. There was one guy and he was like this: Boom! Boom! (Klopp punches his chest) and he is shouting, ‘I love you!’ 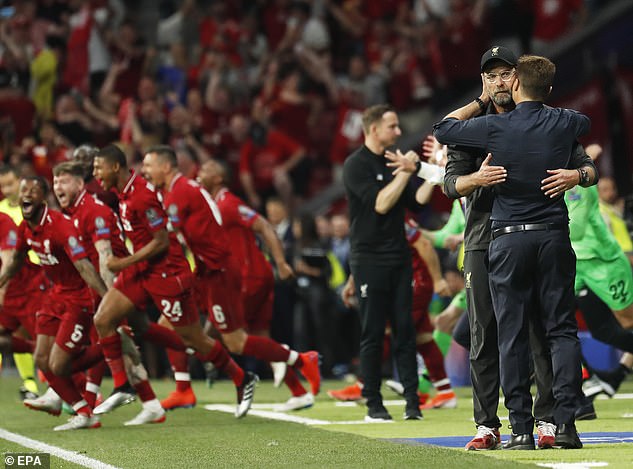 Klopp, who is now roaring with laughter, continues: ‘I was like, ‘Stop! Calm down!’ My God! That is only one example of thousands.

There are so many stories, he could write a book. Klopp makes a point of explaining that, contrary to popular opinion, he was not well lubricated on the journey around the city.

The beers he was supposed to have, he says mischievously, somehow found their way to goalkeeper Alisson Becker.

The telling grin that accompanies the revelation he hosted a select gathering at his house later that night suggest sobriety did not last the full day and it is safe to assume he toasted his players at regular points during his summer break. 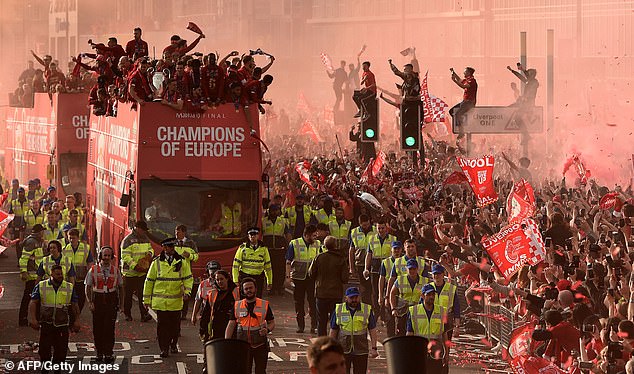 He goes on to talk about why it mattered so much. The triumph corrected the misery of losing the previous year’s final to Real Madrid and provided a riposte to those critics who believed Klopp was destined to be a nearly man at Anfield.

He said: ‘Last year, my agent called me when I was on holiday and said, ‘How are you?’ and I said, ‘Fine. I am over it. I could not feel better if the cup was next to me.’ Now I know that was a lie.’

It is here the conversation moves naturally to looking at the future. The club want Klopp to stay for ‘as long as he wants’ but his own contractual situation, he stresses, is not important.

He has three years left and has promised he will still be at the helm in June 2022. 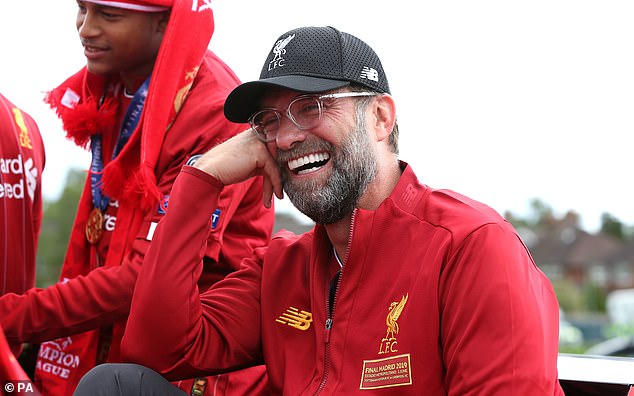 What is important, however, is progress. The sea of Red that welcomed Liverpool back has provided memories that will last a lifetime but those images have stirred something else within him: greed. Conquering Europe is not the summit of his ambitions.

The spin-offs of beating Tottenham will see Liverpool contest the European Super Cup final, against Chelsea, and the Club World Cup in December. 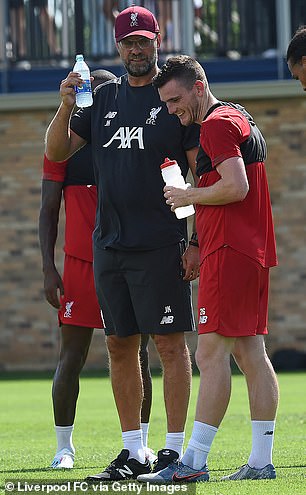 Klopp shares a laugh with Andy Robertson (right) as they trained at the Notre Dame Stadium in South Bend, Indiana

They are important trophies that Klopp wants to win. Then, of course, there is the domestic squabble with Manchester City that is destined to run and run.

‘Nobody should be worried about us being complacent,’ said Klopp, whose side faced Borussia Dortmund in the early hours at Notre Dame University in Indiana.

‘There are so many reasons for staying greedy. We tried so many things to win and finally it worked out.

‘The Champions League is the biggest cup that I see in football apart from the World Cup. Absolutely massive. But you now want to have it all the time.

Nobody should be worried. Nobody is satisfied and we are not ready to go home. We have won something and got it in our trophy cupboard but our attitude does not change.

‘I couldn’t have imagined it when we sang the year before at the funeral party that, ‘We bring it back to Liverpool!’ and it would work out. We got there. So let’s try to get there again next season. We will not even think about stopping.’