Liverpool thanked UEFA, Roma and the Italian authorities after a productive meeting took place on Friday amid fears over their fans’ safety ahead of the Champions League semi-final second leg.

They requested an unprecedented discussion over security for supporters who will travel to Italy next week.

Liverpool had serious concerns about the conditions that will greet the 5,000 supporters for game in Rome’s Stadio Olimpico. Those without tickets have been advised not to travel.

But in a statement on their website, Liverpool wrote: ‘Liverpool Football Club would like to thank UEFA, AS Roma and the Italian authorities for providing the most up-to-date detail on operational procedures ahead of the Champions League tie on Wednesday.

‘A positive and productive meeting has taken place in Rome today (Friday), with all those involved displaying intent for a collaborative approach and a commitment to making the event a great sporting occasion.

‘Important guidance for travelling Liverpool supporters was discussed at length and the process is already under way to refine that information so it can be shared with those attending at the earliest opportunity.

‘The club, UEFA, AS Roma and the Italian authorities will continue to work together to deliver further information and we thank supporters for their patience while we collate, review and disseminate this guidance.’

When the clubs were drawn together two weeks ago, Liverpool contacted the Italian authorities with a list of security issues but they grew increasingly frustrated by the lack of concrete information provided.

Fears over the safety of Liverpool fans heightened after the unprovoked attack on Sean Cox, the 53-year-old Irishman who has been left in a medically induced coma. Mr Cox remains in a critical condition in Walton Neurological Hospital and two men from Rome have been charged in relation to the incident.

Liverpool were keen to know what plans are in place to shuttle their fans safely and securely to the stadium, what time supporters can arrive there and when the turnstiles will be open. Liverpool are prepared to fund any extra costs.

Rome has been a hotspot for football-related violence.

Many clubs from Europe have stories of supporters being attacked by ‘ultras’ and Liverpool want to know which areas of the city should be avoided.

Despite several meetings, club officials were troubled by the lack of clarity.

For that reason, they took the initiative on Thursday, with a delegation heading to Rome to voice their fears.

One supporter was pictured carrying a hammer on his way to the attack at Anfield. There is no suggestion that this image is of either of the attackers of Mr Cox

Liverpool have history in Rome. There were knife attacks before a UEFA Cup last-16 match in February 2001 and again 10 months later when they were paired in the Champions League.

The worst violence was after the European Cup final in 1984 when Liverpool fans were ambushed.

Several more English clubs, including Manchester United, Tottenham, Chelsea and Middlesbrough, have also been targeted during trips to Rome in recent seasons. 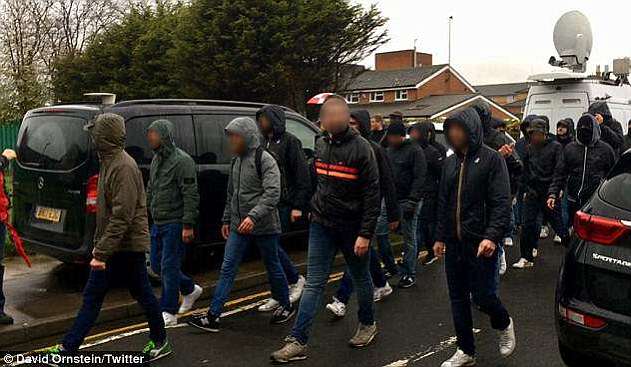