Liverpool fear Fabinho will miss their most demanding spell of the season due to the ankle injury he sustained in their Champions League draw with Napoli.

The Brazil midfielder, who has become one of Jurgen Klopp’s most trusted players, was substituted midway through the first half of Wednesday’s 1-1 draw with the Italians and Klopp’s reaction suggested immediately the damage he sustained was serious.

Fabinho did not undergo scans yesterday, as Liverpool wanted to let the injury settle down, but they are concerned that tests will show that he is going to be sidelined for a period of four to six weeks. 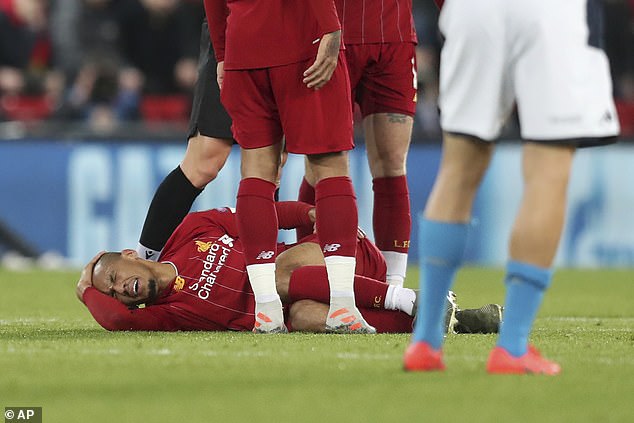 If that happens to be the case, Fabinho – who has established himself as Klopp’s first choice midfielder – could miss as many as 10 games, including the decisive Champions League fixture with Red Bull Salzburg plus the entire Club World Cup campaign in Qatar. It would be a huge blow to Klopp, Fabinho and the team.

How Liverpool cope with the demands on them in the next month will determine how successful the 2019/20 campaign will become but midfielder Gini Wijnaldum is adamant that Liverpool have the personnel to cope.

‘It is a blow, a big blow, for the whole team, of course also for him as a player but there are situations you have to deal with,’ said Wijnaldum. ‘I think during the years we have had a few blows, in terms of injuries, and we just have to show we can deal with the situation. 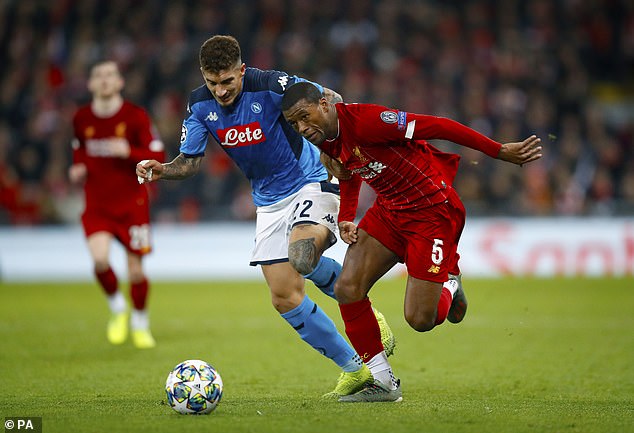 Liverpool team-mate Georginio Wijnaldum said the Brazilian would be a ‘big, big loss’ 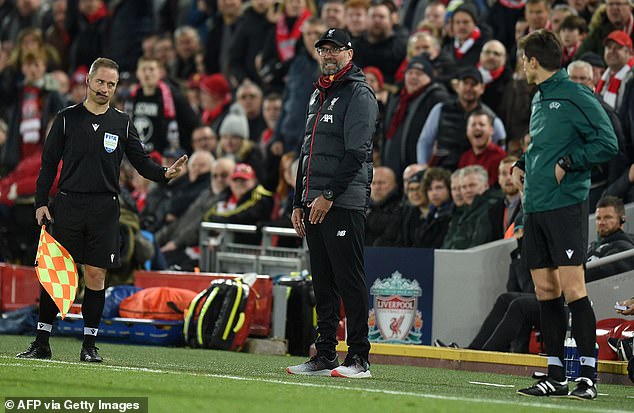 ‘We just have to show that it don’t affect us. During the years we had some difficult injuries and difficult positions, last season when we didn’t have a right defender, we just have to deal with it so we will see.’

Liverpool will play a game every three or four days, starting with tomorrow’s Premier League tussle with Brighton at Anfield, and critics view this schedule as the juncture that will define the league leader’s campaign but Sadio Mane has no concerns that a crammed fixture schedule will compromise the club’s ability to challenge for honours.

‘I think tiredness it is all in the head,’ said Mane. ‘The tiredness is in the head, so as long as the body recovers well I think it is not difficult for us to play every single game, if the team needs us, and the coach needs us, I think we will be able to play and help the team.

‘I always say to win games and win trophies, motivates players all the time. If we can win the World Club Cup then it will give us more momentum. Hopefully we are going to win it and give us another blast of high energy to go again for the rest of the season.’