Kayleigh Taylor, an X-Factor contestant who became an overnight sensation thanks to her stunning performance, once sent a barrage of racist messages to a former schoolmate

An X Factor hopeful has given a tearful apology over calling her former friend a ‘P***, but insists she is not a racist.

Kayleigh Taylor, 28, from Liverpool, wowed Simon Cowell and the judges last week with an emotional rendition of My Immortal by US rock band Evanescence.

In a full and frank interview, she said she is ‘disgusted’ by her behaviour and insisted ‘I am not a racist’ – despite still using phrases like ‘p*** shop’.

In the aftermath of the controversy, the singer – who impressed X Factor judges with her rendition of Evanescence’s My Immortal – publicly apologised after admitting she regrets sending the message, and claimed she is now a ‘changed person’.

Describing the response to yesterday’s story, she said: ‘It’s been disgusting. I’ve beeen branded a racist.

‘Apparently I have got no shame, I’m an unfit mum but it’s not true anyway.

‘There’s no denying it was racist at all. I’m not saying what I said was right, but I’m not a racist. I have got mixed race friends and friends from all different countries.

‘I understand people are going to be angry when they see it. But at the end of the day they were sent in 2010, I’ve changed a lot since then, if my children used language like that I’d be horrified.

‘If I heard someone say that to my daughter I’d kick off. It’s disgusting. It’s embarrassing. I’ve apologised but it’s not been accepted.’

She also revealed how she planned to return to the X Factor in 2018 if the racist messages hampered her progress in the ITV talent contest.

She said: ‘If it did de-rail [my chance] I’d just go back next year. That’s up to them isn’t it. I don’t think I’ve blown my chance, I’ve spoken to the producers every day and they’ve just said be honest.

‘They’ve told me not to retaliate but it’s hard not to come back when you’re being slagged off all over the internet. I’ve got more people there on my side so I will not be coming off Facebook. I’m not a nasty person.

‘People are going to have to make their own judgements.

‘In the past I’ve not considered other people’s feelings, I’ve just said it. Now I’ve realised what I’ve done, I’m ashamed. I’ve got friends who are mixed race and I think if they’ve read that, what do they think?’ 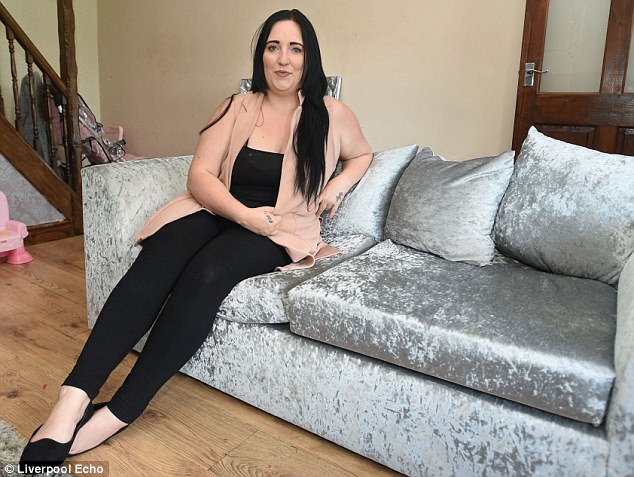 Kayleigh Taylor, 28, from Liverpool, wowed Simon Cowell and the judges last week with an emotional rendition of My Immortal by US rock band Evanescence

Despite the outrage over the messages, several of her fans have taken to Facebook to lend their support to the wannabe singer.

She added: ‘The reaction has been quite positive. I’ve had more positive than negative. A lot of people have been saying “yeah it’s bad but it was 10 years ago”.

‘Yeah I’ve said the [p] word since, but I’ve also had three children, I’ve grown up. If I heard my kids to say stuff like that I’d be disgusted. I am embarrassed at what I said.

‘It’s a few comments on Facebook. I’m not a racist, I’m far from it. People hear worse language off six year olds in the street.

‘[If my children used that word] I’d send them to bed. I don’t use it as an everyday word, I’ve said it since and I wouldn’t like to hear my kids use it.’ 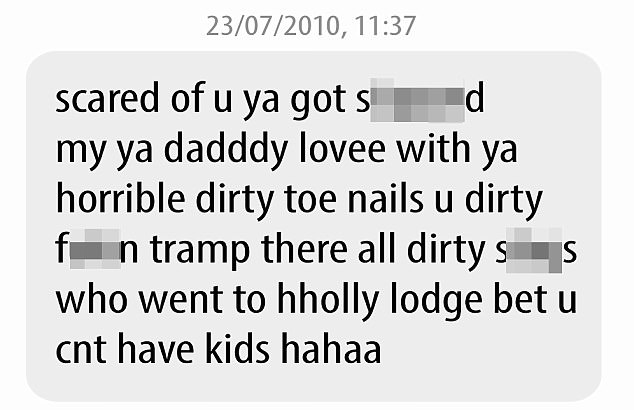 Ms Taylor said she was bullied throughout her childhood – which she says has contributed to her fiery attitude today.

She added: ‘I was bullied because I was adopted. My mum and dad are 75 now, they’re a lot older than other mum and dads.

‘I was adopted because my [biological] mum and dad couldn’t look after me and I’ve got an amazing mum and dad now who’d do anything for me. It turned me into the person I am.

‘When people were bullying me I’d retaliate. I got battered one day in school because this person had slagged me off that bad about being overweight and my mum and dad being old so I hit her in the school playground and she ripped my earring out and ripped my ear.’ 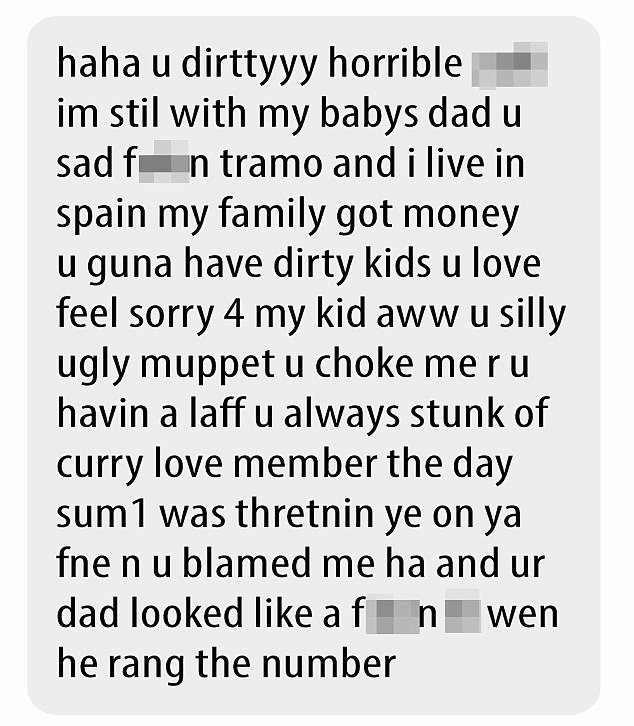 The apology is the third Ms Taylor has been forced to make recently – after already issuing a statement over the messages, and another over her appearance on the Jeremy Kyle Show.

Her X Factor audition saw her stun Simon, Nicole, Sharon and Louis with her

Simon Cowell tattoo after admitting she got it while bingeing on vodka in Magaluf.

She said: ‘I’ve got your name tattooed on my back, I did it after about 10 vodkas in Magaluf – they were only a euro you see.

‘I just thought it was a good idea at the time, so I just got it done and here it is.’

Her performance earned four yes votes from the judges – and a rebuke from Sharon after she quipped she was a ‘Vicky Pollard lookalike’.

Telling the story of how she met her fiance, she joked: ‘I’m engaged now, I’ve got a fella, I met him on a dating site, I put I was a size eight, but I missed off the one before it – got the shock of his life on our first date.’

Sharon replied: ‘Stop all the crap about the weight – it doesn’t matter. It’s who you are.’

‘This argument took place seven years ago. I have admitted I have made mistakes in the past – and a lot of them – and I am now trying to better my life and be a better person’.

A source told MailOnline that Ms Taylor left the show before the bootcamp stage.

Ms Taylor posted on social media about the controversy: ‘So apparently am in all the newspapers tomorrow cause I called someone a p*** in 2010’

Moments before she took to the stage, she joked about her weight, and even admitted that she looked like ‘Vicky Pollard’.

She added: ‘I had a job a couple of years ago in a fish-and-chip shop because obviously I like my food.’

Ms Taylor also admitted to having a soft spot for 57-year-old Cowell – by showing him a tattoo of his name on her lower back, the result of a drunken night out in Magaluf.

Judge Sharon Osbourne heaped praise on the singer, but told her it was time to stop apologising for her size. ‘Stop all the crap about the weight – it doesn’t matter,’ Ms Osbourne said. ‘It’s who you are.’

Fans immediately declared their love for the Scouser: ‘This Kayleigh on X Factor is my HERO… You’re killing meeee yes girl! I am so proud and idek the woman…

‘Kayleigh from Liverpool on X Factor is different class. What a voice and what a character. Superb.’ 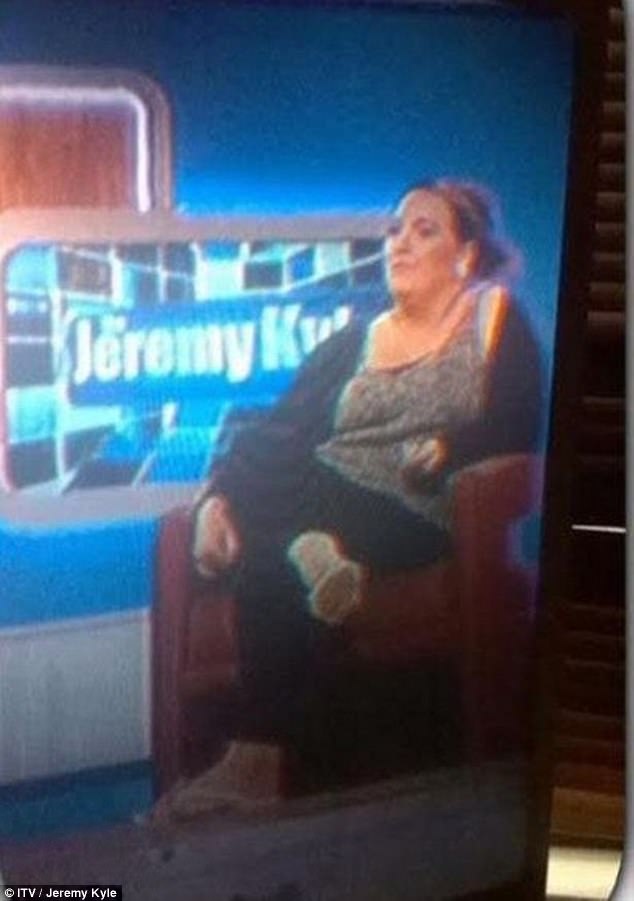 This is not Ms Taylor’s first time on television, however. She once appeared on the Jeremy Kyle Show when she was accused of stealing her father’s mobile phone

Ms Taylor’s audition even caught the attention of One Direction’s Louis Tomlinson, who labelled her a ‘legend’.

This is not Ms Taylor’s first time on television, however. She once appeared on the Jeremy Kyle Show when she was accused of stealing her father’s mobile phone.