Fabinho is set to be given a birthday treat on Wednesday night with a chance to show Liverpool fans what he can do.

The Brazilian midfielder, who was 25 on Tuesday, has struggled for game time since his £43.7million summer arrival from Monaco.

However, with Jordan Henderson and Naby Keita injured, Jurgen Klopp has suggested that Fabinho’s opportunity to shine will come under the Anfield lights.

‘It would make a nice present, yes?’ said the German. ‘I didn’t make the line-up yet but we will use him.’

Fabinho’s only start came in last month’s 2-1 EFL Cup defeat by Chelsea, and it has been an inauspicious beginning for a man from whom great things were expected.

Klopp, however, feels that the defensive midfielder simply needs time to adapt to Liverpool’s playing style, and if he ever does have any doubts. he just needs to go online.

‘You only have to watch a few YouTube videos of him!’ Klopp said. ‘He has the qualities — hard challenges, good offensively, defensively, quick, good shooter, fantastic set-pieces, good header, all these things. But it has been a different system and that always needs time, that’s all.’

There is plenty to learn, with Liverpool and Monaco chalk and cheese in terms of style, but Klopp is confident that quiet man Fabinho is a model student. 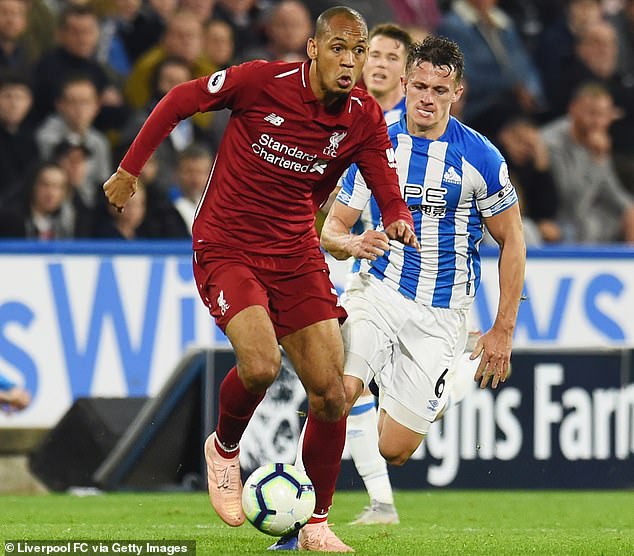 Brazilian midfielder has struggled for game time since £43.7m summer arrival from Monaco 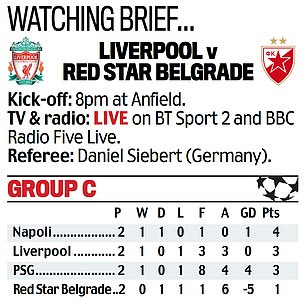 ‘He’s not the loudest person on the planet,’ he explained. ‘It’s not that he’s come in and said, ‘Sit down all of you and I’ll explain how we do it because we were in the Champions League semi-final the year before and became French champions’.

‘He is a rather reserved person, looking, watching absorbing, and it always takes a little bit more time.’

Liverpool will be looking for a reaction following a 1-0 defeat at Napoli last time out in this competition. Many would view Red Star — whose supporters have been banned from attending — as ideal opponents after they were thrashed 6-1 at Paris Saint-Germain.

Klopp is having none of that, and has called for an Anfield cauldron.

‘Atmosphere makes the difference — especially in games like this,’ he said. ‘It is not only against City or when we are 5-0 up against Roma at home.

‘It is really for these games, when everyone knows it will be difficult but the expectations are high and if you don’t win it then everyone will say everything is wrong.’

The message was serious, but Klopp was not without humour. When asked if he had experienced a match with no away fans before, the former Mainz defender joked: ‘When I was a player I played in empty stadiums — they were not banned they were not interested!’

Meanwhile, Trent Alexander-Arnold has admitted that Liverpool’s failure to reproduce the swashbuckling performances of last season has annoyed the players.

Despite being level on points with Premier League leaders Manchester City, there is a feeling that Klopp’s men are yet to click. 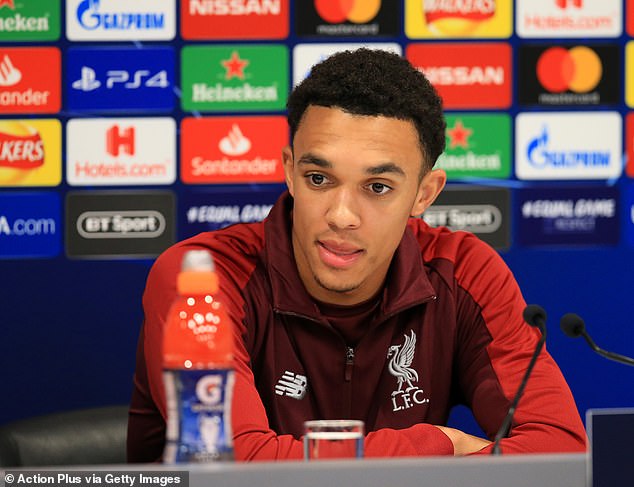 ‘Obviously it is frustrating,’ said England defender Alexander-Arnold. ‘We know we’re not hitting our full potential yet but it’s a long season so there’s a lot of time and room for improvement.’

Indeed, he sees the situation — getting results without being at their best — as a positive.

‘It’s something we’re really excited about,’ he said. ‘We can’t wait to hopefully hit our full potential, to reach our goals for this season.’