By Kieran Gill At The Luminus Arena, Genk For Mail Online

He’ll cover left back, right back, any position in midfield. Hell, Jurgen Klopp could ask James Milner to put in a shift at his local and he’d do it, no questions asked.

With Trent Alexander-Arnold sidelined by a virus, the majority expected Joe Gomez would get the nod for the champions of Europe. Instead, Klopp opted for the puzzle piece that always fits.

Gomez may consider that a snub — he has started just twice since August — but Liverpool’s Mr Versatile slotted in nicely. Milner, as he so often does, did the job asked of him.

With Trent Alexander-Arnold out with a virus, many expected Joe Gomez would get the nod

He started at right back. Then when Gomez was brought on midway through the second half, replacing Andy Robertson, Milner moved to left back. He is the man for all occasions.

The 33-year-old England international — a free signing from Manchester City in 2015 and whose contract expires at the end of this season — is considered a model athlete inside football circles.

Those who know the teetotal midfielder describe him as having ‘muscles on top of muscles’, a ‘freak of nature’ fitness-wise, and he proved no slouch down the right wing here. 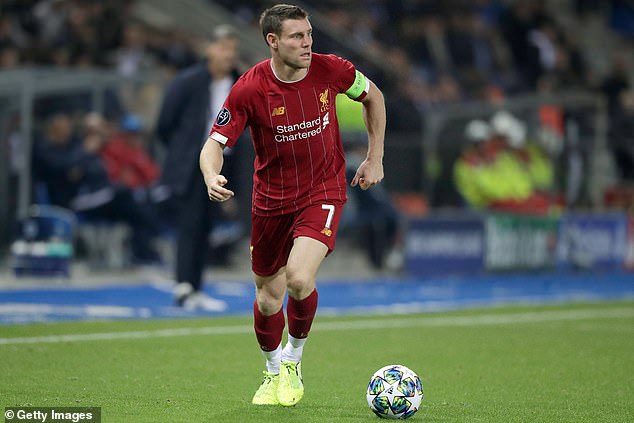 Klopp opted for the puzzle piece that always fits, James Milner – who captained the side

When replacing Alexander-Arnold, that is a must. The 21-year-old’s marauding runs are a huge part of Klopp’s set-up – just look at how Manchester United limited his input on Sunday and took a point off the Premier League leaders.

So to see Milner so high up the pitch, pushing on aggressive, will have pleased Klopp. Occasionally, he was even higher than Mohamed Salah, looking to add to an attack.

That is not to say there were not issues at the back for the visitors.

It will have concerned Klopp how easily his side were cut open by Genk’s long balls. Inside five minutes, Ally Mbwana Samatta was put through but dragged his shot wide. 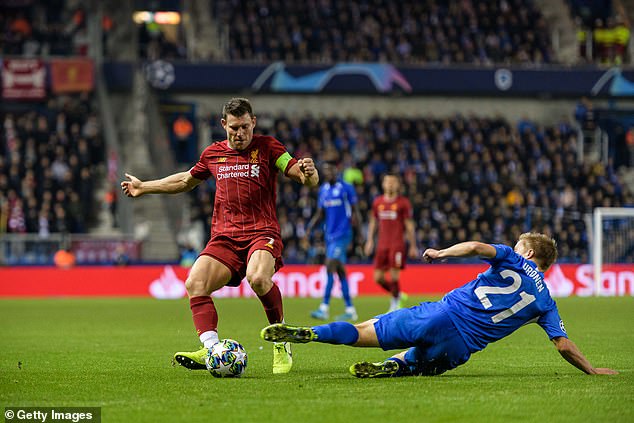 Moments later, a straight ball over the top caught Liverpool out again, with Dejan Lovren spending more time calling for offside than trying to stop the attack. Paul Onuachu forced Alisson into a save, though replays showed a sliding intervention from Milner was crucial behind.

The Belgian champions certainly caused problems, though perhaps that is to be expected when two vitals members of your defence — Alexander-Arnold and Joel Matip — are left at home.