LIZ JONES’S DIARY: In which I get another rejection

By Liz Jones Diary for The Mail on Sunday

Not my best week. Seriously. What’s going on? I was really nervous on Monday. I just had a bad feeling in my gut. I had the same butterflies when I was hand-grazing my rescue racehorse Lizzie for the last time, when I had to fly to Canada for work. She had to be put down while I was away. I remember learning the flying trapeze with Cirque du Soleil, water flowing out of my eyes and running down my face. They thought I was afraid of heights. Nic thinks I’m intuitive. One plus point, I suppose. I have one skill.

I’d been full of hope only last week. I’d had the dark sun damage on my skin lasered. I’d been to the dentist. I’d had a patch test at the Urban Retreat. I felt ‘on the cusp’. This is going to be my year. Yay!

And then, on Monday afternoon, I received an email telling me I hadn’t got the TV series I’d gone up for. I could hardly believe it. I was perfect for it! I was so upset and angry and thwarted, I emailed the literary agent I’d sent my novel to, way back last autumn. I had yet to hear his verdict, so I told him that, as a writer, it’s good to get feedback: a ‘thank you for your manuscript, safely received’, possibly followed a few weeks later by, ‘Hmm, I think it needs more this or that,’ or even a, ‘No. Go away. I hear Lidl is recruiting.’ Anything is better than a deafening silence.

In response to my chasing email, I received this, by return: ‘Apologies. I didn’t think I was your agent; I thought I was just helping out and you were sending me ideas sort of FYI.’

Who sends, with great fear and trepidation, a novel to an agent as an FYI? Does he realise how many hours a day it actually takes to write a novel? What’s wrong with all these dysfunctional men? How do they get to be in positions of power over us?

I forwarded his email to Nic. ‘Seems to me he doesn’t like being told off.’ Yup. Hit the rusty old nail on the head. But I’m starting to think I’ve been blacklisted. And then, to cap it all, I got an email from David. Oh dear God, what now? More doooom?!

‘Hi. Sorry to read of your visit to an ear, nose and throat surgeon. I hope it is nothing serious and you are well. X’

So, he’s still stalking me by reading this magazine. I replied, ‘No, I’m fine. I’m getting a hearing aid. The surgeon said he has no idea how I have been able to function. Should improve my life beyond measure.’

He replied: ‘That’s brilliant news. Although it will be a shame that no one will have to shout something dirty to you ever again. X’

You see. He’s making it sexual. His email is loaded with innuendo. His email, and his concern, is all about him. Ping! Another, saying he misses my dogs. ‘You’ve got your cat,’ I told him. I’m too busy for a boyfriend. Sex is just one more item on my to-do list. I doubt I will ever do it again.

But talking of dogs, my big news is that, just over a year since losing Sam, I have another border collie. Her name is Missy. She was found abandoned on a farm in Ireland as a puppy, and has lived for the past three years in an outside kennel just off the M25. I saw her on the Wild at Heart Foundation website. While some women do Tinder, I do animal rescue sites. I swiped and went to fetch her, sight unseen.

She’s even more mini than Mini, with anxious, bulbous eyes. I’ve had her a few weeks now and she has yet to bark or wag her tail; occasionally, when faced with Lily’s Kitchen dog food, her tail goes up and down, like a pump. She keeps staring at Mini, who is very jealous, willing her to love her. She’s as good as gold – most rescues are quiet, very licky and eager to please at first to avoid being rehomed; a bit like a man on those first few dates – apart from at 6am, when she starts cantering round my bed, her little black and white pointy face appearing momentarily, for all the world as though she’s on a trampoline. David never did that. 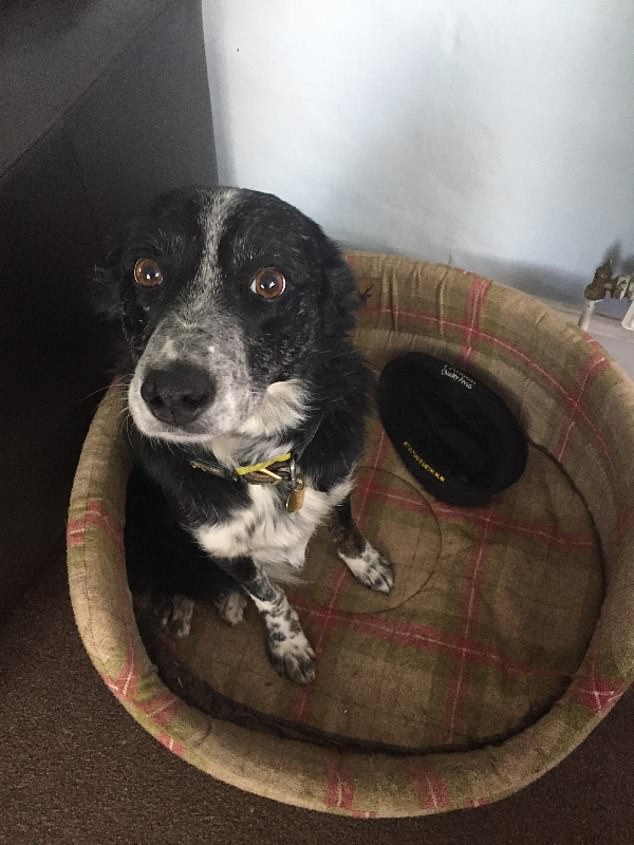 ‘Missy was found abandoned on a farm in Ireland as a puppy. I saw her on the Wild at Heart Foundation website. While some women do Tinder, I do animal rescue sites. I swiped and went to fetch her, sight unseen’