Lloyds Banking Group has shortened the terms of some of its zero per cent balance transfer deals in a sign that banks are responding to a Bank of England crackdown.

The equivalent card today has been pegged back to 38 months.

One of the bank’s other branded cards is also offering a less generous interest-free period.

MBNA is offering a 39 month deal, but before Lloyds had completed its purchase of MBNA earlier this year the card operator’s offer had been 41 months.

Interest free balance transfer cards have been under regulatory scrutiny recently with the Bank of England saying it is concerned at the lengthening in interest-free periods. The average period offered has doubled since 2013.

Lloyds has a 26 per cent market share of the credit card market and is second only to Barclaycard. 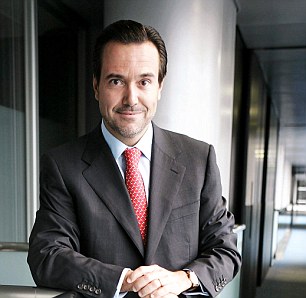 Lloyds chief executive Antonio Horta-Osorio said last month that surging consumer credit was not the fault of the big banks.

‘If you look at the Bank of England numbers in terms of consumer debt and you compare them to the BBA [trade association] numbers which have the major banks, you see that the growth in consumer finance according to the Bank of England is much stronger than the BBA numbers,’ he said.

‘I think most of the growth in consumer finance is being done in sub-prime or near-prime segments which we don’t participate in.’

A bank spokesman said: ‘We believe we remain competitive.’