Five million Greater Sydney residents will be locked down for an extra seven days as the Covid Delta variant continues to spread around the city with 27 new cases on Wednesday, New South Wales Premier Gladys Berejiklian has announced.

There will be no relaxation of restrictions as planned on Friday, with shops and restaurants kept shut and schools closed except for children of essential workers until Friday July 16.

The extension also applies to the Central Coast, Blue Mountains, Shellharbour and Wollongong.

Ms Berejiklian said the decision was ‘difficult’ but was taken to stop the state ‘living in and out of lockdown’ while vaccination rates remain low.

Only 13 of the state’s 27 new cases were already in isolation, meaning 14 had been infectious in the community.

‘They are the numbers we are looking at when it comes to determining the length of the lockdown,’ Ms Berejiklian said.

‘That is why the New South Wales government, based on the health advice, which is our key indicator, made the difficult decision to announce the extension of the lockdown.’

Some Sydney residents vented their anger on Wednesday morning after news of the extension was leaked to the media.

Broadcaster Ben Fordham, who hosts one of Sydney’s most popular breakfast radio shows, fielded dozens of calls from exasperated parents and businesses owners. 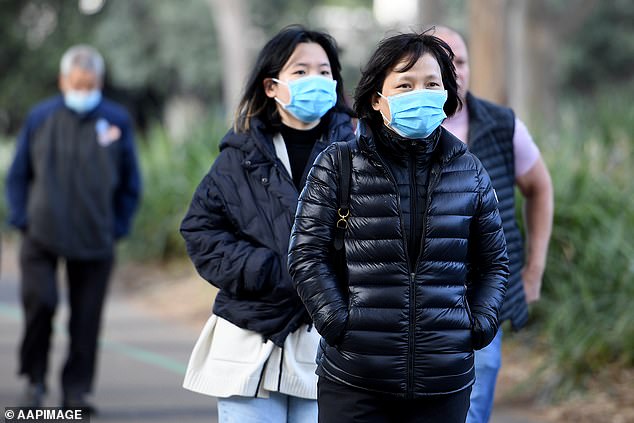 ‘We have had 18 months to prepare ourselves… this must be our final lockdown.’

One called named Michael said: ‘This is just getting ridiculous now. About 1,500 people a year die of the flu. Did we shut the bloody city down?’

But a poll of 1,000 Daily Mail Australia readers found 58 per cent were in favour of extending the lockdown to snuff out the deadly disease which can leave victims suffering for weeks.

One in 20 people who caught Covid in NSW’s first wave still had symptoms three months later such as fatigue, shortness of breath, a cough, joint pain and chest pain.

While nations around the world are opening up after successful vaccination rollouts, only nine per cent of Aussie adults are doubled jabbed, meaning lockdowns are still required. 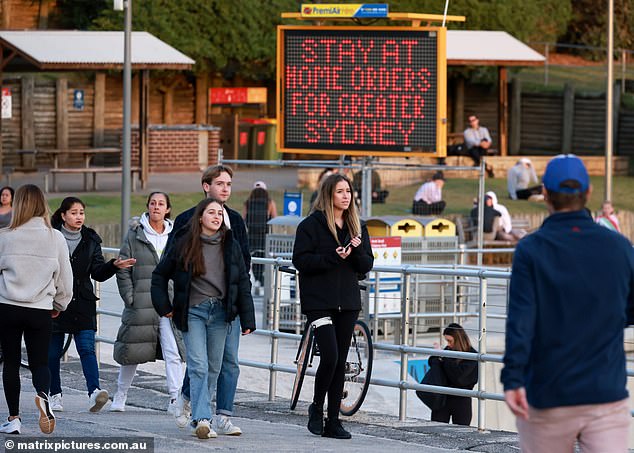 Sydney and surrounding areas will remain in lockdown for at least another week as the city’s rampant Covid-19 outbreak continues to spread throughout the western suburbs. Pictured: Sydneysiders stroll around Bondi Beach during lockdown on Tuesday 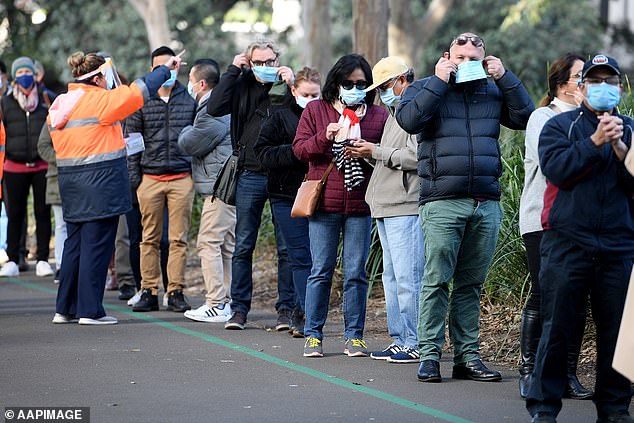 While nations around the world are opening up after successful vaccination rollouts, only nine per cent of Aussie adults are doubled jabbed. Pictured: Sydney vaccine queues

Fordham reminded Premier Gladys Berejiklian that she has repeatedly said the nation needs to ‘learn to live with the virus.’

‘You said New South Wales should remain open to give business confidence so what’s changed,’ he said on his show.

The premier on Tuesday said the highly infectious Delta strain, which spawned in India, posed a greater threat to public health than previous strains.

With community transmission confirmed in Sydney’s west late on Tuesday night, including in a busy Coles in Parramatta, the NSW government made the call to extend restrictions until 11.59pm on July 16.

Crisis meetings were held throughout Tuesday, with the government reportedly having considered three different options – a three, five or seven day extension.

In an unusual late-night drop of new Covid-19 exposure sites which added to fears about the outbreak, health chiefs revealed people had infected others at four venues across the city.

Of most concern to contact tracers is an infected Commonwealth Bank staff member who unwittingly spread the virus after working three shifts from June 28 to 30 at a branch in Roselands in Sydney’s southwest, forcing staff and customers into isolation. 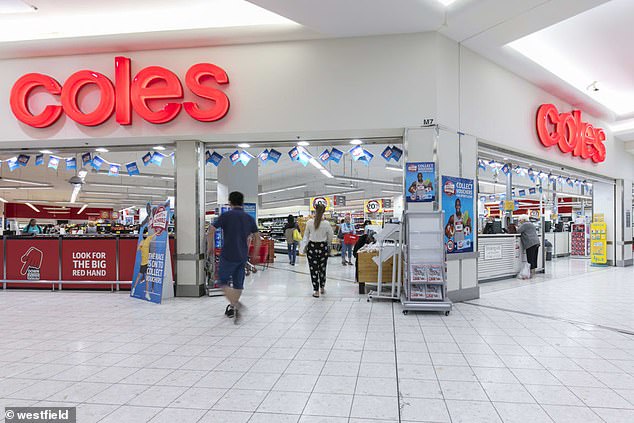 The situation is also worsening in Sydney’s west, with customers of the Coles at Westfield Parramatta (pictured) and Country Growers grocery store told to isolate for 14 days regardless of whether they get a negative Covid test result 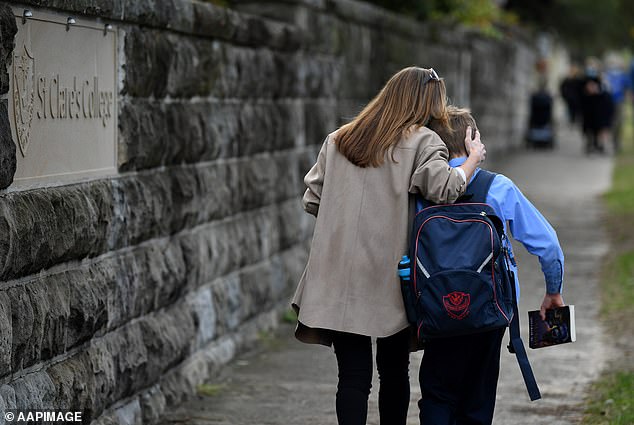 As part of the extended lockdown, schools will be shut with at-home-learning taking the place of face-to-face classes (pictured, parents collect children at St Charle’s Primary School at Waverley in Sydney, June 22, after a child became infected with Covid-19)

WHAT WE KNOW ABOUT LOCKDOWN EXTENSION

– Stay-at-home orders will be extended to July 16

– No child will be turned away from schools, meaning those in need can still attend

– There will be no regional easing of restrictions

– Schools will be open in regional NSW

– Infections have spread from Sydney’s east to the wester suburbs, worrying contact tracers

NSW Health revealed there had been ‘transmission of Covid-19 to customers’ at the bank, with the virus also being spread at two supermarkets in Paramatta, in Sydney’s west.

The exposure dates at the bank are Monday June 28, Tuesday, June 29 and Wednesday June 30, with customers told to get tested immediately and isolate for 14 days.

Customers who attended Coles at Westfield Parramatta and Country Growers grocery store have also been told to get tested immediately and self isolate for 14 days, regardless of the result.

The same goes for a construction site in Toongabbie, where an infected tradie worked for five days from June 28 to July 2 before testing positive.

All of the above four venues were visited by infected people, and were also the site of a spreading event.

Speaking about the possibility lockdown would be extended earlier on Tuesday, Ms Berejiklian said the infectiousness of the Indian Delta strain had dramatically altered the situation.

‘The difference now to what occurred in the last year or so – since we had the only one other lockdown [the national lockdown in March 2020] – is the Delta strain,’ Ms Berejiklian said.

‘This strain is different to what we have experienced. If you look at other jurisdictions around the world, we can see that you can’t afford to let this get away from you.’

Other exposed sites announced on Tuesday include Coles in Hurtsville, McDonald’s at Bonnyrigg and Woolworths in Hillsdale. 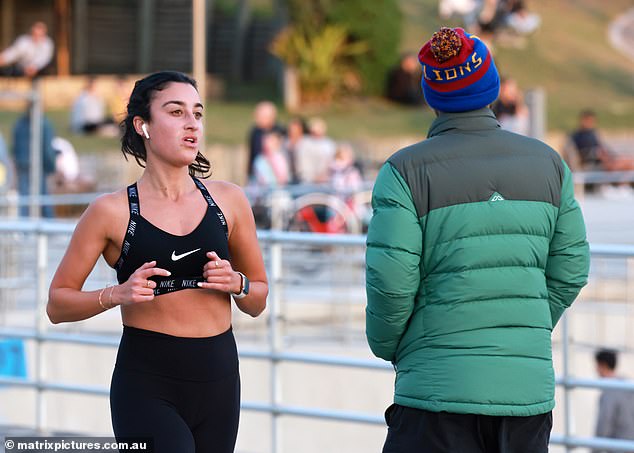 The lockdown was brought in on June 26 to confine the highly infectious Indian Delta strain to the epicentre in Sydney’s east (pictured, a woman goes for a jog during Sydney’s lockdown in Bondi on Tuesday)

Big W at Menai has also been exposed, as has Harris Farm in Bondi Beach.

Authorities have linked all but two of the 18 new infections – nine of which are household contacts – to known cases. The new infections were reported from 32,136 tests.

There are now six patients in a hospital intensive care unit suffering from Covid-19 across NSW, two of whom are breathing through a ventilator. 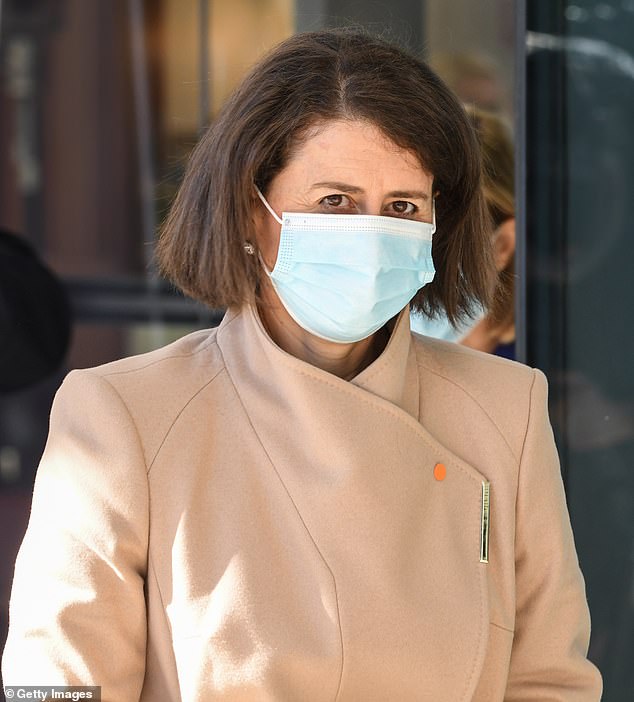 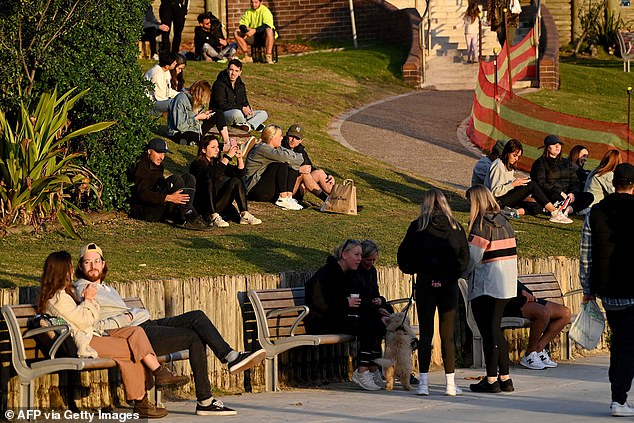 NSW Chief Health Officer Dr Kerry Chant said one of the cases was a worker at the SummitCare Baulkham Hills aged care facility in the city’s north-west who worked throughout their infectious period.

That worker had only received their first dose of the AstraZeneca vaccine, health officials said.

Business leaders are meeting with the treasurer at 10am on Wednesday to work out how companies can help with the vaccine rollout, with some organisations already offering flu jabs to their employees.

Vaccination is becoming mandatory for those working in aged care and anywhere within the hotel quarantine program.

There are now eight cases linked to the facility, including five residents and three aged care workers.

About 130 staff, and contracted cleaners, have been forced to quarantine for 14 days. 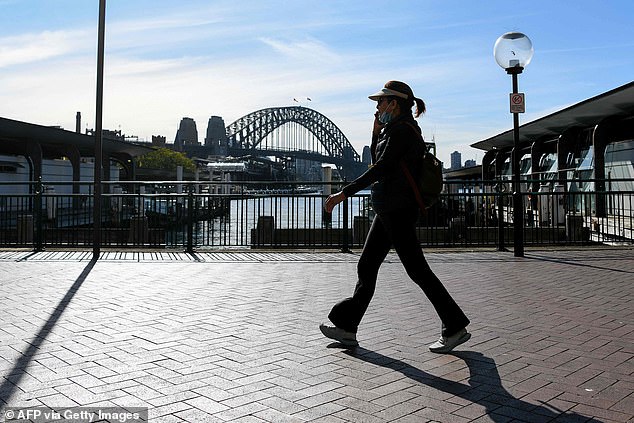 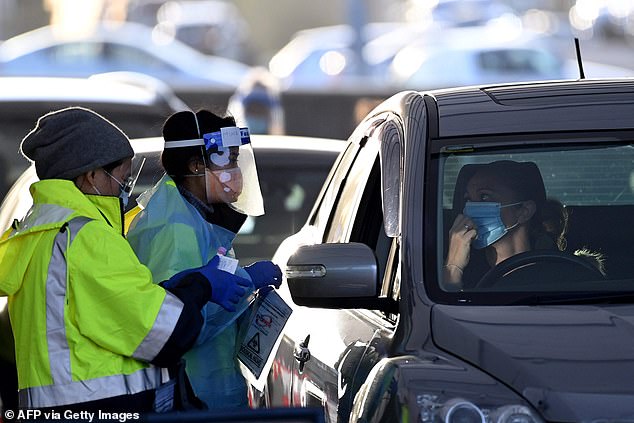 Another case has been linked to an illegal party held at the Meriton Suites at Waterloo in the inner-city on June 26. The cluster of cases linked to the gathering has now reached 12 infections.

Dr Chant on Wednesday also called for higher rates of testing in Fairfield and Bossley Park after a series of infections in the western Sydney suburbs.

She said a positive case visited the Bossley Park club Marconi on Prairie Vale Road on Friday June 25 from 2pm to 8.30pm and Saturday June 26 from 10am to 6pm.

It comes as an unvaccinated student nurse tested positive to coronavirus earlier this week, sending close to 400 healthcare workers in the state’s already stretched hospital system into isolation.

An extension to stay-at-home orders means hospitals and aged care facilities will still be blocked from accepting any visitors.

Anyone who visited the following venues – where an infected person has ALREADY spread the virus to others – are considered close contacts and should get tested and isolate for 14 days, regardless of result:

Anyone who visited the following venues are also considered close contacts and should get tested and isolate for 14 days, regardless of result:

Anyone who visited the following venues are also considered casual contacts and should get tested and isolate until they receive a negative result:

Anyone who attended the following venues at listed times should monitor for symptoms, and if they appear, immediately get tested and self-isolate until a negative result is received:

Anyone who travelled on the following train route during listed times is a casual contact who must immediately get tested and isolate until a negative result is received: