Lockdowns and state borders will be removed when 70 per cent of Australians over 12 are jabbed and outbound travel will be allowed when 80 per cent are double vaccinated, Scott Morrison has announced.

The Prime Minster announced the rates required for each step of his four-stage opening plan after a meeting with state premiers on Friday afternoon.

The percentages have been calculated by modelling experts at The Peter Doherty Institute for Infection and Immunity.

Mr Morrison also took into account economic modelling by Treasury on the impact of lockdowns as well as the country’s hospital capacity.

On Thursday a record 210,742 Covid jabs were administered across the country. So far 18.24 per cent of over 16s have been fully vaccinated and 39.46 per cent have had their first dose.

The Grattan Institute think tank released a report on Thursday saying 80 per cent needed to be fully vaccinated before opening up.

‘Abandoning our Zero Covid strategy before 80 per cent of Australians are vaccinated would risk a rapid surge in cases that overwhelms our hospitals and imposes a high death toll,’ the Race to 80 report says.

Allowing the virus to spread with half the population vaccinated would lead to 31,440 deaths within 300 days, it claims.

The Institute believes the country can hit the 80 per cent target by December 31 to avoid lockdowns next year. 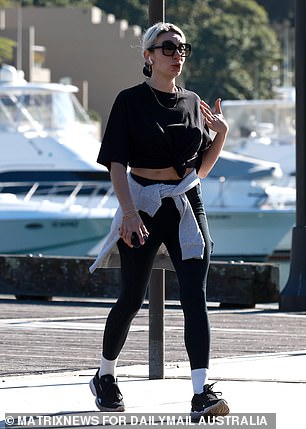 Sydney’s lockdown will last until August 28. Pictured: Wolloolooloo on Friday

States and territory governments may disagree on the percentage required and set their own targets.

Gladys Berejiklian earlier said she wanted to ‘bring forward’ NSW’s ‘fair share’ of the vaccines to help get Sydney out of lockdown.

The state government has suspended elective surgery in Sydney and called in 1,000 police and soldiers to enforce the lockdown as another 170 Covid-19 cases were recorded overnight.

The premier said while the number of new cases was ‘considerably less’ than Thursday she expected that figure could spike again on Saturday.

Of the newly-acquired cases, 42 were infectious in the community and 93 are still under investigation.

NSW Health said 87 were reported in south-west Sydney and 32 in both the western and central local health districts in the 24 hours to 8pm.

There are 187 patients suffering from Covid-19 across the state, of which 58 are intensive care and 24 are on ventilators.

From August 9, Ms Berejiklian said Qudos Bank Arena – a 21,000-capacity complex in the Olympic Park in the city’s west – would open to vaccinate students living in eight hotspot local government areas in Sydney’s west and south-west.

The state government hopes 20,000 Year 12 students a week will receive a Covid-19 jab every week at the vaccination hub.

Earlier Anthony Albanese slammed Mr Morrison for being ‘too slow’ to order vaccines last year and made four suggestions for speeding up the vaccine rollout.

He said Australian officials should be calling the Americans and asking for any supplies they can spare, build MRNA vaccine production facilities faster, have more pop-up vaccine clinics and a better advertising campaign.

In July 2020, the US ordered 200 million doses of Pfizer, the UK ordered 90 million and Canada ordered 20 million.

But Australia didn’t order any until November, when it requested just 10 million doses of the highly effective jab.

In April the government increased the order to 20 million and doubled it to 40 million in June – but critics say this quantity should have been ordered far earlier.

2. Post vaccination phase (when 70 per cent are jabbed, expected early next year)

3. Consolidation phase (when 80 per cent are jabbed)