Lockdowns may still be needed after 80% of Australians are vaccinated

Restrictions to control Covid-19 may still be needed after 80 per cent of the population is vaccinated – but they will be much less likely, Scott Morrison has said.

Modelling released on Tuesday showed that if an outbreak of the Delta strain lasted for six months then 1,984 Australians would die if 70 per cent of the population were vaccinated and 1,281 would died if 80 per cent were double-jabbed.

Doherty Institute modelling (pictured) released on Tuesday showed that if an outbreak of the Delta strain lasted for six months with only ‘baseline restrictions’ then 1,984 Australians would die if 70 per cent of the population were vaccinated and 1,281 would died if 80 per cent were fully-jabbed

‘I have no doubt that if such a scenario were to eventuate, then there are additional measures that would be taken to avert those types of outcomes,’ he said.

The modelling by the Doherty Institute said that a 70 per cent rate could be achieved by October 18 if AstraZeneca doses are given four weeks apart and 80 per cent could be vaccinated by November 8.

If doses are given 12 weeks apart then the latest date predicted to reach 80 per cent vaccine coverage is November 22. 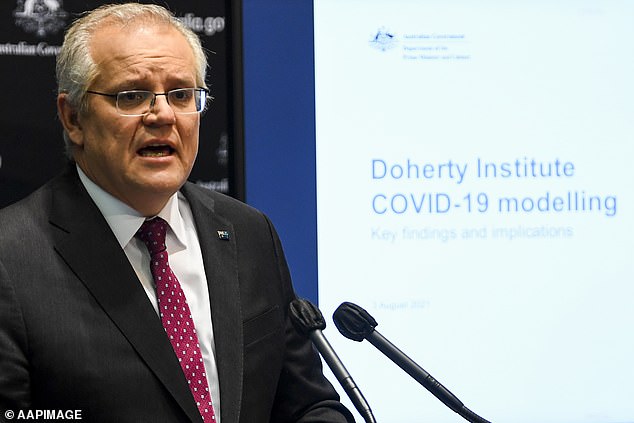 Restrictions to control Covid-19 may still be needed after 80 per cent of the population is vaccinated – but they will be much less likely, Scott Morrison (pictured) has warned 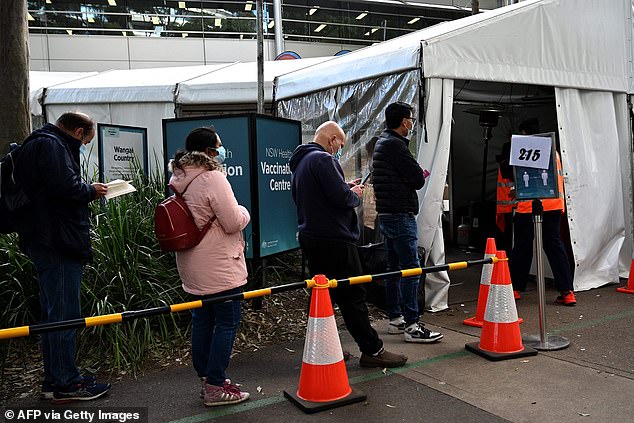 Mr Morrison said he hopes this phase will be achieved before the end of the year but warned the timing ‘is entirely up to how the nation responds to this challenge we’re setting for ourselves.’

This phase, known as phase B, will make lockdowns ‘less likely’ and will give doubled-vaccinated people ‘special rules’ to allow them more freedom than Aussies who refuse a jab.

A ‘small working group’ involving the Northern Territory, Victoria and Tasmania has been set up to determine which restrictions will not apply to the double-vaccinated.

The Prime Minister warned that some localised lockdowns may be required in phase B but ‘broad-based metropolitan-wide lockdowns’ shutdowns will not be needed. 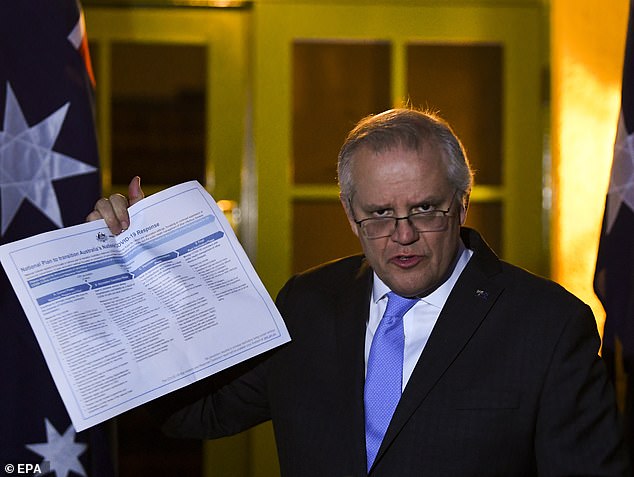 Lockdowns and state borders will be largely removed when 70 per cent of Australians over 16 are jabbed, Scott Morrison announced. He is pictured holding his four-stage plan

The phase will increase the cap for vaccinated Australians arriving from overseas and allow ‘reduced’ quarantine requirements such as home quarantine – as well as capped entry for students and economic visa holders.

Phase C begins when 80 per cent of adults are double-jabbed, allowing vaccinated Australians to travel overseas for any reason.

Travel bubbles will be set up with safer countries such as Singapore to allow vaccinated travellers to fly in without quarantine.

Mr Morrison said a country would be deemed safe if it has ‘the same sort of vaccination levels as Australia’. The UK has already fully vaccinated 71.4 per cent of adults.

There is no vaccination rate set for phase D, which will remove almost all rules except for testing of unvaccinated arrivals and quarantine for arrivals from ‘high risk’ places.

The Prime Minister warned the plan is based on the Delta variant and is ‘subject to change’ if a new, more contagious variant comes along.