Logan Paul, the controversial vlogger who sparked fury and disgust by including footage of a person hanging in a forest in one of his YouTube videos, has returned to social media with a video to call for suicide prevention.

Paul, 22, took to Twitter on Wednesday afternoon to direct fans to the new video where he pledged to donate $1million of his estimated $14million fortune to ‘various suicide prevention charities’ and become ‘involved’ in the conversation.

It is his first tweet, post, video or comment since January 3, when he signed off of all platforms after being widely condemned for his insensitive video.

Paul was filming in Japan’s ‘suicide forest’, a woodland known for its high suicide rates, when he and his crew came across a person hanging from a tree last year.

They uploaded the video to his account under the title We Found A Dead Body.

In it, Paul bellowed out: ‘Yo, are you alive? Are you f**king with us?’ as the victim, an unidentified male, hung in a noose.

Paul’s new video, which was dubbed as an attempt to salvage his image, was met with mixed reactions.

His young fans embraced it and rushed to congratulate him.

Others said they were skeptical of his new found sense of self and pointed out that while he may have posted the video on Twitter, he was still advertising links to his ‘Maverick’ merchandise in his bio instead of links to suicide prevention charities he now claims to support.

Logan Paul is shown in his newest video, Suicide: Be Here Tomorrow, interviewing a suicide survivor. It is his first since he tastelessly filmed a suicide victim in a forest in Japan earlier this year

In the new video, Paul says solemnly: ‘I know I’ve made mistakes. I know I’ve let people down.

As a society, as human beings, we just have to be more compassionate. That includes me

‘But what happens when you are given an opportunity to make a difference in the world?

‘It’s time to learn from the past and grow as a human being. I’m here to have a hard conversation so that those who are suffering can have easier ones.’

At the end, he proclaims: ‘It’s time to start a new chapter in my life as I continue to educate both myself and others on suicide.

‘I am humbled and thankful to say, this is just the beginning.’

He also declares: ‘As a society, as human beings, we just have to be more compassionate. That includes me.’

Throughout the seven-minute video, Paul is filmed being interviewed by charity founders and suicide prevention experts. 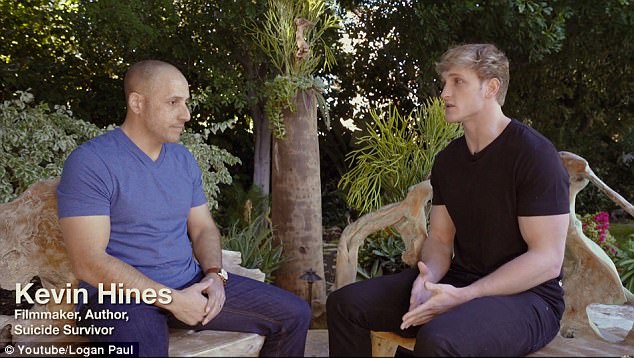 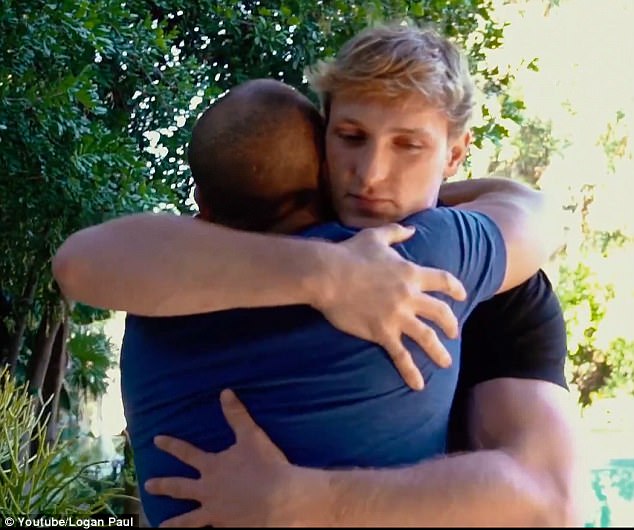 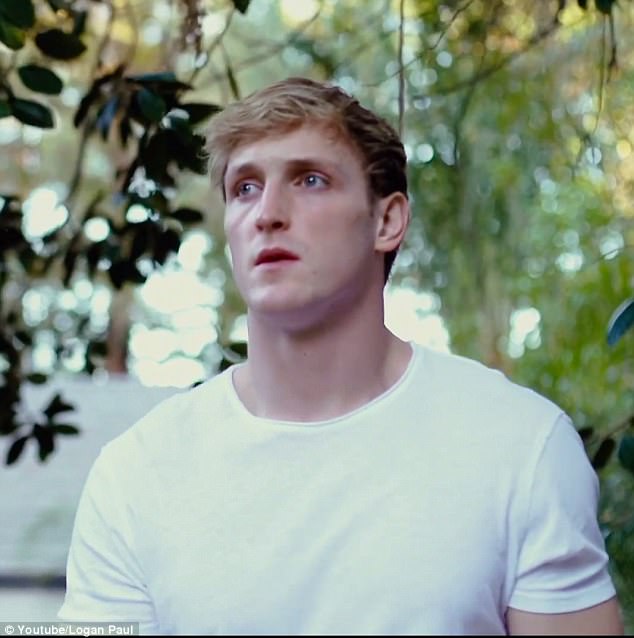 New chapter: Paul said he wanted to ‘immerse’ himself in the ‘conversation’ about suicide 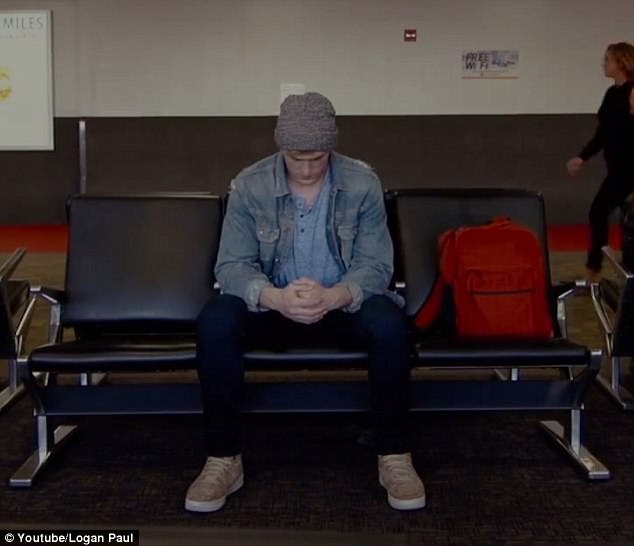 At the start of the video, Paul is seen looking solemn at an airport gate. He said it was ‘just the beginning’ of his quest 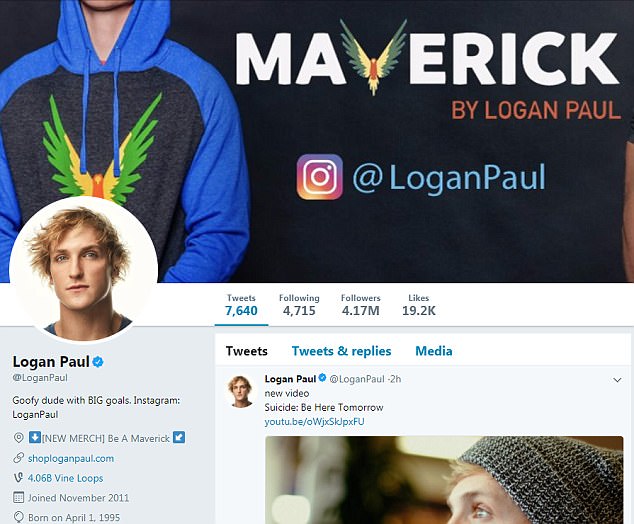 Paul’s Twitter page still contains links in his bio to his ‘Maverick’ merchandise. Critics suggested they should be changed to links to suicide prevention websites

To one, he admits not knowing anyone that has ever killed themselves, saying: ‘No one, no one.

‘That was part of the problem, my ignorance on the subject. I’ve never been more humbled by a single event. I was shocked to discover just how big this is.

I’m here to have a hard conversation so that those who are suffering can have easier ones.’

‘I know while I’m not able to solve the problem by myself I want to be a part of the solution.’

Later, he vows: ‘From this point on, I want to make an effort to contribute and immerse myself in the conversation so I am pledging to donate $1million to various suicide prevention organizations with the first $250,000 going immediately to the National Suicide Prevention Lifeline so they can increase their capacity to help those in need.’

At the start of the video, he appears with Kevin Hines. Hines threw himself off the Golden Gate Bridge when he was 19 but survived.

In a voiceover, Paul described him as ‘one of the many great people’ he has met since he sparked controversy.

At the end of their conversation, he tearfully told him: ‘This has been an honor for me.’

Paul said he embarked on the interviews and video to ‘further aim to understand the complexity surrounding suicide.’ 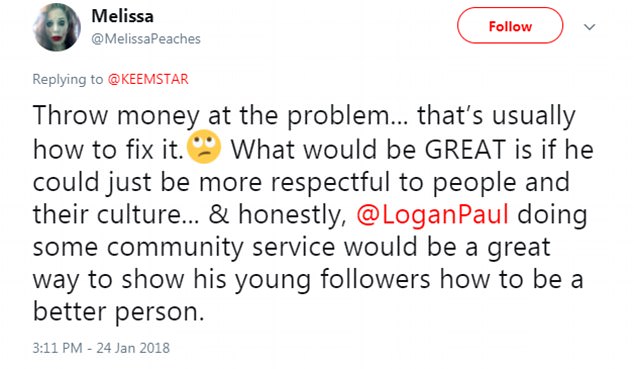 The reaction to the latest video was mixed. Fans of the vlogger embraced it and said they were proud of him. Others accused the star of being insincere and ‘throwing money at the problem’

The video was met with a mixed reaction.

Predictably, his fans embraced it and said they were proud of his effort to learn from is mistakes.

Others asked him to ‘go back to not posting’ and some accused him of ‘throwing money at the problem’ with his charity donation.

It was not Paul’s first attempt to make amends. On January 3, he posted a groveling video to the victim’s family which he published on Twitter, writing: ‘So sorry’.

The offending video in the forest was filmed on December 31. It was part of Paul’s New Year’s Eve challenge to camp there with friends.

The 15-minute video they broadcast on YouTube showed them shamelessly joking around in the forest parking lot before entering it, laughing about the fact that 100 people had killed themselves there that year. 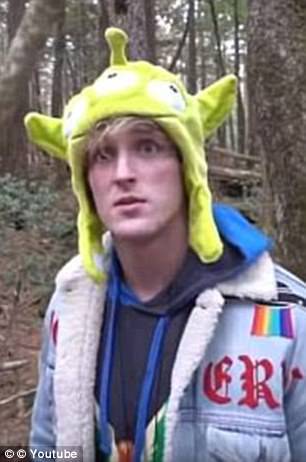 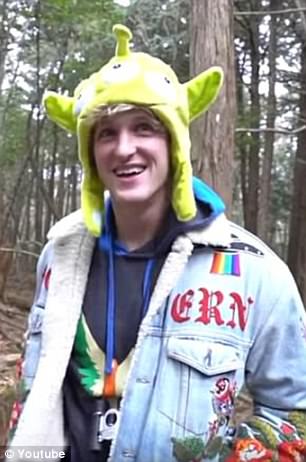 Paul sparked fury earlier this year when he filmed a video in Japan’s ‘suicide forest’ and continued filming when his crew came across a victim. He is shown above in the footage after finding the victim 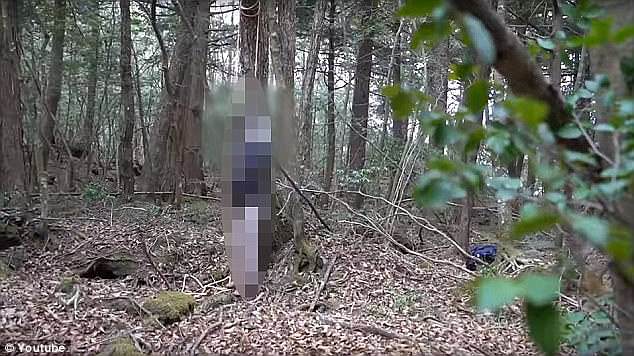 This is an edited version of what Paul published then later deleted. DailyMail.com has obscured the victim’s body. In the video, titled ‘We Found a Dead Body’, Paul called out to the victim, an unidentified male: ‘Yo, are you alive? Are you f**king with us?’ 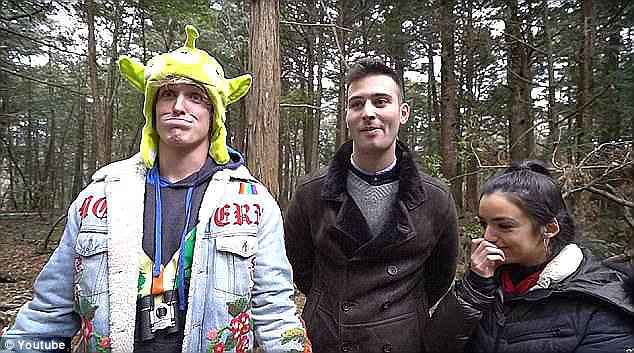 Paul and his friends had gone into the forest for a New Year’s Eve ‘challenge’ where they would camp there with ‘ghosts’. They acknowledged at the beginning of the video that 100 people a year kill themselves in the woodland

After being slammed for the video, Paul signed off social media and said he needed time ‘to reflect’

At the start of it, Paul reached inside to grab an expensive, embellished denim jacket and joked: ‘I will say if I’m gonna get haunted by a ghost, I’m gonna do it in my f****** Gucci jacket. I want to look good.’

Six minutes into the video, they came across the body.

Rather than stopping the camera, Paul proclaims with a look of pantomime terror: ‘I hate to say this but I think there’s someone hanging up there!’

The group stood around talking to one another in shock while their Japanese guide pulled out his phone to call police.

Paul, flipping the camera back on himself, said: ‘A lot of things going through my mind. This is a first for me.’

While he settles into his new chapter, his brother Jake is launching a new endeavour of his own with a social media school. 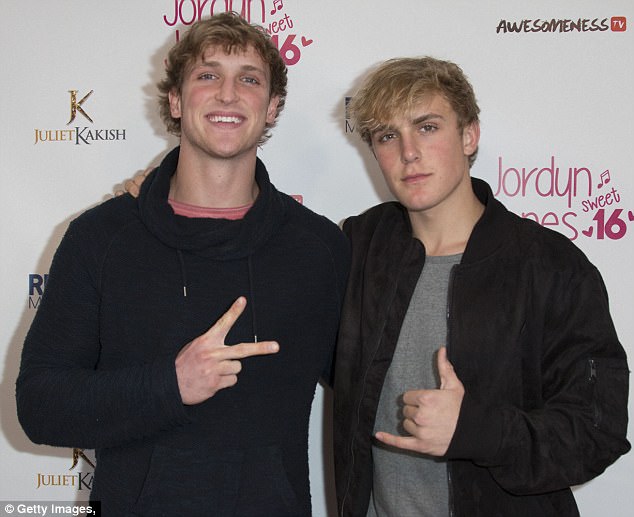 The $64 service is called Edfluence.

Among the nuggets of advice he gives is to follow as many accounts as possible so that they are more likely to follow you back and boost your profile.

Jake has been accused of terrorizing neighbors in his $7million Calabasas mansion where he has been filmed recently filming for his channel.

The brothers enjoyed a meteoric rise to fame and now boast flabbergasting wealth.

Logan is rumored to be worth $14million thanks to his online profile and was adored by his legions of fans until he posted the tasteless video that had been filmed in Japan.

In the footage, he zoomed in on victim’s hands, remarked that they were ‘purple’ and laughed as he told cameramen: ‘What, you’ve never stood next to a dead body before?’

Jake has also met his fair share of controversy.

Earlier this month, he was condemned for saying the N-word while performing a freestyle rap.

His reps said he had ‘matured a lot’ between the time the footage was filmed (at Coachella in April 2017) and when it was published.

If you or anyone you know is in need of confidential support, contact the National Suicide Prevention Lifeline on 1-800-273-8255 or visit their website here