Jaynesh Chudasama, 28, pictured, was jailed for 13 years after admitting killing three teenagers by dangerous driving after driving into them while more than twice the legal alcohol limit

A drink driver who killing three teenagers after mounting the pavement was branded a murderer and told to ‘rot in hell’ by the mother of one of the boys today as he was jailed for 13 years.

Jaynesh Chudasama, 28, was two and a half times the legal limit and had traces of cannabis in his system when he lost control of his Audi A5 trying to overtake another vehicle in Hayes, west London.

George Wilkinson, Josh McGuinness, both 16, and 17 year-old Harry Rice died instantly when Chudasama ploughed into them in Shepiston Lane on the evening of 26 January.

He sat with his head bowed as the victims’ parents spoke of the impact on their lives since the crash.

Sentencing, Judge Wendy Joseph QC said: ‘The anguish and suffering that has resulted from events that evening cannot be easily portrayed.

‘Each boy had different, exciting and admirable plans for his future.

‘Each has had that future taken from him. Each boy was deeply loved by his close and extended family.’

‘Each paint a picture of inexplicable loss, frustration and grief that the lives of their boys have been taken away.’

She added: ‘I have to reflect the deaths of three boys, the loss of three lives and the tearing apart of three families.

‘It is obvious that nothing any court can do will measure the loss of Josh, Harry and George for the obvious reason that their loss is immeasurable.’ 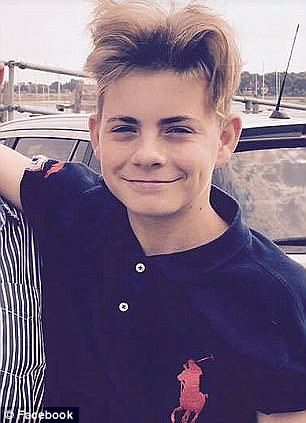 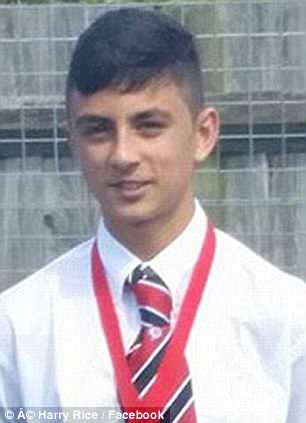 George Wilkinson, 16, left, and Harry Rice, 17, right, were on their way to a friend’s birthday party at a five-a-side football venue when they were struck by the car 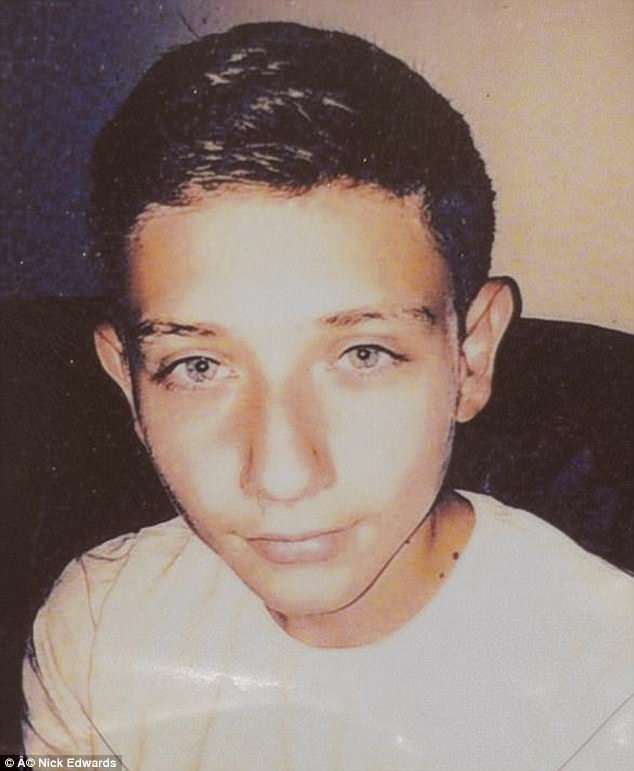 Josh McGuinness, 16, pictured, was also killed when the Audi A5 mounted the pavement and struck the group 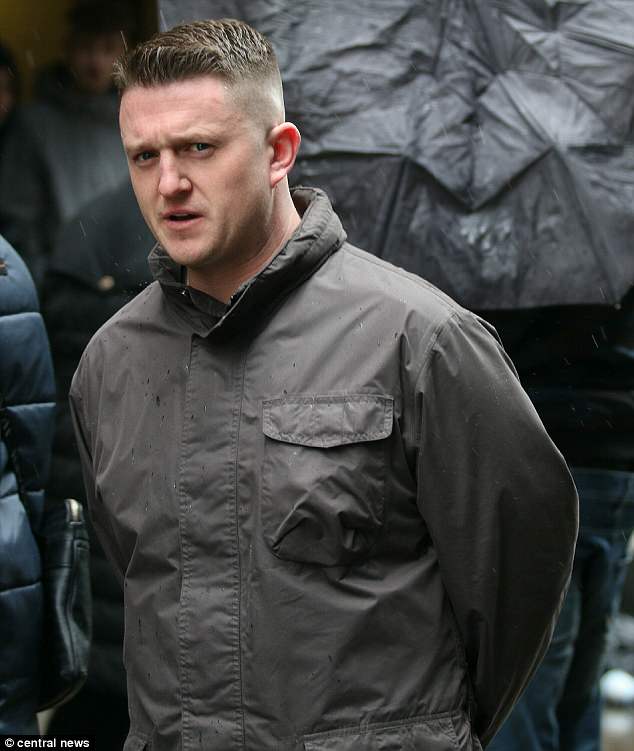 Chudasama was also banned from driving for 13-and-a-half years and ordered to take an extended test once that disqualification ends.

The boys were making their way with friends to a 16th birthday party at the nearby Goals five-a-side football venue when they were struck outside the Esso garage and Cherry Lane Cemetery.

Emergency services rushed to the horror scene but they could not be saved.

Chudasama, a car hire worker, and his passenger abandoned the car and attempted to flee but were chased by the victims’ friends and dragged back to where the boys lay dying.

One of the teenagers later admitted hitting the driver over the head with a bottle to stop him escaping.

The passenger later handed himself in to police and was arrested.

Right-wing activist and former EDL leader Tommy Robinson was among those seated in the packed public gallery.

Chudasama was briefly rushed from the dock after several people in the public gallery erupted in outrage at hearing of the triple killer’s ‘despair’ following his arrest.

His barrister, Leila Gaskin, recalled her first meeting with Chudasama in a small office at the magistrates’ court whilst mitigating the right amount of credit for his guilty pleas.

She described it as being ‘impossible to take instructions from him that day’ as he was ‘in a state of despair’ and ‘barely intelligible’.

But the hearing was interrupted when furious friends and relatives of the boys started shouting down from the gallery above.

Ms Blackwell was temporarily escorted from the court as she blasted at the dock: ‘I hope you get what’s coming to you. The police have covered it up.’

Others taunted the weeping Chudasama as he left: ‘Feel sorry for you? Walk off.’

After Ms Gaskin submitted that eight years was the appropriate sentence in his case, Harry’s mother was ejected shouting: ‘Eight years for three kids? It’s a f***ing disgrace.’ 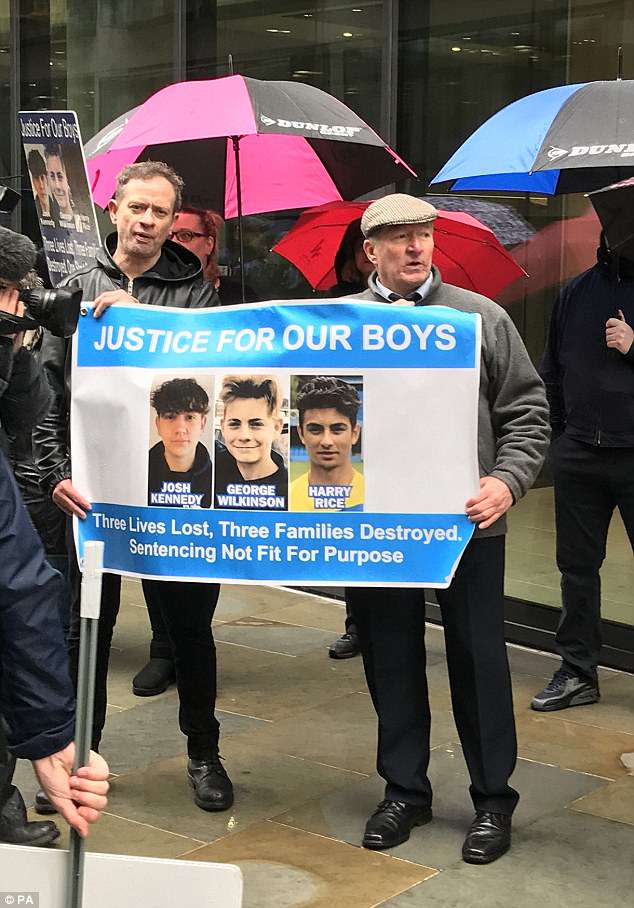 Protesters mounted a demonstration outside the court today, pictured, furious at Chudasama’s expected sentence for death by dangerous driving 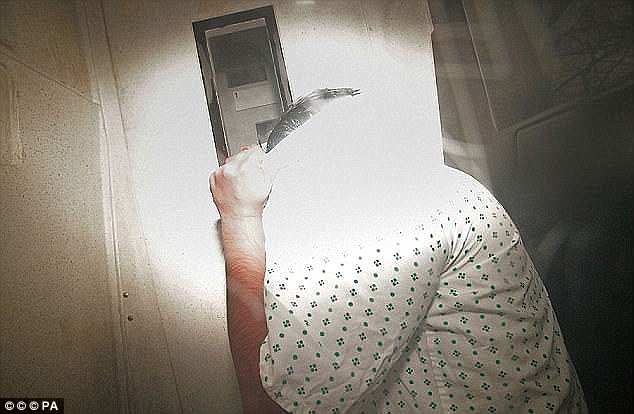 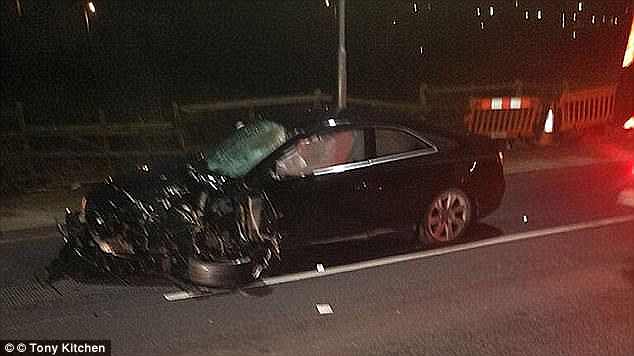 Chudasama attempted to flee the scene, pictured, after the crash but was chased down and stopped by other teenagers with the boys

Ms Gaskin continued: ‘Mr Chudasama sits at the back of this court alone, ashamed and with his head hung, as he has done throughout these proceedings knowing that because of his actions on that night Harry, George and Josh lost their lives.’

She said that Chudasama will be ‘racked with guilt and remorse’ for the rest of his life.

Chudasama submitted more than 40 character references, most of which the court heard described the incident as ‘a tragic accident’.

Described as ‘kind, considerate, caring, hard-working, diligent and exemplary’, Chudasama lost his father in his teens and was left to bring up two younger siblings, now a lawyer and an engineer, as well as look after his disabled mother.

‘He of course will be haunted by this for the rest of his life,’ said Ms Gaskin.

‘He will never forgive himself.’

The barrister explained that Chudasama later claimed to have ‘went out to spend some time with some friends of his, skateboarders’ on the night of the crash.

She said he remained in his car ‘the majority of the time’ before they moved off to a nearby park.

‘The others were drinking and he began drinking too,’ Ms Gaskin said.

She said Chudasama’s intention was to drop his passenger home and get to bed before waking in time for the early shift the following morning.

‘Why he did what he did I do not know,’ said Ms Gaskin.

‘There is some suggestion in the character references that peer pressure might have been an influence.’

But Judge Joseph dismissed the point, remarking: ‘He is 28 years old.’

Josh’s mother, Tracy Blackman, branded Chudasama a murderer from the witness box before telling him: ‘You’re going to rot in hell mate.’ 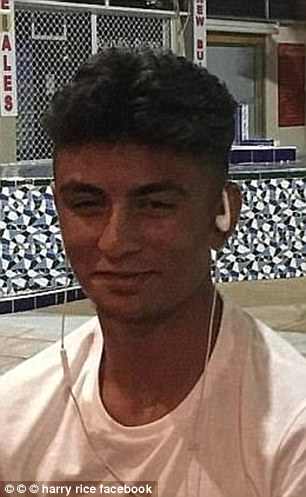 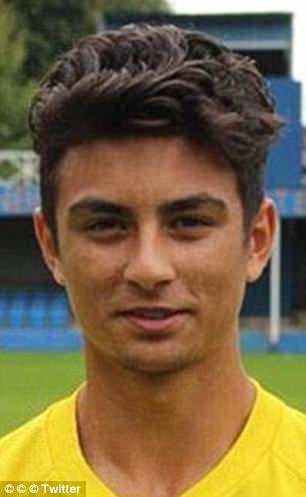 Harry, left and right, was a successful young footballer, who had played for Farnborough FC 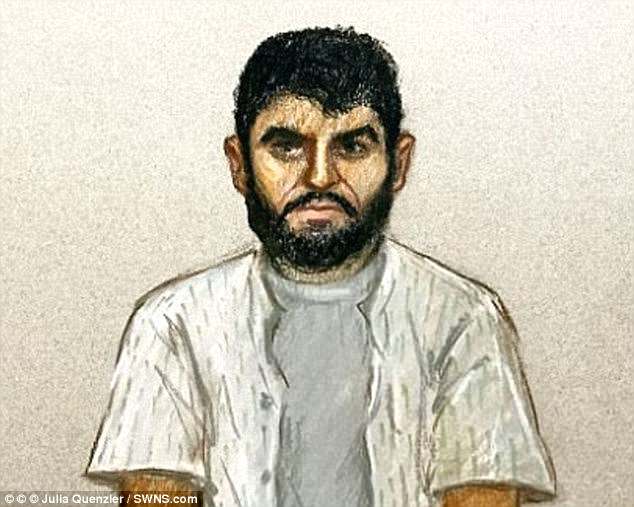 Chudasama, pictured in a court sketch, was told to ‘rot in hell’ by Tracy Blackman, mother of Josh, as he stood in the dock today

After telling the court some of her ‘freedom of expression’ had been wiped from her statement, she described finally welcoming the son she now ‘misses terribly’ to the world after having five girls.

‘From that moment I saw him I adored him,’ she said.

‘There are no adequate words to describe the pain, anger and despair from Josh’s murder.’

She continued: ‘Josh has had his whole life, 65-plus years, stolen from him, 190 years between the three boys.

Branding Chudasama a ‘coward’ she added: ‘Instead of trying to help the children he injured he chose to run away.

‘If it wasn’t for two heroic boys that evening, our boys’ friends, who captured him I truly believe Mr Chudasama wouldn’t be in this country right now.’

Ms Blackman continued: ‘We have no explanation of why he did what he did or what he was doing that night.

‘It is so hurtful that someone could murder our children and seemingly have nothing to say about it.’

Harry’s father, Ian Rice, similarly spoke of having to read his statement ‘under duress’ after late edits which saw various extracts relating to criticisms of the police investigation removed.

Mr Rice told the court that by his actions Chudasama had ‘armed himself with a two-and-a-half tonne weapon’.

‘The death toll could easily have been eight – possibly even more had he collided with any oncoming people,’ he said.

‘It was by the Grace of God that no further lives were lost that day.’ 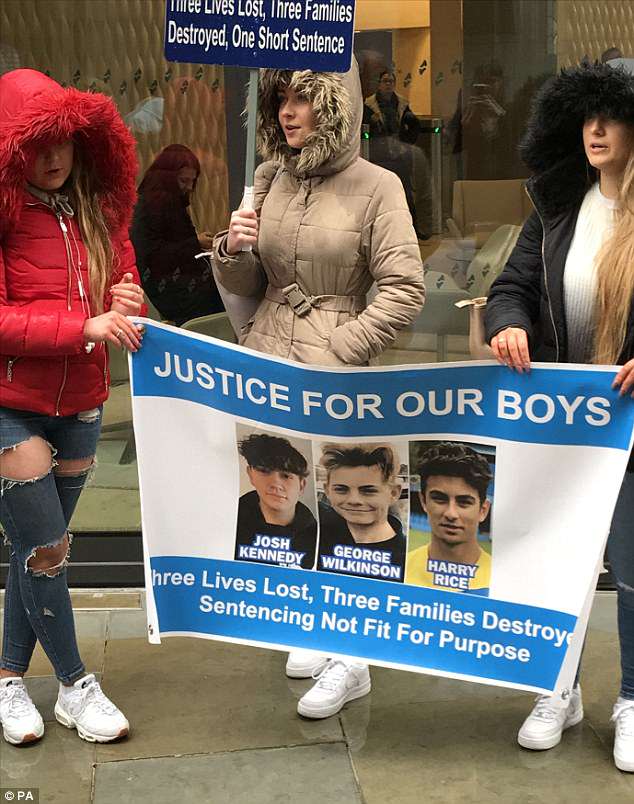 Sarah Baker, George’s mother, spoke through tears of her ‘grief and pain’ at losing her ‘amazing, happy and cheeky boy’.

Due to be married, she described being left ‘absolutely heartbroken’, adding: ‘I’m not sure how I’ll be able to walk down the aisle now without my son or even go ahead with the wedding now.

‘How are we ever going to get over this and be happy again? We are just a broken family.’

Crispin Aylett, QC, prosecuting, earlier told the court: ‘In the course of overtaking another vehicle the defendant, who had been drinking, lost control of his car.

‘The vehicle struck and fatally injured three boys who were walking along the pavement.’

Fellow driver Horace Miller was heading eastwards towards Hayes at about 30mph in a Ford Fiesta when he saw a black car ‘swing around him’.

Chudasama clocked in at 71mph as he sped past Mr Miller on the 60mph road.

Mr Miller explained that he ‘would not feel safe’ to drive at the limit due to the dark conditions.

He described his ‘shock and surprise’ at seeing Chudasama fly past him ‘like a bat out of hell’.

Mr Aylett said: ‘He said that the black car was ‘out of control… when it passed me, the back end had swung out.’

‘The car had gone to hit some pedestrians head on.’

The court heard George suffered catastrophic head and neck injuries and died instantly along with Josh, who was hit with such force that he was thrown over a wall into the cemetery.

Harry was carried on the bonnet until it crushed him against a wall.

A teenage witness said she and two friends were about ten foot away when they saw the car collide with the boys. 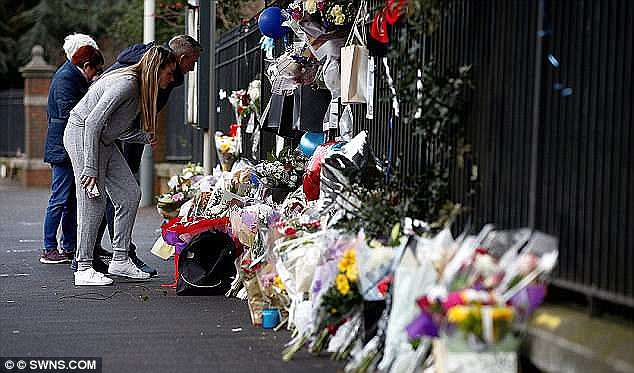 She saw the front seat passenger jump out of the car, open the driver side door and the two of them then ran towards the Esso.

One of the boys’ friends chased after Chudasama with a bottle and knocked him to the ground with it after the crash.

He and another teenage friend then held the driver at the scene while tending to their injured companions.

Mr Aylett said the boy ‘was later to admit to the police that he struck the driver of the car with a bottle. This caused the driver to fall to the ground.

‘The boys then dragged the driver back towards where their friends were now lying. No doubt this was done to stop him from getting away while they tended to the boys on the ground.’

Mr Aylett added: ‘It’s just as well he did otherwise he would have escaped and would have sobered up undetected.’

The passenger handed himself into police where he was arrested and interviewed under caution.

Eight hours after the collision Chudasama provided a blood sample showing he had 78 milligrams of alcohol per 100 millilitres of blood, with the limit for driving being 80.

It’s estimated at the time his blood alcohol level would have been 213 when he drove into the boys.

‘He would then have been over two-and-a-half times the legal limit for driving’, Mr Aylett said.

The three boys had all been in the same year at Hartfield Academy in Uxbridge, leaving in summer 2017.

George had gone on to become an apprentice electrician, Josh was a labourer and Harry a semi-professional footballer.

Grief stricken family and friends left flowers and condolences at the scene following the crash.

George Wilkinson’s grandfather Nigel Goodhand said at the time: ‘I’m really cut up. It hurts. George’s mother has lost the plot. I wasn’t going to stop here, but I had to in the end.

‘I’m upset, but I’m pleased I’ve seen him. He will be sorely missed.’