Dr Stiann Basson, 59, was taking the 30-year old woman’s blood pressure during a medical consultation when he suddenly reached out and squeezed the underside of her knee

A ‘sleazy’ family GP who groped a department store manager at his surgery is to keep his job after he said sorry and admitted he had ‘screwed up’.

Dr Stiann Basson, 59, was taking the 30-year old woman’s blood pressure during a consultation when he suddenly reached out and squeezed the underside of her knee for two seconds.

As he had hold of her leg he said: ‘That’s the reason for the short skirt then.’

Dr Basson later apologised and put it down to a moment of ‘boisterous and laddish’ leeriness but insists he can’t remember it.

The patient – who and not wearing tights due to hot weather – was so stunned by the GP’s conduct she claimed she ‘froze with shock’ and could barely move during the encounter at Basson’s surgery, Keats, in Edmonton, North London.

The victim, said to be ‘confident, high powered and attractive’ later called police and the matter was subsequently referred to the General Medical Council where Basson faced being struck off following a 30 year career in medicine.

Dr Basson later put it down to a moment of ‘boisterous and laddish’ leeriness but insists he can’t remember it.

At the Medical Practitioners Tribunal Service in Manchester South African-born grandfather Basson admitted misconduct but escaped with a one month suspension after he said sorry to the victim, who cannot be named.

He confessed he had ‘absolutely screwed up’ and has since attended a course on ‘Maintaining Professional Boundaries’.

Panel chairman Stephen Povey said: ‘Patient A was an honest and credible witness who did not exaggerate or embellish events. She described Dr Basson’s actions as ‘sleazy’, and we had no reason to doubt that.

‘She felt Dr Basson acted towards her in a sexually motivated way and she was left visibly upset – a fact corroborated by three of her colleagues. 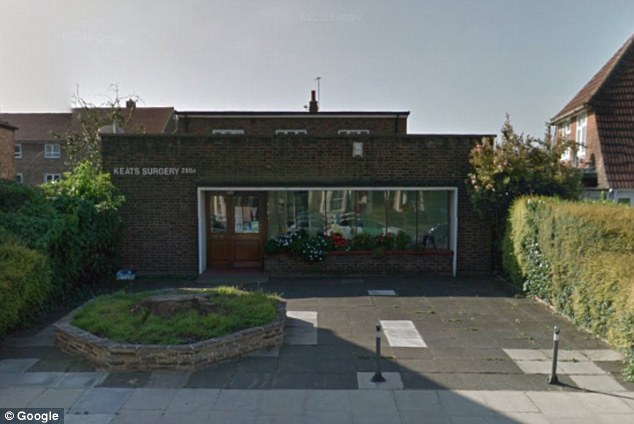 The patient – who and not wearing tights due to hot weather – was so stunned by the GP’s conduct she claimed she ‘froze with shock’ and could barely move during the encounter at Basson’s surgery, Keats, in Edmonton, North London (pictured)

‘Dr Basson accepted his behaviour was a ‘laddish’ act and the word ‘laddish’ implies sexual element. He did not touch Patient A on the hand or the arm, but on the bare skin of her leg and this was accompanied by a comment about the length of her skirt. Such behaviour was likely to be sexually motivated. Patient A was shocked and upset.’

But he added: ‘The Tribunal accepted that this entire experience has been a salutary lesson for Dr Basson, and one that he will continue to reflect on. As such, we are satisfied there is a low risk of repetition, and Dr Basson does not pose any real and current risk to members of the public.

‘Suspension would be appropriate and proportionate in order to uphold the wider public interest, which includes maintaining public confidence in the medical profession, as well as sending a message to the public and the profession about what is behaviour unbefitting of a registered medical practitioner. Whilst Dr Basson’s misconduct is serious – it is at the lower end of the scale of sexual misconduct.’

The hearing was told the incident occurred in July 2016 after Dr Basson had been the woman’s GP for two years.

She said: ‘He asked if I was on my way to work and I said yes and he said “that’s the reason for the short skirt then”. His hand was on my leg for two seconds. I froze. I found this to be very sleazy behaviour.

‘This has never happened to me before. I couldn’t believe it. I was thinking ‘did that just happen’ I was completely frozen. I just wanted to leave. He was acting very sleazy and inappropriately and I did found his behaviour to be sexual. I feel this was sexually motivated.

‘He made me feel uncomfortable commenting on what I was wearing and touching me inappropriately.’

Lawyer for the GMC Chloe Fordham said: ‘She works in a high powered role managing teams of people and working with some challenging members of the public so she had been in some challenging circumstances, but nothing like this. She is a young, attractive, unmarried woman who incurred contact from Dr Basson whilst he was talking to her about blood pressure which made her feel uncomfortable.

‘The conversation was personal, not clinical or medical and he commented on her short skirt. It had nothing to do with positive connotations.

‘She is a confident woman and there is no suggestion of hysteria or exaggeration. This wasn’t a brush of the leg. This was a squeeze and a tap which lasted for two seconds. It was not clinical and totally unnecessary. She is a patient and he is a doctor and he should know better.’

Basson, from Enfield was interviewed under caution by police on August 12 last year but told police he did not recall the incident and denied the allegation. No criminal action was taken against him.

He denied his conduct was sexually motivated but confessed: ‘When the police told me that my behaviour had made a young woman uncomfortable I felt very bad about it.

‘I have never had a complaint in 30 years of working as a doctor. I now know that it was not ok to do what I did and whilst I thought my interaction was friendly, I now know how you could misinterpret that. I understand why she felt uncomfortable and I realise that I absolutely screwed up.

‘She is not a liar and I accept she would have felt uncomfortable by my actions, I was in a position of power and she was in a vulnerable position. I have apologised for her feeling that way but I wouldn’t use the word grabbing to described what happened.

‘I still to this day lie in bed and try my hardest to remember what happened but I just can’t. I’m not the sort of person to do this but if I did then she must be right.’