Fewer than 100 people have been diagnosed with the coronavirus each day in the capital for almost a fortnight since May 7, when there were 149 new cases. This marks a staggering drop from the more than 1,000 cases being diagnosed each day at the outbreak’s peak.

By comparison on May 15 – the latest date for which data are reliable, 52 people were found to have the disease, despite a marked increase in testing capacity over the past month.

Today, 2,615 more people have tested positive for the virus across Britain, taking the total to more than a quarter of a million (250,908). And a further 338 people have died meaning there have been 36,042 victims who tested positive.

And Professor Carl Heneghan, a University of Oxford epidemiologist who has been tracking the outbreak data closely, said 30 per cent of NHS hospitals haven’t recorded a single COVID-19 fatality in the past two days.

He said all signs point to the coronavirus ‘disappearing at a rate that’s speeding up, which is highly reassuring’.

Yesterday, when 363 deaths were announced by the Department of Health, marked the lowest mid-week death toll for almost two months, since March 25.

Signs of the virus fading come as Brits have enjoyed looser lockdown restrictions this week and made their way to beaches and parks as the summer weather kicked off. Thousands of people have been pictured in seaside resorts including Bournemouth and Southend-on-Sea, provoking fears in some corners that social distancing is being ignored.

Meanwhile politicians face the looming decision of whether they will ease the rules even more on June 1, which was the earliest point Prime Minister Boris Johnson said they would consider starting to reopen shops and schools.

Scotland’s First Minister, Nicola Sturgeon, today said that families could soon be able to mix in small groups or play sports together as she set out the country’s ‘road map’ out of lockdown. This contrasts with current advice in England limiting people to mixing only one-on-one with people outside of their households.

And there are doubts that the UK’s contact-tracing app will be ready by June, after the deadline was pushed back from mid-May. Niall Dickson, chief executive of the NHS Confederation – which represents organisations across the healthcare sector – warned the system was being put together ‘very late in the day’ and called for a ‘clear plan’. 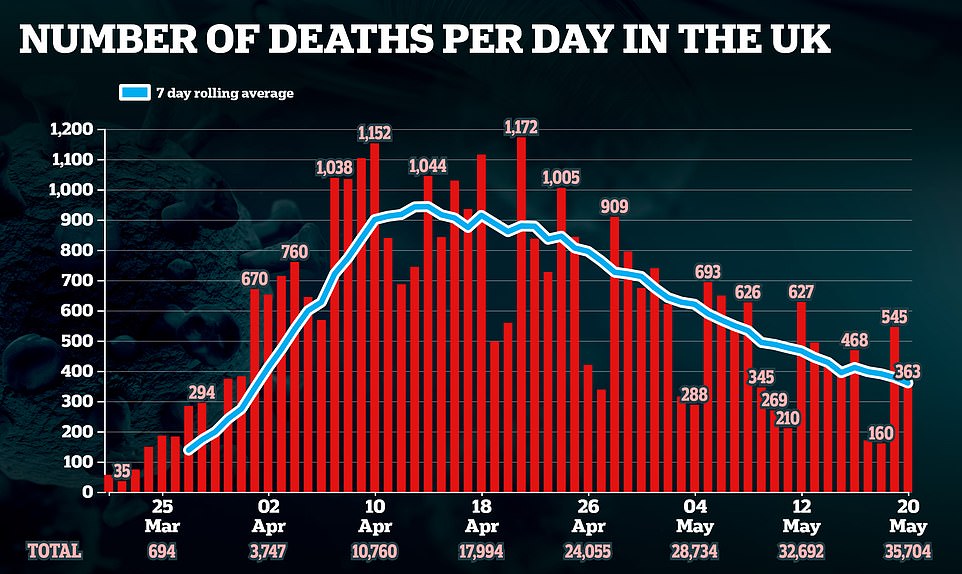 The total death toll for the UK yesterday (363) was the lowest mid-week number for almost two months, since March 25 – the week lockdown began. Experts say almost a third of hospitals have not reported COVID-19 deaths for two days or more 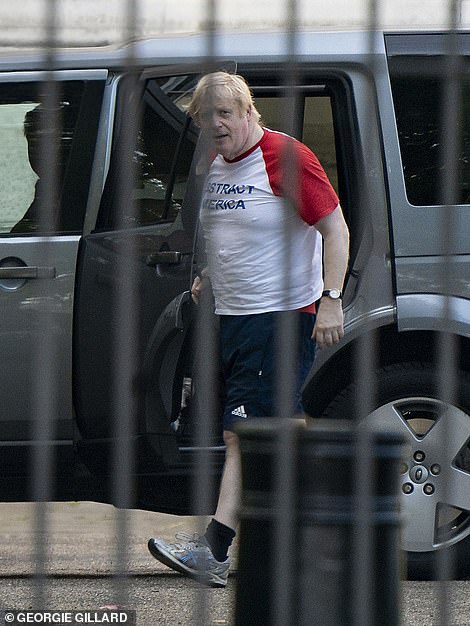 Speaking on BBC Radio 4 this morning Professor Heneghan said at least six hospitals in the city have recorded no deaths in the past 48 hours.

A total of 26,579 people have tested positive in the capital and 5,819 of them have died in hospitals.

Professor Heneghan and colleague Dr Jason Oke have analysed statistics and found that six hospital trusts in London had reported no COVID-19 fatalities in the 48 hours up to today, Thursday May 21.

And across England, 31 per cent of all major hospital trusts have not recorded deaths during the same period – 41 out of 131.

Sadiq Khan, the mayor of London, said he was feeling ‘very cautious’ about the news.

He told the Today programme: ‘The virus is still out there. But what this good news – and it is good news – does give us is a window of opportunity to begin the test, trace, isolate and support programme which we so desperately need. 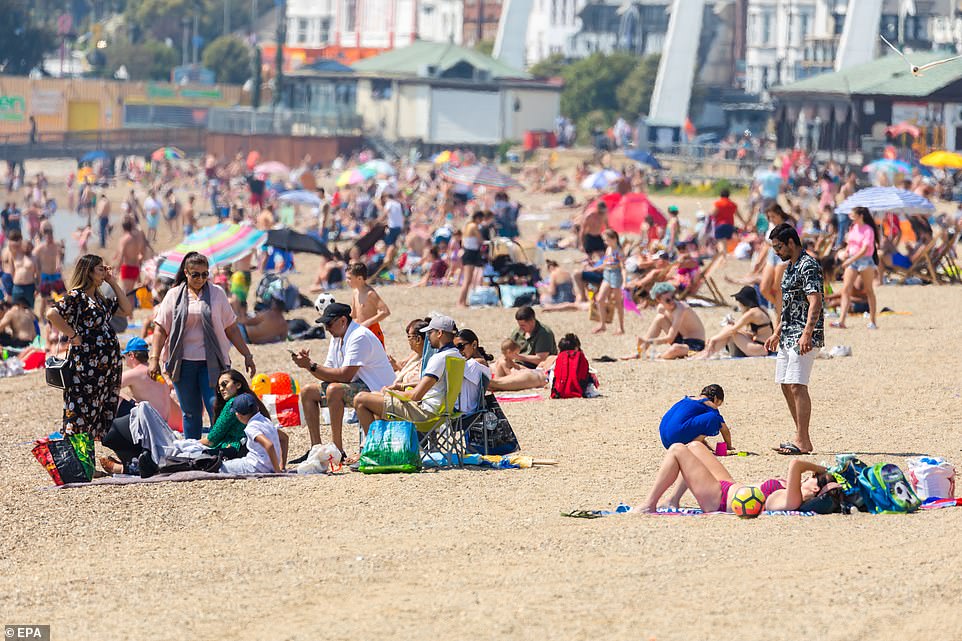 Beaches remained busy today, including Southend in Essex (pictured) where the number of people packing the sand made social distancing difficult 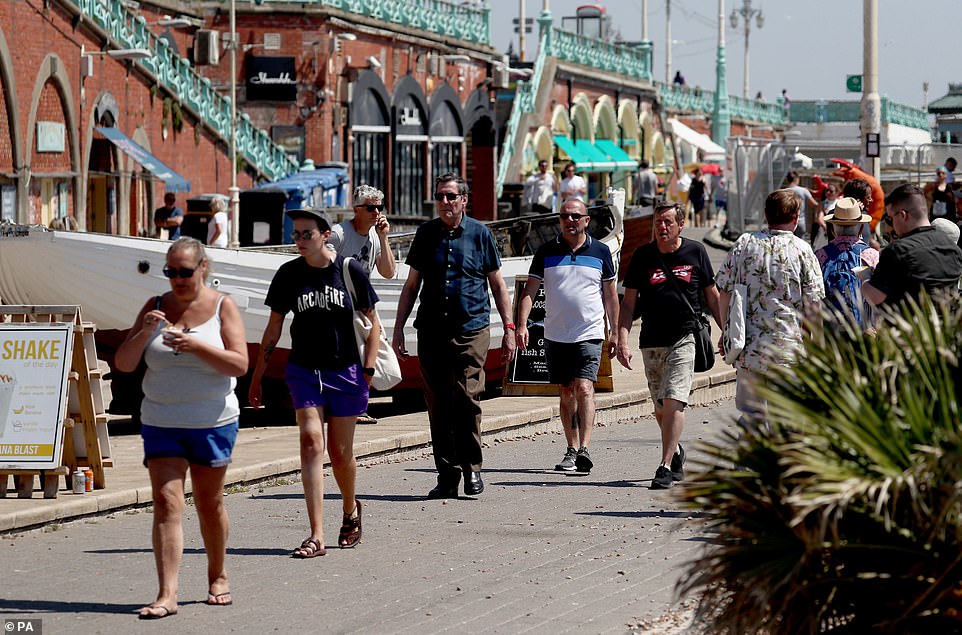 The promenade in Brighton was thronging with visitors today. Scientists believe there is little chance of catching coronavirus outside if people stay six feet apart 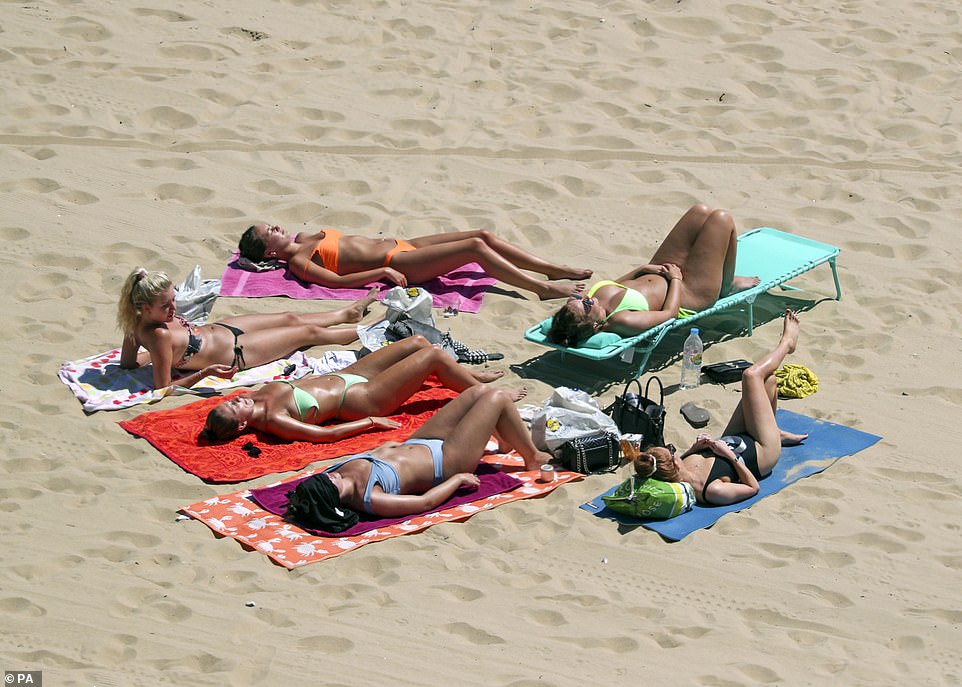 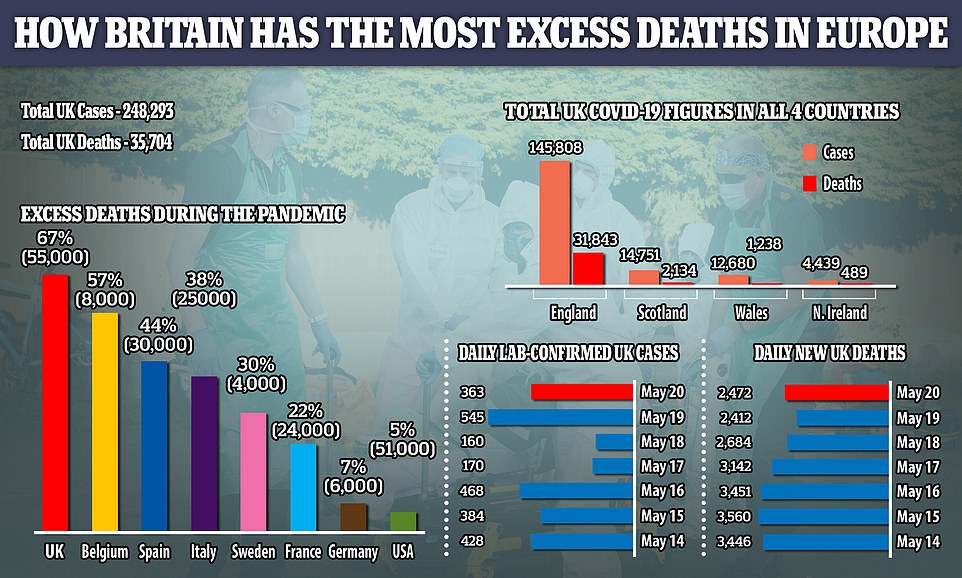 Britain has suffered the highest proportion of excess deaths in Europe during the coronavirus crisis. Excess deaths are those which happen above what would be expected over the same period in an average year

‘We know that test, trace, isolate works best where numbers are low…

Separate data published today the Office for National Statistics (ONS) showed that the coronavirus is still infecting 61,000 people per week, according to national surveillance testing. 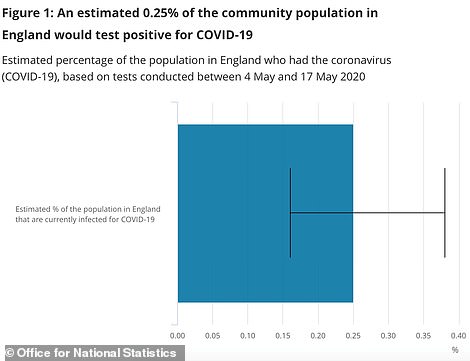 This proportion has dropped by a tiny amount in the past week, from 0.27 per cent last Thursday, according to the ONS.

Professor Paul Hunter, a medicine expert at the University of East Anglia, said: ‘One concerning factor is that the rate does not seem to have declined much since the previous report so does this mean that the decline in the epidemic is perhaps stalling as people start to get out more?

‘Too early to say but we need to monitor this.

‘Hospitalisations and deaths from COVID-19 are still declining, though maybe not as rapidly over the past few days.

‘Deaths occur on average about 23 days after infection so the occupational risk will have dropped substantially in May when compared to April and there may not have been that many new infections in the period of today’s ONS study.

‘So the bottom line is don’t draw too may conclusions from this.’

The government’s statistics body calculated the proportion of the population infected using test results from 14,599 people in 7,054 households across the country. Only 35 people tested positive for COVID-19 when they were swabbed between May 4 and May 17.

The 35 people who tested positive for current infection came from 32 different households, suggesting that many of them either lived alone or had managed to not infect the people they live with.

Britain’s lockdown was relaxed towards the end of the testing period this data covers. More people are likely to have given swab samples in the first 10 days of the still locked down period (May 4 and May 13) than in the four days after lockdown relaxed.

ONS data also did not show that rates among healthcare workers were higher for people who were tested at home in its sample, which it did find when the first round of results were published last week.

This week’s data showed that 0.24 per cent of working adults were infected, regardless of whether they worked in patient-facing healthcare. Fewer than half as many medical workers tested positive compared to last week.

Last week, 1.33 per cent of patient-facing employees tested positive, compared to 0.22 per cent of people with other jobs. However, because the numbers are so small this is easily skewed.

This week’s data showed no increased likelihood of infection based on age or sex.

Professor Sir David Spiegelhalter, a statistician at the University of Cambridge, said: ‘The ONS survey results are very welcome, but their finding that infection rates do not vary between age groups should be interpreted with caution.