This is the heartwarming moment that a househoulder in London fed an incredibly rare albino squirrel.

Squirrels have about a one in 100,000 chance of being born albinism. As well as the white hair and white skin, albino squirrels have red eyes. They also suffer from vision problems.

Ordinarily, squirrels remain with their mothers until they reach about four months old before making their own way into the wild. 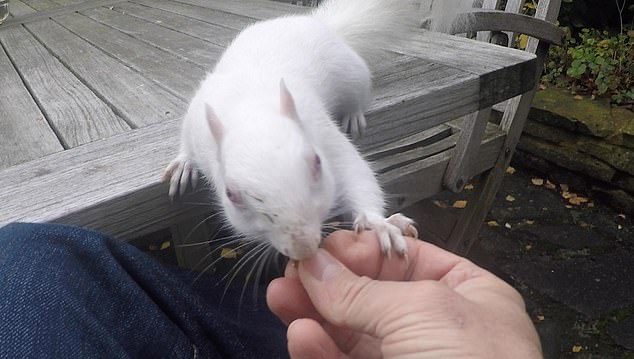 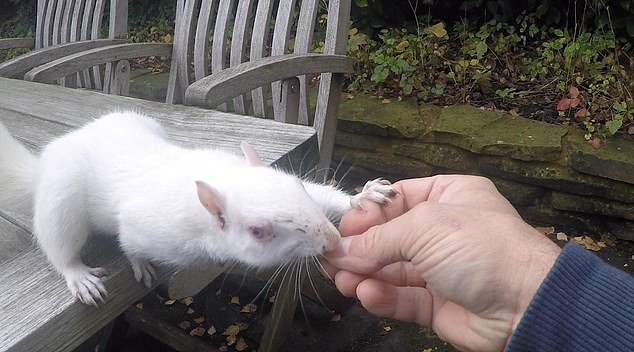 The remarkable footage was filmed in Sutton, south London on December 8.

The squirrel, despite being wild, was comfortable enough to take seeds from the man’s hand.

The albino squirrels suffer from a lack of melanin, which leaves them with white fur and red eyes.

As a result of their albinism, the squirrels have worse eyesight and are easier to track by predators.

In November, Richard Waugh, 51, was thrilled when he spotted the incredibly rare squirrel scampering around outside his flat in Edinburgh.

In June, Muntaqa Dar, 27, came across the completely white animal on a walk with his wife Amreen, 24, and one-year-old son Abdullah in Carshalton, London.

In April, an albino squirrel known as Snow White was seen in Faversham, Kent. The white squirrel has been visiting one home since March 2019.

Why are albino squirrels so rare? One in 100,000 creatures sport white fur due to lack of melanin

Albinism, a genetic condition which reduces the amount of melanin a creature has, can dramatically reduce an animal’s chance of survival in the wild for a number of reasons.

The condition leaves animals with white skin or fur because of a lack of pigment. This is particularly problematic for creatures such as squirrels who need to blend in with tree trunks and leaves to avoid predators.

Another problem faced by creatures with albinism is poor eyesight. The signature pink or reddish eyes albinos have have usually developed abnormally, and so they often struggle with depth perception and focussing on objects.

The increased difficulty in surviving on top of the fact that albinism occurs in just 1 in 100,000 mammal births means that albino squirrels are incredibly rare.

However, it is important to draw a distinction between albino squirrels and the far rarer white squirrel.

White squirrels suffer from leucism, a mutated gene which turns their skin white but leaves their eyes black, meaning they do not suffer with any of the eye problems albinos have.

There are around five million grey squirrels in Britain, but experts believe there are fewer than one in a million that have leucism.