Justin Trudeau had a whistle-stop tour of London today, meeting some of the capital’s most important leaders including the Queen, Theresa May and Sadiq Khan within the space of a few hours.

Earlier today, the Canadian Prime Minister met with the London Mayor where he was dubbed ‘one of the leading feminists in the world’ at a Commonwealth event today.

The Canadian leader met Mr Khan and New Zealand Prime Minister Jacinda Ardern at City Hall today for their first engagement since arriving in the UK for the Commonwealth Heads of Government Meeting.

In front of an audience of children from three secondary schools in the capital, the two prime ministers and the mayor of London discussed gender equality and issues facing the younger generation, in an event marking 100 years since British women secured the vote.

It comes as Mr Khan came under attack from outspoken pop star Morrissey who said he ‘couldn’t talk properly’ in a politically-charged interview on his own website. 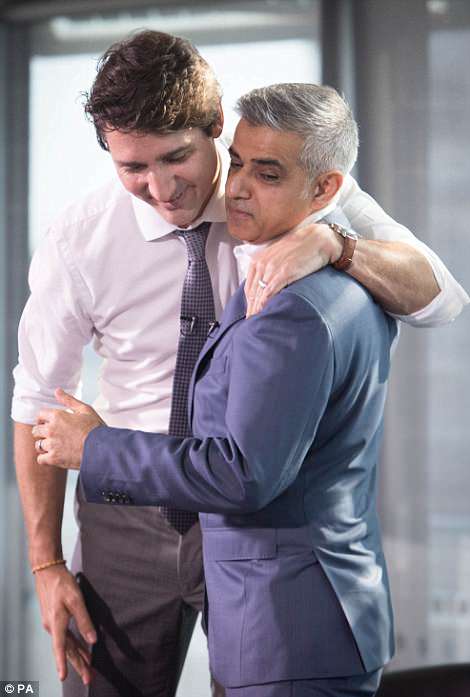 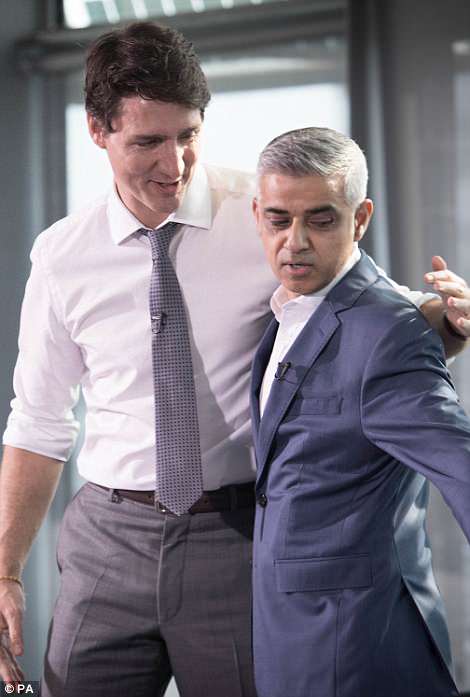 Mr Khan embraced Mr Trudeau, pictured left and right, and called him one of the world’s ‘leading feminists’

As he introduced the two premiers on stage Mr Khan encouraged loud cheering and said: ‘We have got two of the leading feminists in the world, they are in positions of power and influence and they are amazing people.’

Mr Trudeau and Ms Ardern took questions from the youngsters, including on the advice they would offer to someone hoping to be prime minister and their opinions on whether the voting age should be changed.

Ms Ardern revealed her mother had been a huge inspiration when pressed on who her role model was, and how during parliamentary question time she would stand at the dispatch box with a file of letters sent by school children.

She said that during the debate she ‘looks at drawings and pictures from children’, adding: ‘They are not just sending me happy smiley faces, they are most often sending me big worries in the world.

‘Turtles and straws up turtles’ noses, plastics in the sea, they care deeply about issues that lots of people talk about… those letters have an impact on me.’

Mr Trudeau told the audience he is raising his daughter to believe she can achieve anything, with no barriers in her way, but added it is also important for his sons to be brought up as feminists as well.

‘If you think about it, we are in a situation where men are unfairly given more opportunities, more power and more weight to what they say and do because we have an imbalance in our society,’ he added.

‘Well, the men have to be encouraged and brought along and use that extra power and weight we give them to be part of making equality happen, to be part of the solution.’

Mr Trudeau also stressed how gender equality is not just a social issue, but one that is also economic.

Mr Khan also said that because Ms Ardern had lived in the English capital for two and a half years, in his eyes it means a Londoner is the prime minister of New Zealand.

After the event Mr Khan told reporters: ‘What is fascinating about these two prime ministers is that they were keen to come to City Hall.

‘I am not the prime minister, I am the mayor of London, but (they came) to meet with young people and engage, and in this year when we commemorate 100 years since the first women got the right to vote.’ 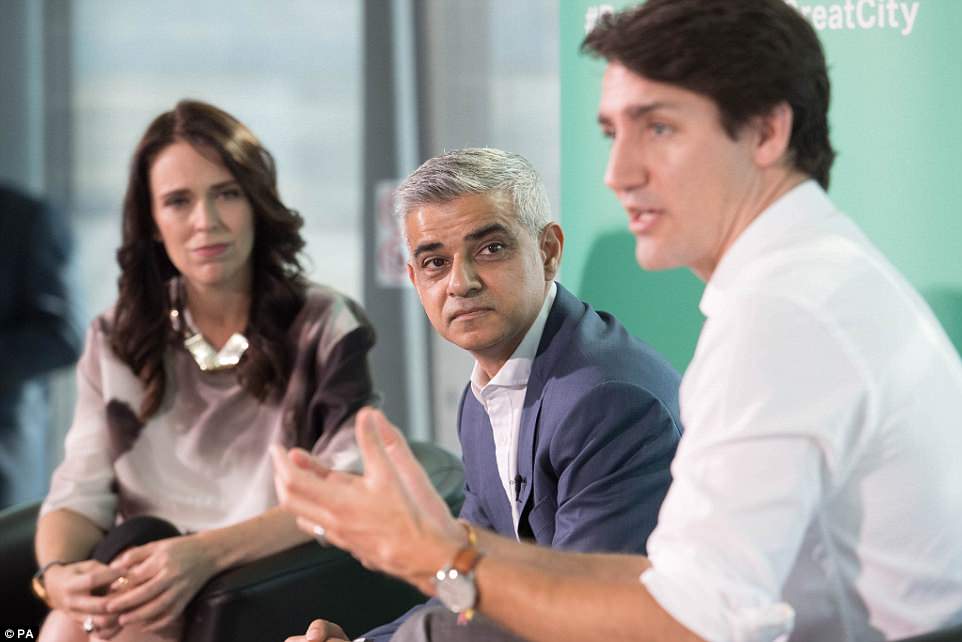 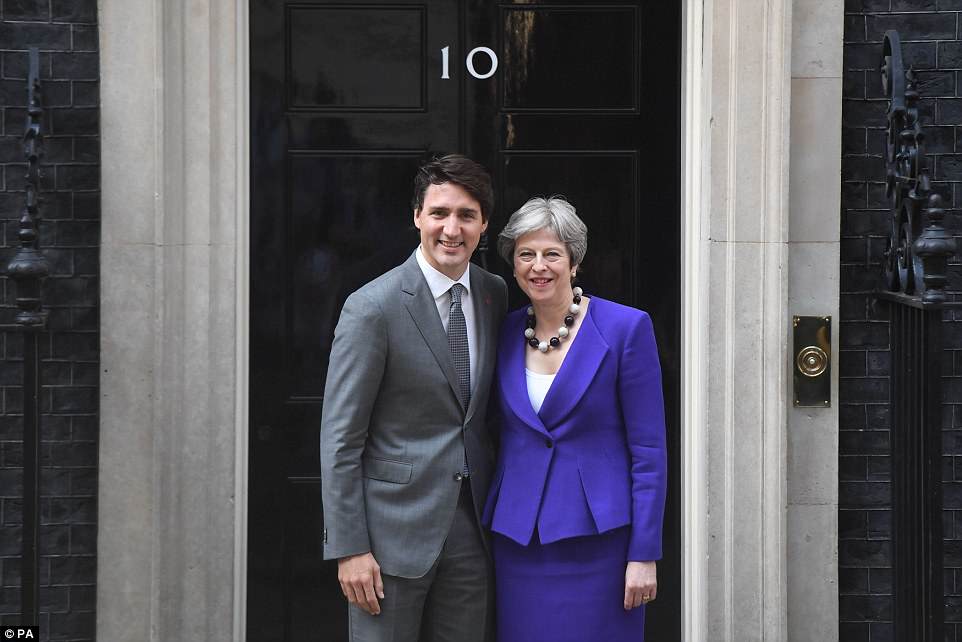 Prime Minister Theresa May greets Canadian Prime Minister Justin Trudeau, as he arrives in Downing Street, London, ahead of bilateral talks during the Commonwealth Heads of Government Meeting 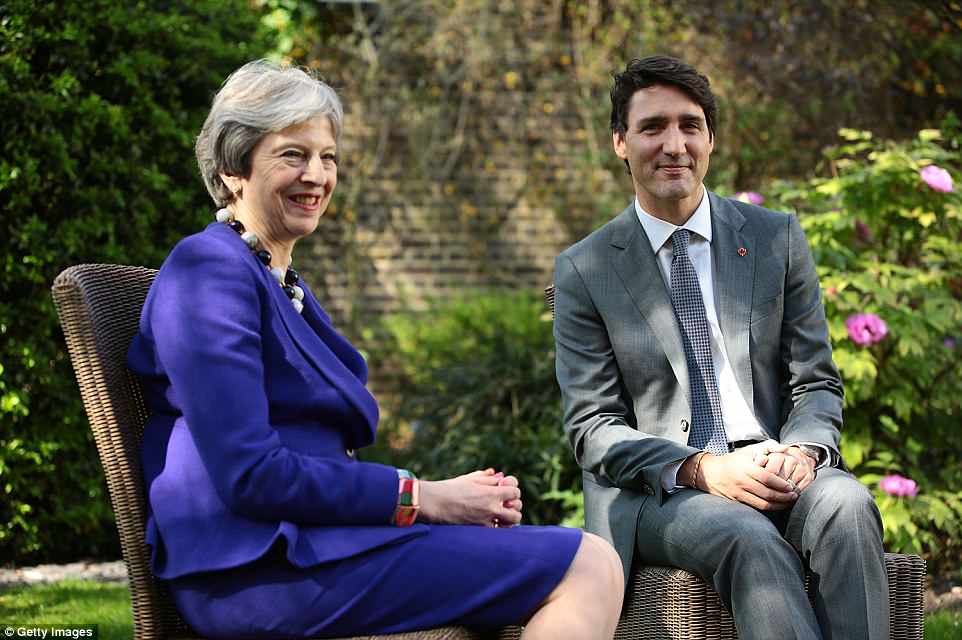 In a packed day, Trudeau also had time to squeeze in a meeting with the British Prime Minister Theresa May during a visit to Downing Street

He said he was impressed by the honesty of the two world leaders and how they are both proud feminists and committed to gender equality.

Meanwhile Morrissey targeted Mr Khan while complaining about halal meat, describing it as ‘evil’ and claiming it needs approval from ‘supporters of ISIS’.

The singer said on the website Morrissey Central: ‘I saw an interview where he [the mayor] was discussing mental health, and he repeatedly said “men’el”… he could not say the words “mental health”.’

Discussing the recent rise in the number of people killed on the streets of London, Morrissey described it as ‘debased’ – adding that the capital was second only to Bangladesh for acid attacks.

Stating that we live in an ‘Age of Atrocity’, he went on to claim that because all the attacks were ‘non-white’, they were not being ‘truthfully addressed’ by the Government, the Metropolitan Police or the BBC due to political correctness.

He also had a rant against Diane Abbott during the talk.

Asked by the interviewer whether he voted to leave the EU, Morrissey replied: ‘No. I don’t have sufficient faith in the circus of politics… It is a moral disaster on every level. Even Tesco wouldn’t employ Diane Abbott.’