Tube passenger sparks outrage after painting his face black for Halloween costume – then tells model ‘why not?’ when she brands it racist

This is the moment a smirking London Underground passenger sparked outrage for painting his face black for a Halloween costume.

The man on the Central Line appeared to have dressed up as Samuel L Jackson’s character Jules Winnfield from the 1994 film Pulp Fiction.

But when he was confronted by a fellow traveller and accused of being ‘racist’ for his black make-up, he just shrugged and asked her: ‘Why not?’ 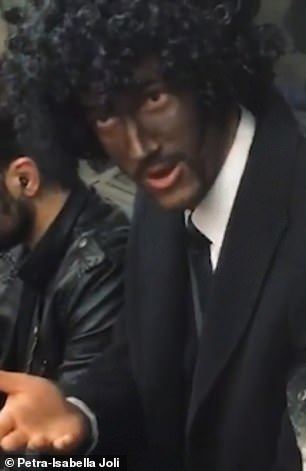 Petra-Isabella Joli (left), 22, a model and IT manager from Surrey, confronted the man (right)

The incident was caught on camera by Petra-Isabella Joli, 22, a model and IT manager from Surrey who had been travelling home on Saturday night at the time.

She posted a video on Instagram, in which he told her: ‘Samuel L Jackson is a person I like’ – but she told him: ‘I wouldn’t try and be a black person’.

She added: ‘I think it’s a bit racist that you put black make up on.’ However, he then said: ‘It’s a person I like, why not?’

In the post, Miss Joli wrote: ‘I was on the Central line going home last night, where I witnessed the disgusting disrespect of blackface shown from this Bulgarian man. 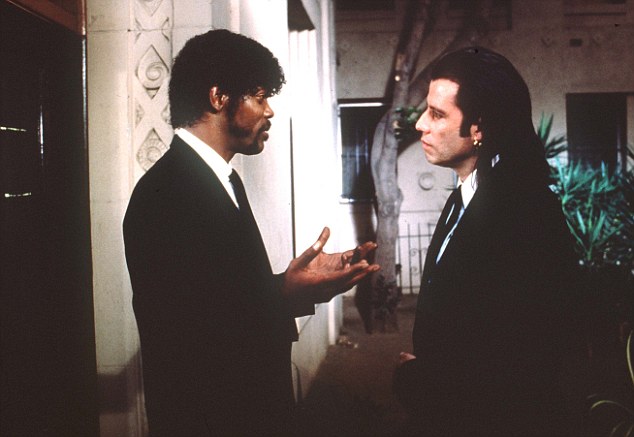 The man appeared to have dressed up as Samuel L Jackson’s character Jules Winnfield from the film Pulp Fiction. Jackson is pictured on screen with John Travolta in the 1994 movie

‘When confronted he claimed to have dressed up as Samuel L Jackson and responded saying ‘why not, it’s a person he likes’?

‘This is 2018 and you’re in London, don’t expect people to sit quiet and not confront you.’

One commenter said: ‘He should know the difference between appreciation and appropriation’ – but another added: ‘People are so easily offended nowadays.’

The incident came as tens of thousands of people hit the clubs of London for Halloween-themed parties on Saturday, four days before the day itself.

* Do you know the man in the video? Please email: mark.duell@mailonline.co.uk *