London woman ‘set up the murder of her on-off boyfriend’

A woman allegedly set up the murder of her boyfriend and posted a video of the dying teenager on Snapchat with the caption: ‘That’s what happens when you f**k with me’.

The couple visited the Costa Coffee close to the Tube station shortly after 5pm, with onlookers describing Mr Safi seeming ‘happy and smiley’.

But other witnesses later told police there was a ‘weird’ atmosphere between Khan and Mr Safi, who had argued in the days leading up to the murder, the Old Bailey heard.

‘[Mr Safi] was the on-off boyfriend of the defendant, Fatima Khan, and the prosecution case is that he was killed by a rival for her affections,’ said prosecutor Kate Bex QC.

‘The prosecution case is that she willingly and knowingly entered into a joint enterprise with Raza Khan to cause serious injury to Khalid Safi and that her role was essential to the success of the plan.

‘She told Raza Khan where to find Khalid Safi and she ensured that Mr Safi was still there by the time Mr Khan travelled to the scene.

‘There is direct evidence of both of these facts and Ms Khan’s behaviour after the murder confirms, the prosecution say, that her intention was to enable Raza Khan to seriously injure Khalid Safi.’

When Raza Khan arrived at the café shortly after 6pm, he seemed to ‘know exactly where he was going’ and confronted Mr Safi after a brief exchange with one of them.

The pair fought for around 15 seconds after which Mr Safi collapsed with a number of stab wounds to his chest.

Jurors heard his girlfriend made no efforts to help her partner either during or after the attack.

‘Instead, she returned to the scene after Raza Khan had inflicted the fatal wound and videoed Khalid Safi as he lay dying in a pool of his blood on the pavement,’ said Ms Bex.

‘She then posted it on Snapchat with a caption ‘That’s what happens when you f**k with me’.

‘Fatima Khan’s reaction to seeing Khalid Safi seriously hurt may be an indication of her knowledge of what Raza Khan was going to do and her intention in that regard.’

She denies murder and conspiracy to cause GBH. 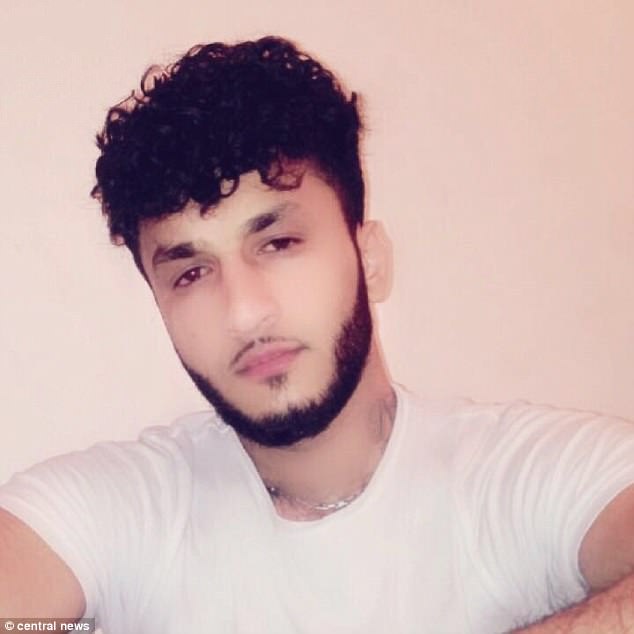 Jurors heard Fatima Khan had been in a relationship with Mr Safi for around two years before he died, having also gone out briefly in 2012 to 2013

A warrant was issued for Raza Khan’s arrest but he has never been found.

Jurors heard Fatima Khan had been in a relationship with Mr Safi for around two years before he died, having also gone out briefly in 2012 to 2013.

A friend of the couple later told police the two men had previously fought a few years earlier and Khan had stabbed Mr Safi in the shoulder.

‘Five days before the murder, things between Fatima Khan and Khalid Safi were clearly coming to a head,’ said Ms Bex.

‘He had bought her a watch as a present but when he visited her at her home address she threw it at him from an upstairs window as he stood outside because she was very angry he had turned up at her house, her family home, because her family did not know she was seeing him and she did not want them to see him outside.’

On the day he died, Mr Safi spent the early evening from about 5pm with Khan sitting on benches outside the Costa Coffee close to North Acton tube station.

‘It is clear from the CCTV that they were not getting on very well,’ said Ms Bex.

‘The images show Ms Khan constantly on her phone with Mr Safi standing a few feet away from her, effectively being ignored.’ 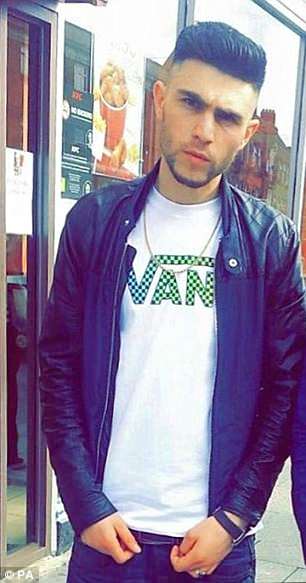 When Raza Khan arrived at the café shortly after 6pm, he seemed to ‘know exactly where he was going’ and confronted Mr Safi after a brief exchange with one of them

A witness later described it appearing obvious they were together but that there was a ‘weird atmosphere’ between the couple.

At one stage a café employee noticed Fatima Khan taking ‘an abnormally long time’ in the branch’s toilet.

She claimed to have been ‘tying her headscarf’ but was also spotted on her phone.

Records later confirmed she had made a call lasting more than seven minutes.

‘The prosecution suggests that Ms Khan took an abnormally long time in the lavatory in order to delay Khalid Safi so as to ensure that Raza Khan had enough time to travel in his minicab from Arnos Grove.’

He arrived at around 6.30pm and ‘walked straight over’ to the pair with ‘a large object seen glinting’ from his left hand.

After exchanging a few words with one of them, Ms Bex said he turned to Mr Safi at which point ‘the knife on his left-hand side would have been in plain view of Mr Safi’.

‘Mr Safi then produced a screwdriver and the two men began to fight,’ she continued.

Jurors heard the brawl only lasted for around 15 seconds, during which Raza Khan put his hand on Mr Safi’s back to bend him over whilst using his left to plunge the blade into his foe’s abdomen.

Raza Khan quickly left the area walking back the way he came, discarding his coat in an alleyway which had been ripped by Mr Safi’s screwdriver during the fight.

‘Khalid Safi died at the scene having received a number of stab wounds to his chest,’ said the prosecutor.

During the brawl Fatima Khan was seen running back into the coffee shop where she called a friend asking: ‘Where the f**k are you? You need to hurry the f**k up. Everything’s got f**ked.’

Ms Bex told jurors the call confirms she ‘had a prior arrangement’ for the pal to come and collect her from the scene and was so urgent because Safi had also been armed.

Police are still trying to trace Raza Khan and a £5,000 reward for information is being offered by the independent charity Crimestoppers.

Khan, from Ilford, denies murder and conspiracy to cause grievous bodily harm.