The lions at London Zoo are part of a breeding programme in which 70 per cent of cubs are dying, a study has found.

The lions are all descended from a very small number of ‘founders’ brought over to Europe in the 1990s.

But the ‘extremely high degree of genetic similarity’ of the founders’ offspring is ‘detrimental’ to their health, according to researchers.

The European Endangered breeding programme was set up to save the Asiatic lion in the mid-1990s.

The idea was to have a pool of pure Asiatic lions that could be reintroduced to India if the species became locally extinct.

Nine founder lions were brought to Europe, of which four went to London Zoo, while the rest went to Helsinki and Zurich zoos. And even these ‘founders’ were already highly related – with six of the lions sharing the same grandparents.

In December 2009 the EEP population of Asian lions had risen to 93 individuals across 34 zoos. But the study found 68.4 per cent of cubs from this family were dying at birth or shortly afterwards.

The report in the journal Mammalian Biology said the breeding programme at the zoo was ‘not viable’ long term. There are currently four lions at London Zoo. Dr Paul O’Donoghue, one of the report’s authors, said the high number of deaths called into question the zoos’ lion conservation programme. 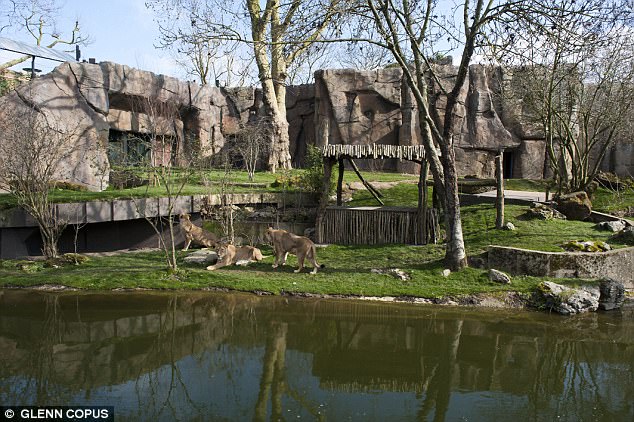 The geneticist at the University of Chester said: ‘Sixty per cent of lion cubs [are dying]. There are situations where they’ve bred the grandfathers with the granddaughters. This shows that the concept that zoos are conservation tools is completely false. This research blows that idea apart.’

The report said the death rate was much too high considering the lions had access to top grade veterinary care.

There were 523 Asiatic lions in the wild at the last count – a species much rarer than the better known African lion.

The EEP lions are so closely related, the report said, that further matings were not advisable. It suggested new lions from India need to be added to the breeding programme to ensure the ‘long-term viability of the offspring’.

Malcolm Fitzpatrick, curator of mammals for ZSL (Zoological Society of London) said: ‘We welcome this study and the advancements in science that will assist in the conservation breeding of Asiatic lions and other endangered species in zoos throughout Europe and India.

‘[It] may also assist with management of isolated populations in the wild that themselves have limited genetic variability.’