‘Lonely’ boy, six, calls 911 asking for a friend and is thrilled when Florida cop shows up at home

A Florida law enforcement officer is being praised for way he treated a little boy who called 911 asking for a friend because he was lonely.

The boy, who has not been named, phoned the emergency operator on Tuesday from his family home in Tallahassee, Florida, without his mother’s knowledge after they had a verbal disagreement, police told DailyMail.com.

The Tallahassee Police Department said she was surprised when a cop, named as Officer White, arrived at the house to play with the boy and teach him the proper use for calling 911.

The police department shared touching photographs of their encounter on Facebook where dozens commented to praise Officer White for his kindness.

‘From our Patrol Bureau: Sometimes we respond to a 911 call and it’s a great opportunity for something positive!,’ TPD wrote on Facebook. ‘Officer Joe White responded to a 911 call where a 6 year old was upset & called 911.

A six-year-old Florida boy called 911 and Officer White responded to the scene. The child, who has not been named, told the cop he called because he was upset and feeling lonely 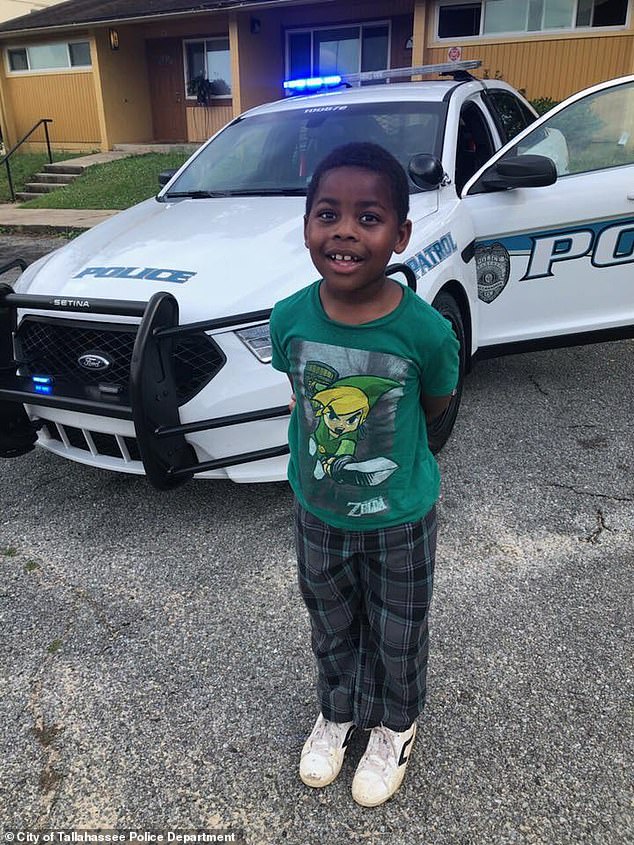 ‘Officer White arrived to meet the caller—a child who said he was lonely and wanted a friend. He asked Officer White if he would be his friend.’

The child’s mother was home at the time but he told cops she had been mean to him.  TPD public information officers told DailyMail.com that his brothers were also inside the home at the time. But it seems the youngster wanted other options.

While some might see the encounter as a waste of police time, Officer White turned it into a positive learning experience rather than carrying out a negative telling off.

The Tallahassee Police Department elaborated that it was a good lesson learned for both the youngster and perhaps the general public too.

‘Officer White took the time to explain how 911 is used and how it’s for emergencies,’ they explained in the social media post.

The law enforcement officer even stuck around to show the child more about what life on the force is like.

His department added that instead of making the boy feel bad he ended up presenting him with a gift that might make him feel a little less lonely when it comes to playtime. 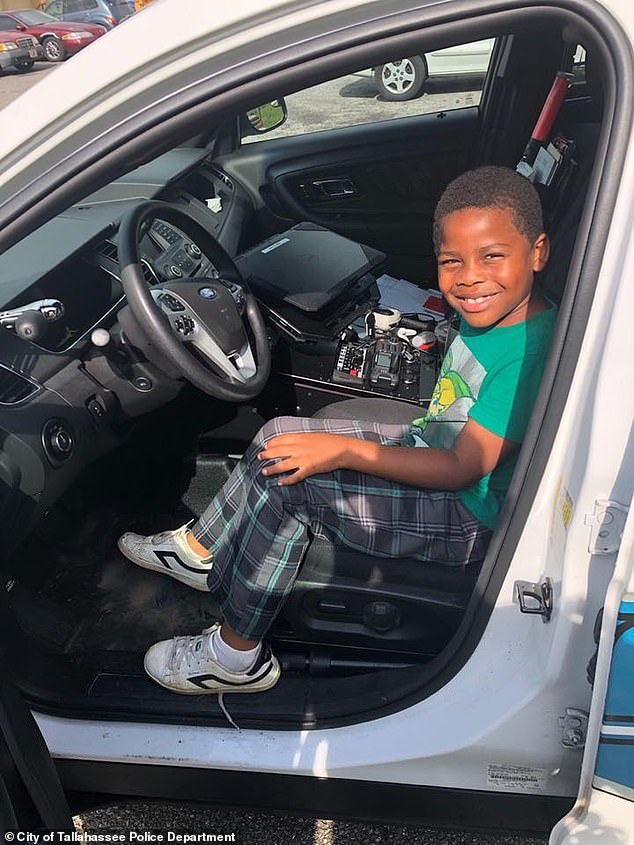 The boy got to sit in the police vehicle and was given a stuffed animal. He asked White if he would be his friend to which he said he’d be happy to

The youngster also got to sit in the patrol car and got to spend some time with the kind cop who gave him a stuffed animal.

‘More importantly, Officer White said he’d be happy to be a friend,’ TPD captioned a collection of images from the encounter. ‘Our new friend got to sit in the police vehicle, was given a stuffed animal and now has a friend at the Tallahassee Police Department!’

The photographs show the pair grinning together.

‘#GoodNews Here’s Officer Joe White & his new friend who called 911 without his mom knowing,’ they shared in a later update on their page. ‘Officer White said he’d always be a friend! We have a new friend! #positiveencounters #mentoring #communitypolicing.’

All was well with the child. The 911 operator said he simply wanted to chat.

‘He just wanted to talk about different things. We learned we both like watching Dinotrux,’ she told WCTV.

It was a surprising outcome for her as she often has to deal with negative incidents.

‘When children call we kind of navigate if we should talk to the parents, what we should ask them. We try to find out out what’s going on,’ she explained. But on this occasion she cried purely because the encounter was so innocent and a rare one she was grateful to have. 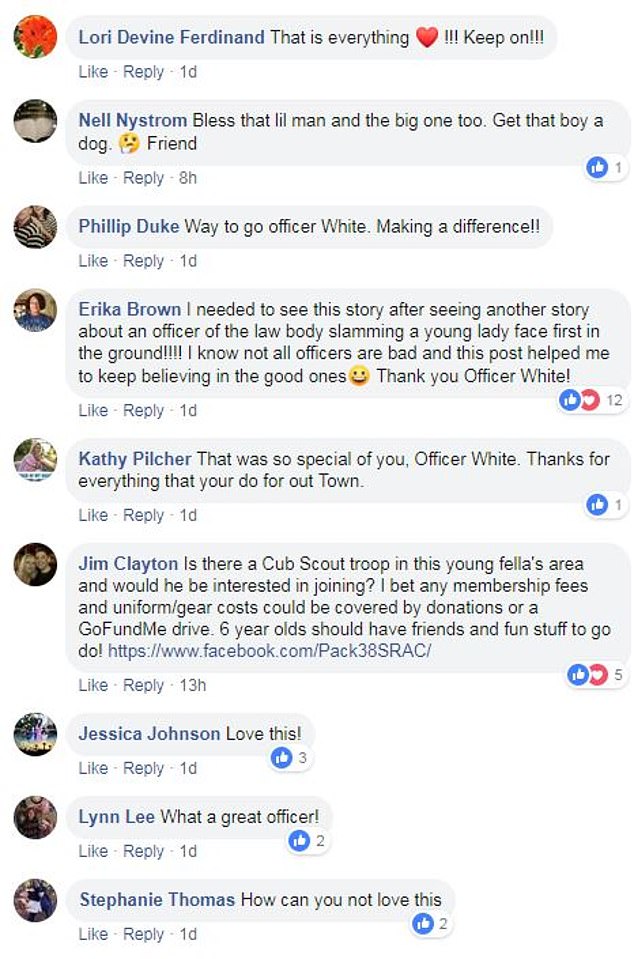 The TPD posts garnered hundreds of shares and likes plus thousands of comments from the proud community.

‘Thank you Officer White! A new Friendship…something positive for a change. What a handsome young friend!’ one person commented.

Another wrote: ‘So stinking cute! Kids need to know not all officers are bad!’

It even inspired followers to reach out to the boy. One said they planned on sending him a card.

Others saw it as an opportunity to arrange a playdate. One person wrote: ‘How sweet!!! My kiddos would love to be his friends!’

Another said: ‘My 6 year old would love for him to visit our little farm and play with him and be his friend… Tpd…. Message me and he can play with Billy the kid too… This little goat we got from lcso..’

The TPD spokesperson said he was simply ‘being a kid’. And while they have received many positive responses, there were the usual negative comments too.

‘A lot of people have assumed he was home alone but he was just being a kid. We actually get a lot of call like this,’ Public Information Officer, Damon Miller, told DailyMail.com.

His colleague Rachelle Denmark told DailyMail.com: ‘In watching the body worn camera footage, there was no indication of any bullying or lack of friends. The young man was upset because his mother was making him do something he didn’t want to do such as play calmly in his room or clean his room.’

Denmark agreed that the sometimes kids will be kids.

‘It wasn’t an unusual request for a mother of her son but as children, we sometimes don’t want to do what our parents tell us to do. His older brother is in his late teens (large age difference) so the young child was wanting a friend,’ Denmark continued to DailyMail.com. ‘His mother was surprised he called 911 but was home with the young child. We were happy to talk to him and show him our police car, give him a stuffed animal and tell him we’d be his friend.

‘The officer spent time talking to the child about the purpose of a 911 call and what constitutes an emergency. His mother seemed appreciative of the time we took with the child and explaining the use of 911.’