Lonely cat hoarders are more likely to be unmarried women

It’s a character often stereotyped in literature, but a new study shows that ‘cat ladies’ are very much real.

Researchers looked at the psychological characteristics of people who collect animals, and found that they were most likely to be unmarried women.

The team hopes their findings will help to categorise a new type of mental illness, known as ‘Animal Hoarding Disorder.’

Researchers looked at the psychological characteristics of people who collect animals, and found that they were most likely to be unmarried women (stock image)

– The average period that people lived with animals was 23.09 years

– Most didn’t have a partner and lived alone

Researchers from Pontificia Universidade Catolica do Rio Grande do Sul in Brazil analysed the psychological characteristics of so-called ‘animal-hoarders.’

Their study involved 33 people identified through animal welfare officials, who between them owned 915 dogs, 382 cats and 50 ducks.

The researchers described these people as having ‘animal hoarding disorder’, in which they had more animals than they could competently take care of.

One of the key aims of the study was to pinpoint the distinct characteristic of people with this condition, compared to people with general hoarding problems.

The team found that almost three quarters of the hoarders were female.

‘The average age of the sample was 61.39 years and the average period that individuals hoarded or lived with a large number of animals was 23.09 years.’ 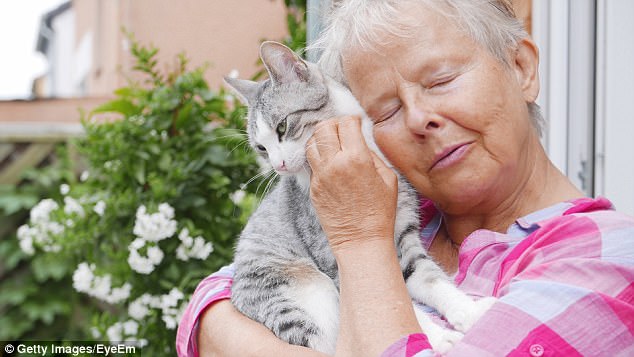 The team found that almost three quarters of the hoarders were female, with an average age of 61.39 (stock image)

They wrote: ‘Regarding marital status, it was observed that most individuals did not have a partner and lived alone.

‘In this sense, living with animals would provide emotional comfort to hoarders who present difficulties in affective relationships.’

A larger scale study may be needed to verify the findings.