Some say there’s nothing in this world that can’t be solved by a natter over a cup of coffee.

And it seems the NHS agrees, as patients are being prescribed coffee mornings to tackle loneliness.

GPs are being urged to refer ‘frequent attender’ patients to activities in the local community. Known as ‘social prescribing’, they can also include art classes, walking groups, dance lessons and volunteering opportunities.

They also claim the sessions boost patients’ confidence, enabling them to better take care of their own health. Social prescribing is already offered in some areas but NHS England wants it to become far more widespread.

Patients who benefit most tend to be over-65s who are lonely, depressed or suffering from long-term health conditions.

One surgery in East Sussex claims the activities have led to a 60 per cent drop in visits among frequent attenders in six months.

It comes as GP surgeries become increasingly concerned at the ageing population. The number of over-65s in England is projected to increase by 21 per cent by 2025, from 9.5 million to 11.5 million. And by 2035, almost a fifth of that age group are predicted to be living with four or more long-term illnesses including cancer, heart disease and dementia.

NHS England is urging health trusts and Clinical Commissioning Groups (CCGs) to work more closely with local councils, which run social activities. Dr Nick Harding, a senior medical adviser at NHS England, said: ‘Wouldn’t it be amazing to see health and care without boundaries, the NHS working with local authorities for the benefit of the local population? Now that would change everything.’ 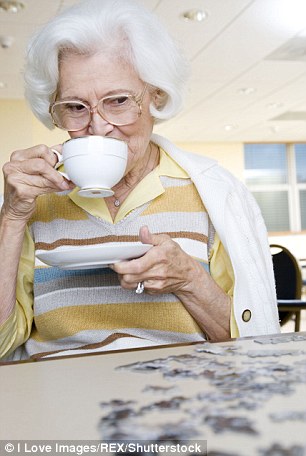 Patients who benefit most tend to be over-65s who are lonely, depressed or suffering from long-term health conditions (File picture)

The scheme began last year and in its first six months, the number of GP visits by frequent attenders fell by 61 per cent.

In Haverhill in Suffolk, patients are referred to history classes and art and culture groups. Cambridgeshire and Peterborough CCG also refers older patients to art groups and breakfast clubs.

Although charities are broadly supportive of social prescribing, the initiative may prompt concerns that patients are simply being fobbed off.

Many surgeries are coming up with initiatives to reduce their workload such as offering patients group appointments with 14 others or online video consultations.

Caroline Abrahams, charity director at Age UK, said: ‘Practical and emotional support is vital when it comes to managing long-term health conditions and the biggest impacts on health are usually made by things that happen outside the consultation room.’

But Marjorie Wallace, chief executive of the mental health charity Sane, said: ‘While it may seem innovative to have social prescribing, we question how that will [help the situation] without extra funding and a national strategy.’

She also accused the Government of ‘dismantling’ many day centres that could have been used for social prescribing.