With the roll out of a long-anticipated free app made by the company, Filmic, Apple users can now link two iPhones to record video simultaneously, giving them the ability to use an unprecedented multi-cam setup.

The app, called ‘DoubleTake’ is tailored to Apples triple-camera system in the iPhone 11 and allows users to record and switch between two simultaneous devices through a single interface.

Users have multiple options when it comes to how they want to visualize their setup, including a split-screen mode that divides two video streams in a horizontal 50:50 ratio and a picture-in-picture or PIP mode that overlays a smaller picture on a full-screen one. 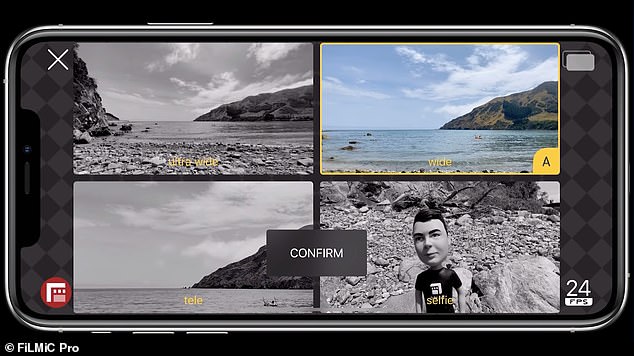 Videos shot in a split-screen style will be exported to the app’s library as one file, while PiP style shooting allows users to split their

DoubleTake also allows users to choose which cameras they want to film out of. In the iPhone 11’s case, they will have an option to select either an ultra-wide setting, wide, telephoto, or even the front-facing selfie camera.

Likewise, it lets users choose between 24 and 30 frames-per-second and up to 1080p resolution.

The DoubleTake app also borrows well-liked features from Filmic’s separate Pro app, including a histogram that judges color ranges and tools that control exposure and focus.

Filmic’s simplified tool for iOS will likely further cement Apple’s push to become the go-to tech company for those looking to capture movies swiftly and affordably.

The latest advancements are an evolution of a partnership that started In 2015, when filmmaker Sean baker used only iPhones and Filmic software to capture ‘Tangerine’, a feature film that made its way to Sundance.

Since then, Apple has worked to foster the iPhone’s role as a tool for creatives working in film to some major successes.

Hollywood director Steven Soderbergh used only iPhones to shoot ‘High Flying Birds’, a feature-length film that was released on Netflix.