The girlfriend of British Olympic gold medalist Greg Rutherford has today slammed the ‘gargantuan egos’ of rugby players after two Irish stars were cleared of rape.

Susie Verrill, who last year revealed she had slept with two former England rugby players, said that she has seen players ‘prey on women like meat’ at social events.

Her comments, which were not directed at any individuals, come after Irish internationals Paddy Jackson, 26, and Stuart Olding, 25, were cleared of rape yesterday following a nine-week trial at Belfast Crown Court.

They were accused of sexually assaulting the same woman when they went back to Jackson’s flat after a night out in Belfast. 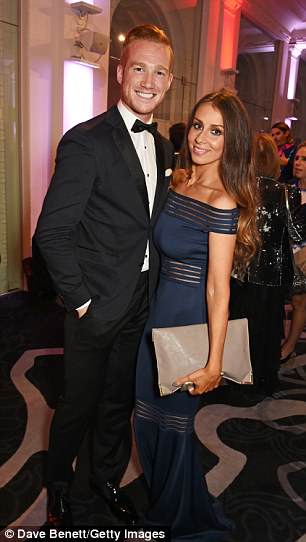 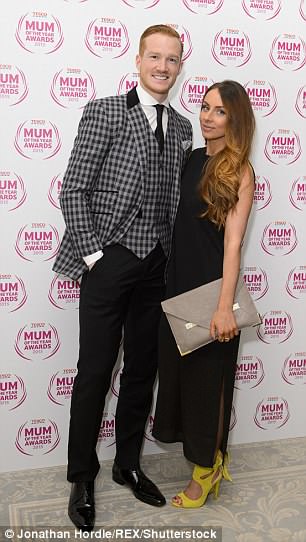 Ms Verrill, who last year revealed she had slept with two rugby players, said that some have ‘gargantuan egos’ 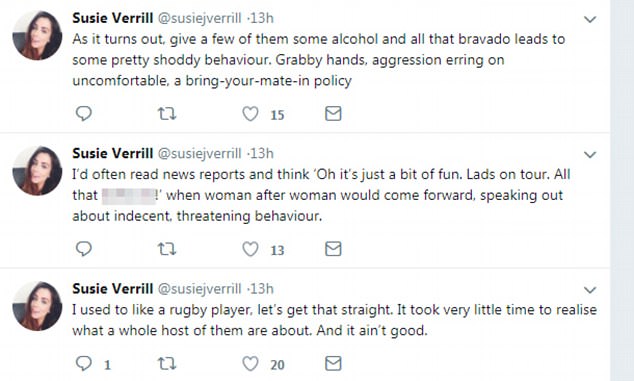 After they were cleared, the hashtag #IBelieveHer – in support of women taking allegations before the courts and this woman herself – was trending worldwide.

And now Ms Verrill has weighed into the argument by saying that she has felt ‘violated’ when leaving some clubs being surrounded by players.

‘I used to like a rugby player, let’s get that straight. It took very little time to realise what a whole host of them are about. And it ain’t good.

‘Thankfully I was never in a position where I went home with anyone & felt the need to report it the next day.

‘But I have left bars feeling violated by behaviour conducted in front of others and unable to do much about it.

‘I’ve seen other players at events, watch them prey on women like meat. Seen conversations they’ve had between one another. It’s just so inappropriate teenage boy.’

Last year, Ms Verrill – who has two children with the Olympic long jumper, 31 – showed off her baby bump with a naked photograph of her clutching her breasts. 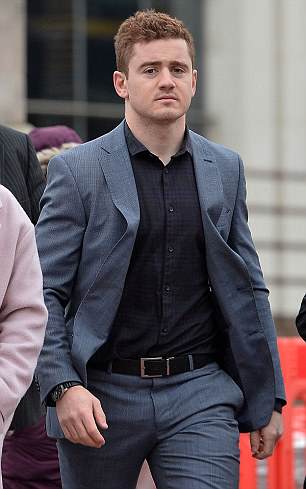 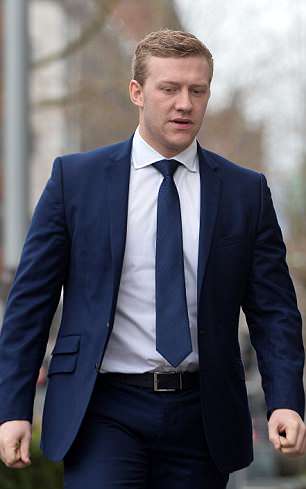 Paddy Jackson, 26, (left) and Stuart Olding, 25, (right) were accused of raping the woman at a party back at Jackson’s home and were both cleared yesterday 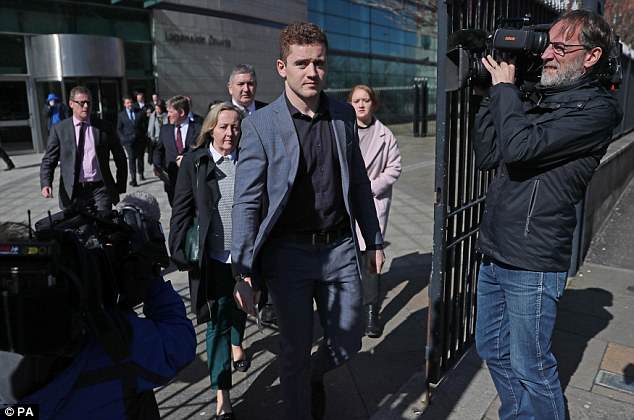 Jackson, who played 25 times for Ireland, was photographed leaving Belfast Crown Court after being cleared of rape 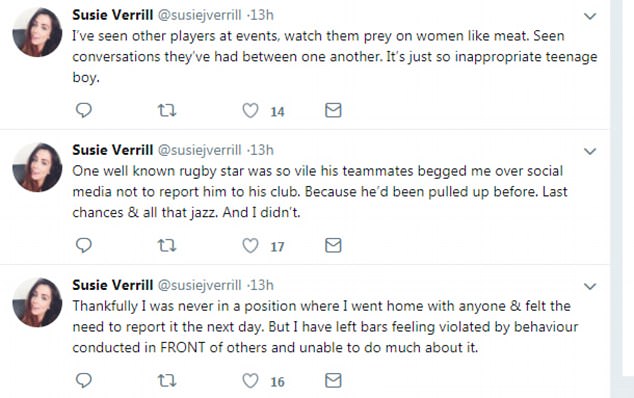 The jury cleared them of all charges after hearing Jackson and Olding were in a WhatsApp group which discussed having a ‘spit roast’ and how sex with the woman was ‘like a merry-go-round’.

Both Jackson and Olding were cleared alongside their friend Rory Harrison, 25 – who denied perverting the course of justice and withholding information.

Another friend Blane McIlroy, 26, was accused of one count of exposure but the four defendants were cleared of all charges relating to the alleged incident in June 2016.

But just hours after they were found not guilty, in response to the wider issues raised by the case and in support of the woman and other’s in a similar position before the courts, thousands of people tweeted #IBelieveHer.

On Thursday, a rallies in six places across Ireland were due to take place following the verdicts.

One rally, in Belfast, was organised by Reclaim the Night Belfast, which is a group which is campaigning against harassment and gender-based violence.

On Facebook, the group wrote: ‘The feminist movement is calling a rally in response to the impact of the recent rape trial in Belfast.

‘There is a lot of anger and upset among women who have observed the treatment of the woman in this case and found it harrowing and re-traumatising.’ 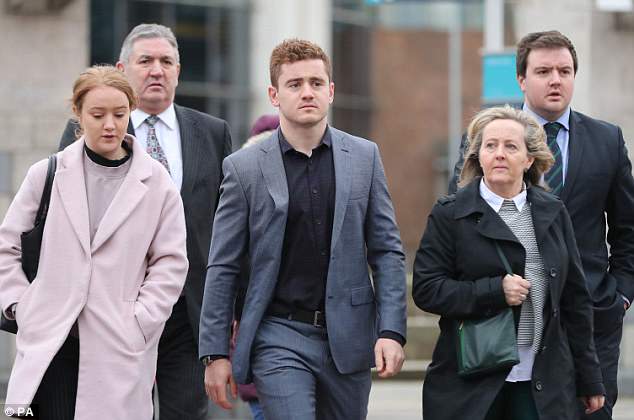 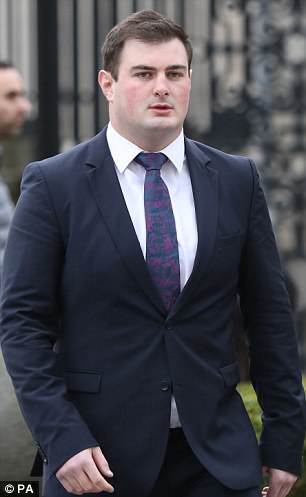 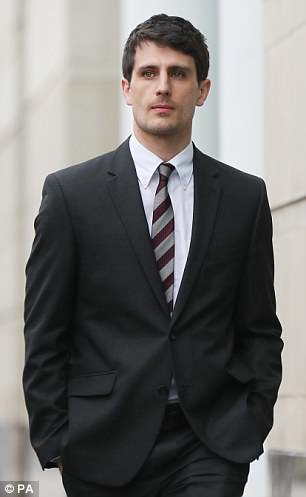 Many used their messages to support the woman who gave evidence throughout the trial, which was described by the judge as ‘probably the most difficult trial any jury in Northern Ireland has been asked to adjudicate on’.

After the case yesterday, Jackson – who was also cleared of a separate charge of sexual assault – said: ‘I’d just like to thank the judge and the jury for giving me a fair trial, my parents for being here every day, as well as my brother and sisters.

‘Out of respect for my employers I’ve nothing further to comment.’

Meanwhile, Olding’s solicitor Paul Dougan, read out a statement on behalf of the rugby player.

He said: ‘I want to acknowledge publicly that though I committed no criminal offence on the evening of June 28, 2016, I regret deeply the events of that evening.

‘I want to acknowledge that the complainant came to court and gave evidence about her perception of those events. 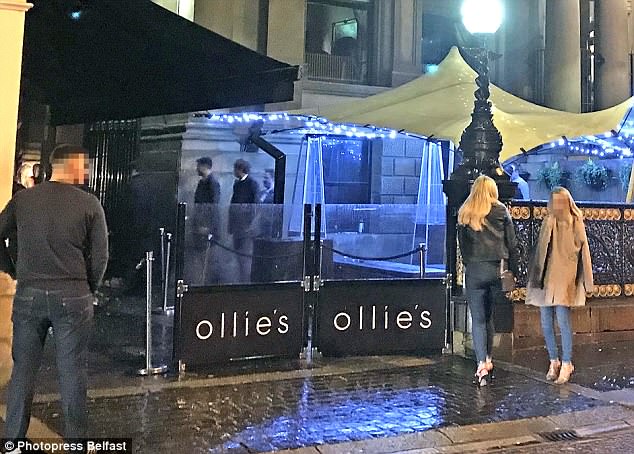 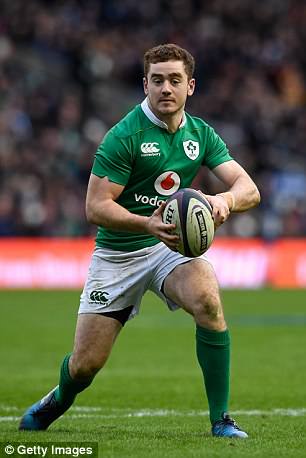 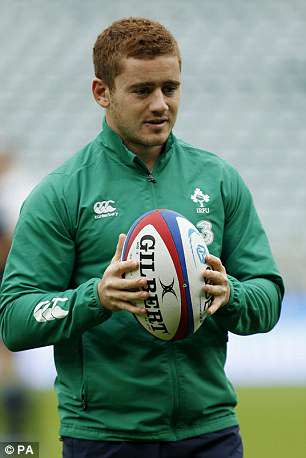 ‘I am sorry for the hurt that was caused to the complainant. It was never my intention to cause any upset to anyone on that night.

‘I don’t agree with her perception of events, and I maintain that everything that happened that evening was consensual.’

The court had previously heard how the rugby players were accused of boasting with their friends about a ‘spit roasting’ on a WhatsApp group.

The jury was told that Olding allegedly wrote ‘we are all top sh****rs, before adding: ‘It was like a merry-go-around at a carnival.’

He also wrote: ‘There was a bit of spit roasting going on last night fellas,’ the court heard.

It is also alleged that Jackson replied on the same WhatsApp messaging service: ‘There was a lot of spit.’

Messages in their group included jokes about ‘pumping birds’ and a photograph was shared with the caption ‘Love Belfast s****.’

In another message also read out, McIlroy allegedly boasted: ‘Pumped a bird with Jacko on Monday, roasted her, then another on Tuesday night.’

A review by the Irish Rugby Football Union and Ulster Rugby is now underway following the verdict.