Long lines are forming at California evacuation centers as hundreds of thousands of residents are being forced out of their homes while fleeing from the raging wildfires sweeping the state.

At least nine people have died and 35 are missing in the massive wildfire in Northern California, while in Southern California, thousands of homes are under threat and all of Malibu has been evacuated as two other fires bear down.

More than 300,000 people from across the state have been forced to flee their homes, as the fast moving flames from the fires that all started on Thursday have raced to cover more than 200 square miles.

Evacuation alerts left more than 300,000 people across California looking for shelter from the wildfires. Students at Pepperdine are seen in the campus’s dining area on Friday 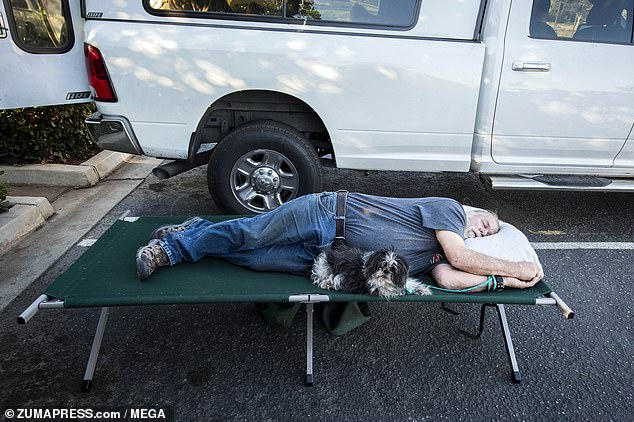 Whipped by the notorious Santa Ana winds gusting up to 60mph, the southern blazes have not yet killed or injured anyone, but have destroyed many homes and forced thousands to flee for their lives on short notice – including many celebrities who live in the wealthy coastal enclaves under threat.

The larger of the two southern blazes, the Woolsey Fire, has scorched as least 35,000 acres north of Los Angeles since igniting near Rocketdyne at around 2pm local time Thursday, quickly spreading southwest toward Newbury Park and Thousand Oaks.

The American Red Cross and other organizations have been scrambling to open evacuation centers across the impacted areas, as people have been told to leave their homes due to the encroaching fires.

In Ventura County, some of those shelters were filled to capacity by Thursday night, with space slowly opening up Friday after as people were able to find alternative accommodation. 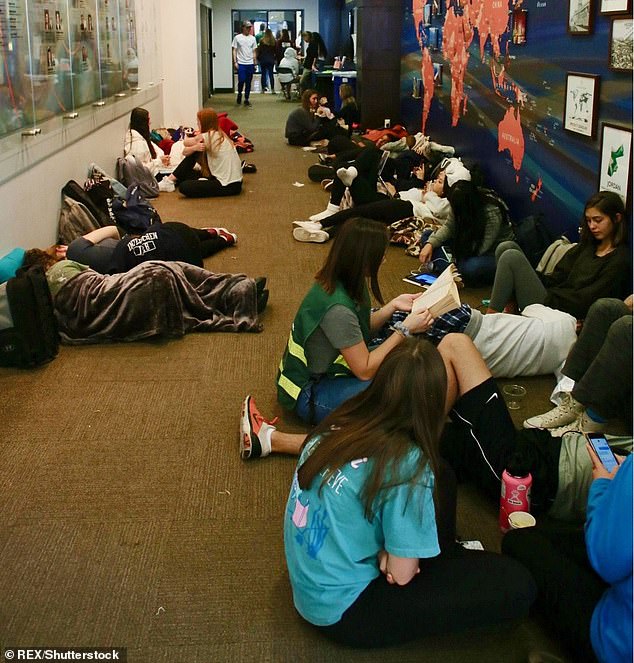 Pepperdine students are seen here in the hallways, waiting for the all-clear 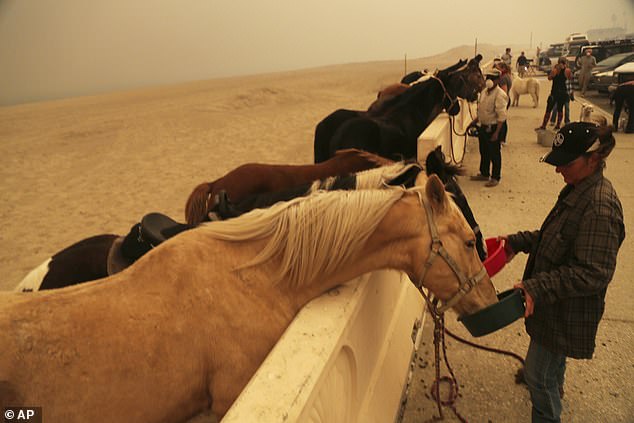 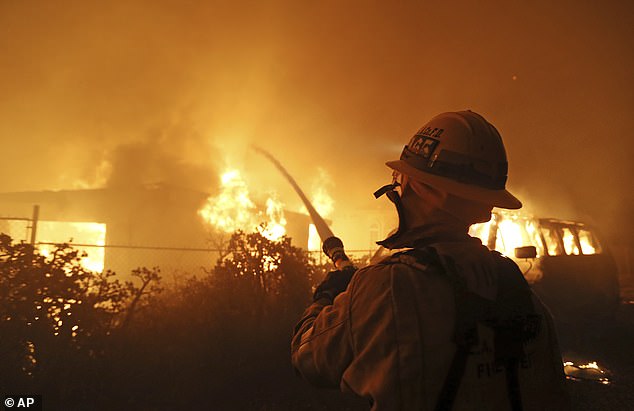 People unable to get into evacuation centers or hotels sought refuge in their cars, cafes and even the beach.

Evacuees Steven and Karen Hansen, of Oak Park, told the VC Star that they left their home on Thursday at 10pm and went to stay at friend’s home in Thousand Oaks, only to be evacuated from there 45 minutes later.

At that point, Steven said, they decided to just to the Thousand Oaks Teen Center rather than to keep trying to hop from home to home.

However, long lines of people waiting to get into the Teen Center left them little choice but to stay in their SUV overnight, take naps and watch security footage of their home on their cell phones, looking for signs of fire.  They were fortunate, as their home was not impacted.

In Woodland Hills, evacuees were spotted cramming into a local Coffee Bean & Tea Leaf location and using it as a temporary shelter, where they could watch security footage of their homes on cell phones and laptops after sleeping in their cars or relative’s homes overnight, according to Los Angeles Daily News.

More than 150 people filled Woodland Hills’ Taft Charter High School shelter, which was set up by the Red Cross, to capacity Thursday night.

Among those at Taft, were residents of senior-care facilities in nearby Westlake Village and Agoura Hills, who had been received evacuation orders from police Thursday midnight.

Malibu’s Zuma Beach, meanwhile, was where many humans fled with their animals in tow, setting up chairs next to their cars and walking their dogs on the sand while fire engine sirens could be heard in the distance, the Los Angeles Times reported.

The Malibu Zoo also managed to evacuate its animals and bring them to the beach.

A spokesperson for the Red Cross said that as of Friday at 10am, 722 people and an unspecified number of large animals were being housed at various shelters across the state.

For more information or to donate money, please visit www.redcross.org or call 1-800-Red-Cross.