A long-lost episode of Sesame Street has resurfaced on social media more than 40 years after it was allegedly pulled from syndication for striking fear in the hearts of children.

The episode, which only aired once on February 10, 1976, starred actress Margaret Hamilton, who reprised her role as the Wicked Witch of the West from the classic 1939 film The Wizard of Oz.

For decades, fans who wanted to watch Hamilton terrorize the residents of Sesame Street were mostly out of luck — until now. The footage has been leaked on Reddit and YouTube, allowing the public to relive the ‘scary’ episode.

A long-lost episode of Sesame Street starring Margaret Hamilton as the Wicked Witch of the West has resurfaced online more than 40 years after it aired on February 10, 1976 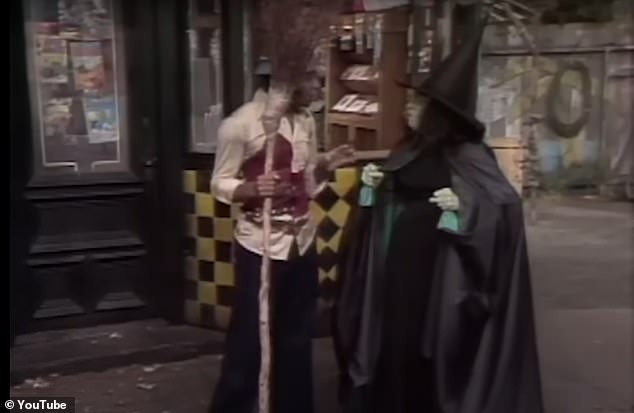 The Wicked Witch was flying over Sesame Street when her broom flew out of her hands. David (Northern Calloway) faced her wrath after catching it and refusing to give it back

The plot was inspired by The Wizard of Oz, but instead of ruby slippers, Hamilton’s character was scheming to get her broomstick back.

The Wicked Witch of the West was flying over Sesame Street when the broom blew out of her hands and nearly landed on David (Northern Calloway) outside of Hooper’s Store.

She was furious when she saw him using to sweep the street and demanded that he give it back to her. She tried grabbing it off him, but she was physically shocked into remembering that she couldn’t touch the broom if someone else was holding it.

The villain vowed to return for her property, but he told viewers he wouldn’t give her the broom until she showed him some respect.

David recounted what happened to Maria (Sonia Manzano), who didn’t believe him until the witch appeared and made it rain inside the store. 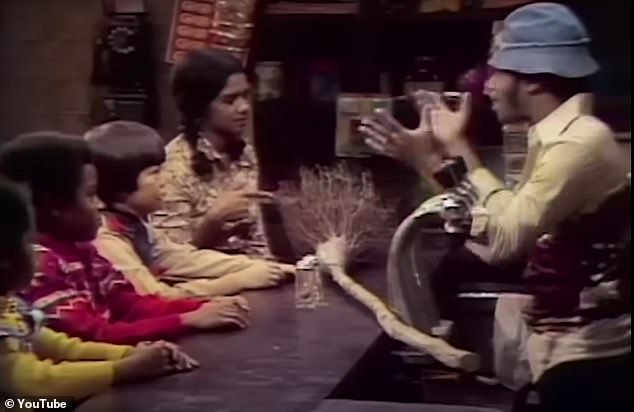 David recounted what happened to Maria (Sonia Manzano), who didn’t believe him until the witch appeared and made it rain inside the store 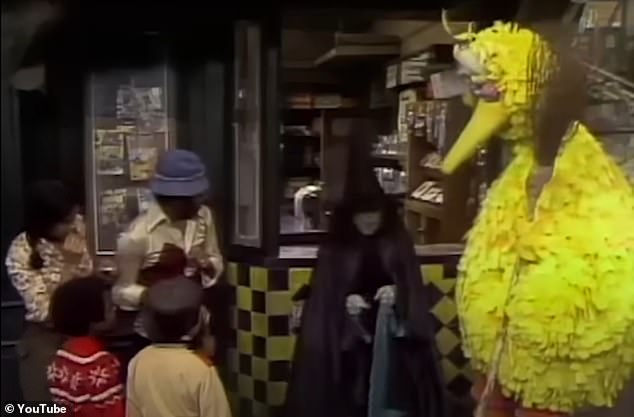 Hamilton’s character also tried snagging the broom of Big Bird, but he stood up to her 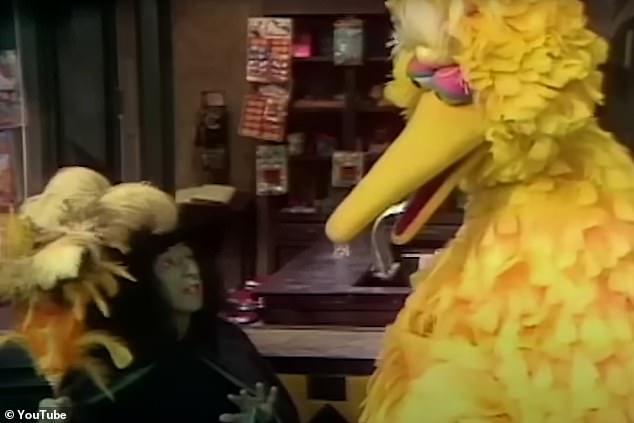 Later, when Big Bird tried to stick up for David, the witch threatened to turn him into a feather duster, but he refused to abandon his friend.

After some scheming, the witch returned to the store posed as an old woman and fooled Big Bird, who was standing guard with a hockey stick and a baseball bat.

David wasn’t as easily convinced, but he figured out a way to get the witch to treat him like a person and get her broom back. All she had to do was stammer ‘please,’ and he handed it over.

The episode ended with the group watching the Wicked Witch fly away, but she dropped the broom again when she tried showing how she can ride with ‘no hands.’

‘I can’t go through this again,’ David cried. 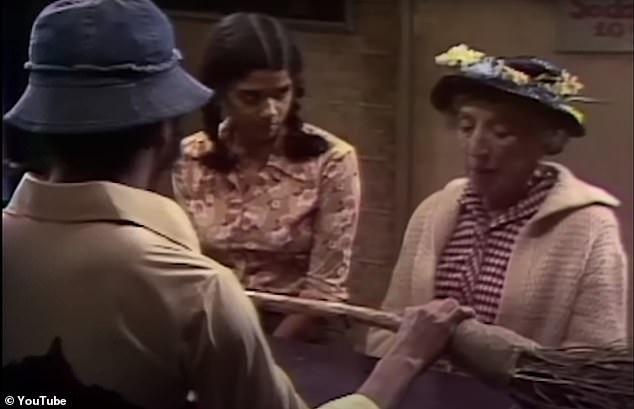 When the witch returned to the store posed as an old woman, David tricked her into politely asking to hold the broom, and he happily gave it to her 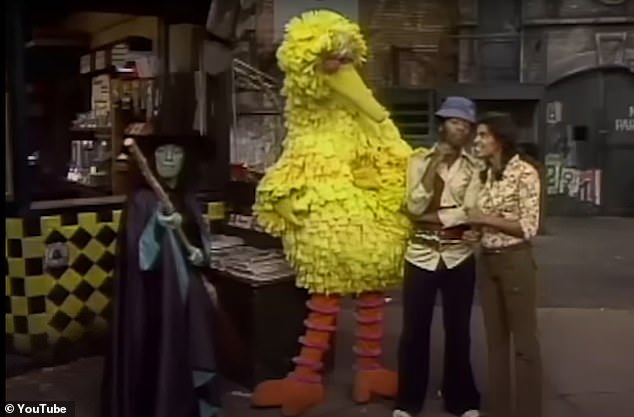 The episode aired only once on February 10, 1976, before it was allegedly pulled from syndication following complaints from parents that it was ‘too scary’ 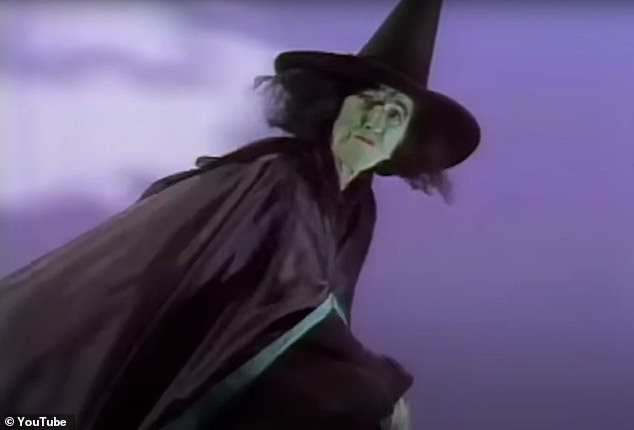 The episode is reportedly archived in the Library of Congress for public viewing, but it’s unclear how it leaked online decades later

The goal of the controversial episode was to ‘demonstrate fear’ and ‘the value of planning by creating and implementing methods of retrieving the broom,’ according to the Muppet fan archive Muppet Wiki.

However, the Wicked Witch of the West may have been too frightening for young kids to handle as Sesame Workshop was allegedly inundated with complaints that led to it being yanked from the air.

The episode is archived in the Library of Congress for public viewing, according to the AV Club, and up until this week, the bootleg versions that were online were mostly low quality.

The lost footage was first shared on Reddit and then on YouTube over the weekend, though it’s unclear how it was found after all these years.

Fans have been taking to Twitter to share their thoughts on the episode, which has since gone viral. 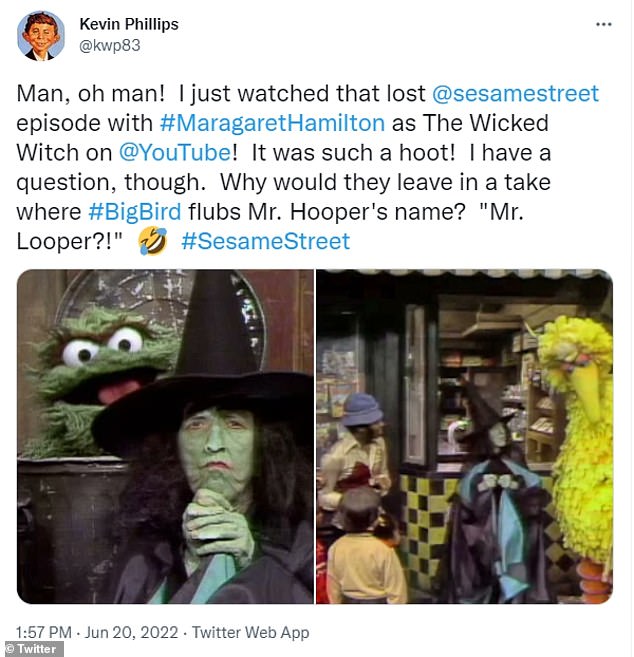 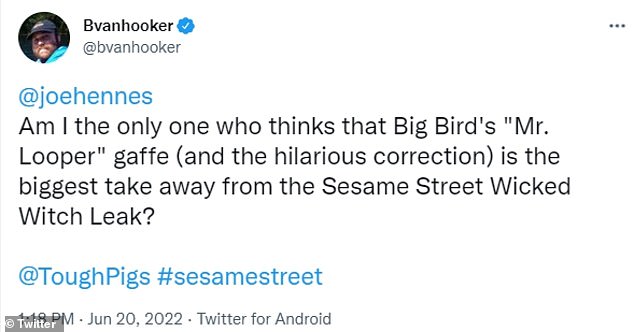 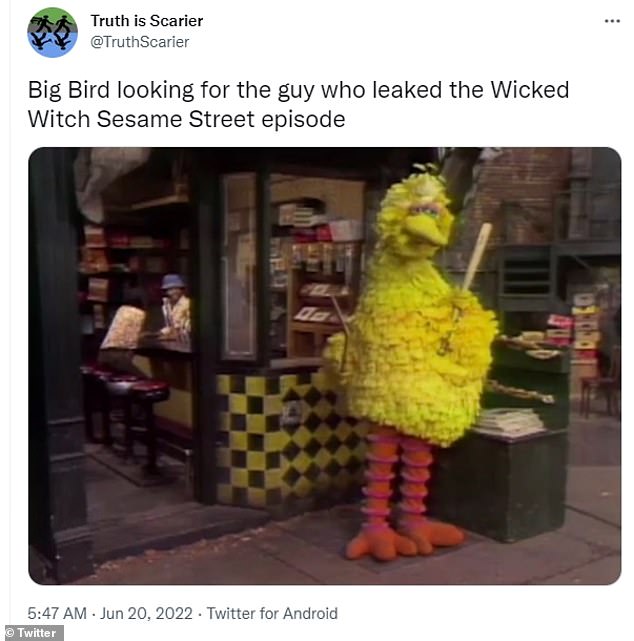 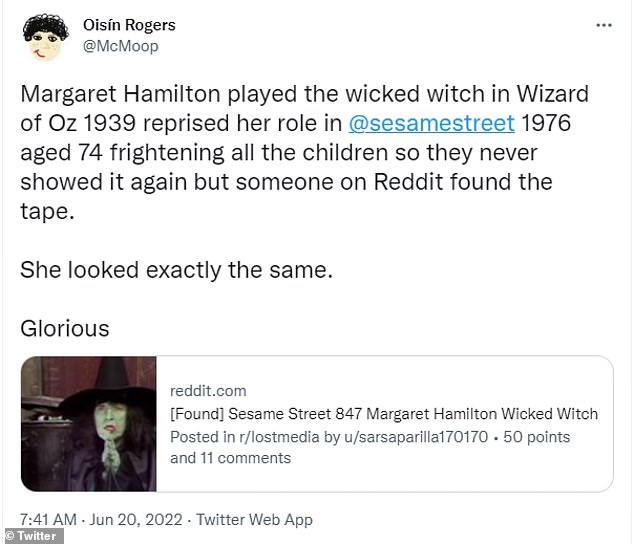 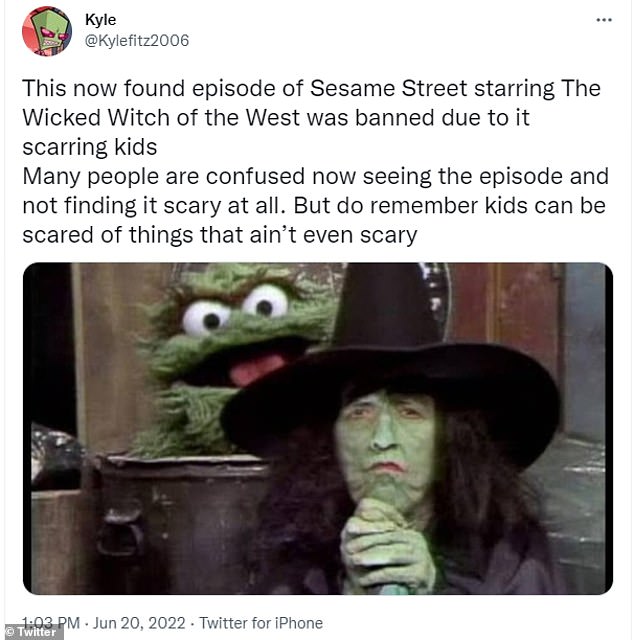 Fans have been taking to Twitter to share their thoughts on the controversial footage, which has since gone viral

‘Man, oh man! I just watched that lost @sesamestreet episode with #MaragaretHamilton as The Wicked Witch on @YouTube! It was such a hoot!’ one person tweeted.

‘Watching this Wicked Witch Sesame Street episode and I think the fact that she can just become a sweet old lady in order to infiltrate society is the most terrifying thing of it all,’ someone else commented.

Another added: ‘I can confirm that if I had seen the Wicked Witch episode of Sesame Street when I was 6 years old, I wouldn’t have slept for weeks.’

Others were admittedly perplexed as to why the episode was banned because they didn’t think it was scary at all.

‘This Wicked Witch Sesame Street episode is pretty neat tbh. Kids got scared easy back then,’ one Twitter user wrote.

‘Many people are confused now seeing the episode and not finding it scary at all. But do remember kids can be scared of things that ain’t even scary,’ somebody else pointed out.

DailyMail.com has reached out to Sesame Workshop for comment.