The growing numbers of Britons out of work due to long-term sickness appears to have been exacerbated by lengthy NHS waiting times and continues to build pressure on the UK jobs market.

Office for National Statistics data published on Tuesday shows that, while unemployment remains historically low at 3.6 per cent, levels of ‘economic inactivity’ have continued to climb to record highs since the onset of the pandemic.

Economic activity – which measures the number of people out of work, not seeking work and who are thereby not claiming unemployment benefits – rose to 21.6 per cent per cent in the three months to the end of September, the ONS data shows. 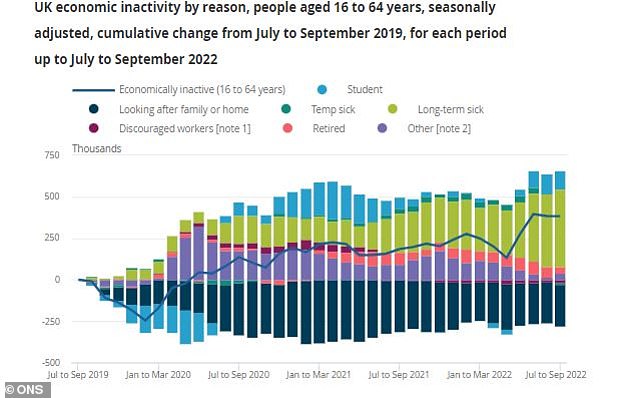 Long-term sickness is the biggest contributor to economic inactivity

The post-Covid growth in economic activity has reversed a trend seen since records began in 1971, whereby it has generally been in decline.

Modupe Adegbembo, G7 economist at AXA Investment Managers, explained that constrained labour supply and rising inactivity ‘has been one of the main uncertainties over the labour market since the pandemic and could see the labour market remain tight despite sharp falls in demand’.

Thomas Pugh, economist at RSM UK, added: ‘It will be extremely difficult for economic growth to rebound strongly without getting more people into work.’

The rise in inactivity has coincided with strong employment figures, which remained largely unchanged in the last quarter while companies are continuing to advertise for vacancies.

Who is leaving the workforce? And why?

The trend of rising inactivity has largely been concentrated within the 50- to 64-years category since the pandemic began, but the latest ONS data demonstrates a growing number of younger Britons leaving the workforce.

Over 55 per cent of the increase in economic inactivity during the pandemic has been driven by 50- to 64-year-olds, according to the ONS, but the rise in the most recent quarter was largely driven by those aged 16- to 24-years and those aged 35- to 49-years.

Among the youngest cohort, the increase in inactivity can partly be explained by those turning to education. 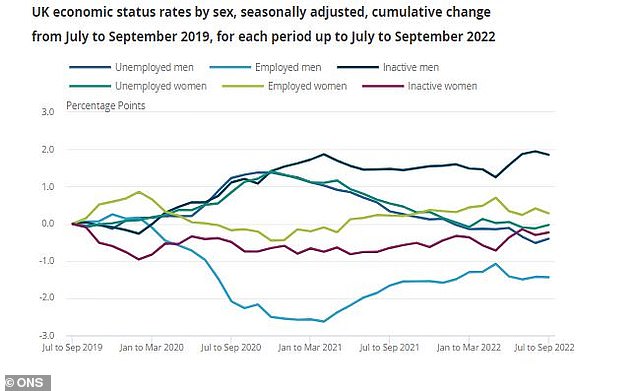 Most economically inactive Britons are men

The ONS said: ‘Although economic inactivity increased across all age groups in the latest three-month period, those aged 16 to 24 years and those aged 35 to 49 years drove the increase in inactivity, while those aged 50 to 64 years saw the smallest increase since July to September 2020.

‘The number of those inactive because they are students also drove the increase in economic inactivity during the latest three-month period.

‘While the number of those inactive because they are students has been decreasing since mid-2021, it has increased in recent periods.’

Similarly, while men have been most likely to become economically inactivity since the pandemic began, women accounted for the largest increase in the last quarter. The number of inactive men fell during the period. 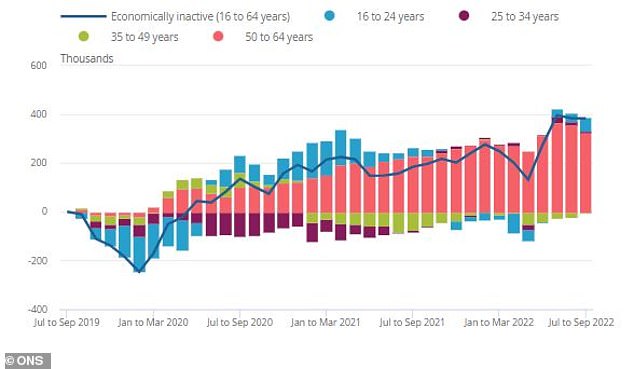 50- to 64-year-olds are the most likely working age people to be economically inactive, while a growing number of students has increased the number of younger Britons out of work

Long-term sickness has been the key reason for the increase in inactivity since the pandemic began, and this trend continued in the most recent quarter.

The ONS said: ‘During the latest three-month period, those who were economically inactive because of long-term sickness increased to a record high and drove the increase in economic inactivity in July to September 2022.’

He added: ‘There’s no single condition that’s causing all this, though it’s hard to escape the conclusion that ballooning NHS waiting lists are a contributing factor.

‘Those workers that have left a job due to illness are predominantly in lower-paid sectors and roles, most noticeably in consumer services.

‘That suggests it may well be a contributing factor to the worker shortages we’re seeing in hospitality.’

However, Phoenix Insights data suggests that ill health may not be in the only driver of inactivity, particularly within older age groups.

The group’s survey findings show just 16 per cent of 50- to 64-year-olds in the UK gave long-term sickness as their reason for having left the labour market, compared to 26 and 37 per cent of the same age group in the US and Germany, respectively.

Conversely, the survey suggests that that financial strength is a key driver of inactivity.

Catherine Foot, director of Phoenix Insights, said: ‘A combination of factors seems to be driving people’s decision to leave work. Among those that have left the labour force since 2019, 57 per cent of people in their late 50s told us they were not looking for work because they wanted to retire or look after family.

‘Relatively high levels of homeownership and the perceived financial security this brings also played a role: 71 per cent of economically inactive 50-64 year olds in our UK sample were homeowners, compared to 55 per cent in the US and 34 per cent in Germany.’ 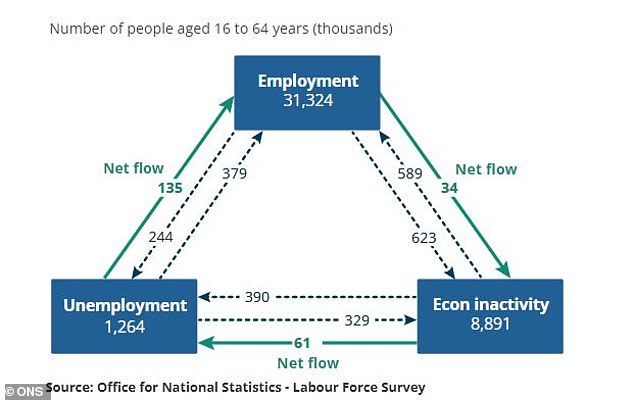 ONS data demonstrates the movement of workers in the last quarter