A peer who claimed £14,000 in expenses without speaking in the Lords for a year today moaned about having to turn up to Parliament ‘hang around’ waiting to vote.

Ex-CBI chief Lord Jones sparked a storm of criticism after he was exposed as one of the peers who rarely bother turning up to the Lords chamber to speak or vote.

And in an astonishing defence of his paltry voting record, he said he has more important things to do than to hang around the Lords all day.

And he said that Lords and MPs often have no idea what they are voting on but just troop through the division lobbies on the order of their party whips.

Challenged about his poor voting and speaking record, Lord Jones told the BBC’s Sunday Politics: ‘Have you ever been and listened to a debate in the Lords?

Lord Jones, pictured on the Sunday Politics today, said he does not often speak or vote in the Cahmber because he does not have to want to hang around Parliament all day waiting

‘You will see how many people are in there…there are usually between eight and 14 out of 800.

‘Our legislature is stuff full of people waiting there.’

He added: ‘I am not somebody who is going to hang around in Parliament’s restaurants and bars waiting to vote.’

He was asked directly by the presenter Sarah Smith why he does not resign if he thinks much of the House of Lords work is a waste of time.

But defending pocketing the £300 daily allowance without speaking or voting very often, he said he has other important duties- like taking people to lunch in Parliament.

He said: ‘There are many may things members of the Lords do that doesn’t relate to parroting and following what somebody else says on the same subject – which I refuse to do, or speaking to an empty chamber or indeed hanging on, sometimes for hours, to vote.

‘There are many many many other things that you do.

‘You quote me as saying I will entertain at lunchtime or show people around the house – everyone from schoolchildren to inward investors, I will meet ministers about big business issues or education issues

‘None of that relates to going in the House and getting on your hind legs.’

Lord Jones said he ‘definitely’ provides vale for money for taxpayers – but called for nearly half the peers to be axed from the House, reducing its size to 400. 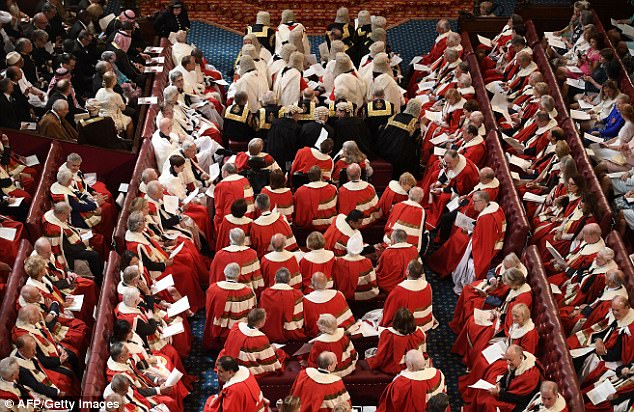 A report on plans to reform the House of Lords is due to report soon. The Chamber is facing renewed calls for reform after it emerged that many some of the 800 peers often pick up their £300 daily allowance despite rarely voting or speaking in debates (file pic)

He said he favours reforms like imposing a an age limit on peers of 75 or 80, or a time limit on how long they should serve for.

Lord Jones also tore into the many Lords and MPs who he said vote purely how their party chiefs tell them to and do not listen to debates.

He said: ‘Do you really think that an MP or a member of the Lords who hasn’t heard a moment of the debate, who then hears the ding ding ding of the bell, they don’t know which lobby – the whips tell them – they haven’t heard the debate they don’t even know what they are voting on, then they go and do it.’

His comments come ahead of the publication of a key report which will outline proposals to slash the number of peers in the Lords.

There have long been calls to reform the Chamber, which now has 800 peers and costs the taxpayer millions.

David Cameron’s decision to make many of his former aides peers when he left No10 is has fuelled demand for reform.

But despite repeatedly calls for reform of the Chamber, politicians have shied away from tackling it and Theresa May is unlikely to be able to push through reforms given her wafer-thin working majority.