But it was the center fielder’s actions during the 6th innings that really won over fans.

Much to admiration of the crowd,  Trout, 27, was seen throwing a baseball to a young boy who had been calling his name from the stands all game long.

The encounter was caught on camera, and shows the boy frantically waving as Trout runs from the dugout and makes his way across the pitch.

The youngster stands at the barricade with a baseball glove on his left hand, ready to catch a ball set to be launched by the MLB star.

Mike Trout won the admiration of the Florida crowds on Sunday, when he was seen throwing baseball to a young fan in the stands

While the boy drops the ball the first time,  Trout proves he’s happy to help make a special memory for the little fan by tossing it again.

The heartwarming moment was captured on camera by a spectator named, Ken Burke, who spoke with Newsflare about the encounter between Trout and the boy.

Burke stated: ‘With a big smile on his face, he [Trout] tossed the ball up to the little boy, he dropped it the first time and it fell back onto the field as seen in the video.

‘The second toss up he bobbled it and made Trout laugh.’

Trout’s generosity won over fans, who are clearly impressed with his performance on and off the pitch.

Burke stated: ‘Trout is one of the best players of all time and the fact that he still has the kindness in his heart to take time away to do these small gestures just increases his likelihood in baseball.’

New Jersey-born trout is considered one of baseball’s hottest stars, joining the MLB back in 2011. 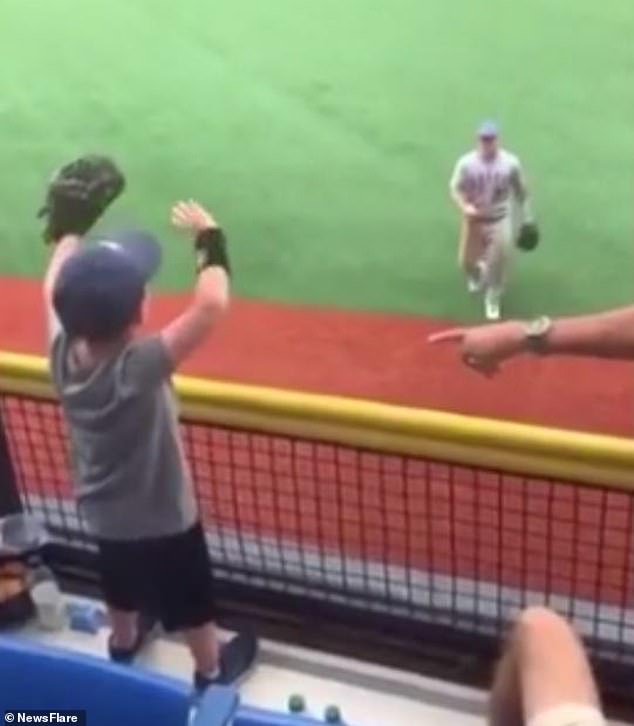 In the clip, which has quickly gone viral, the boy can be seen frantically waving as Trout runs from the dugout and makes his way across the pitch