LA is cracking down on rude subway riders in a new ‘Metro Manners’ scheme.

Inconsiderate passengers could find themselves hit with a $75 fine, or even banned from public transport under the initiative aimed at re-introducing etiquette on the city’s buses and trains.

Los Angeles County Metropolitan Transportation Authority hopes to target three of the biggest complaints by focusing on three main areas: no seat-hogging, no blocking the aisles and no eating or drinking.

Seat-hogging, in the form of manspreading – where men sit back with their legs wide apart often taking up two seats – is the single biggest annoyance of female passengers.

Those found committing the offenses can be fined $75 per offense and be escorted off the vehicle.

Around a quarter a men ‘manspread’, according to a study by Hunter College of New York City subway riders, but many women say they often feel too intimated to ask them to move over. 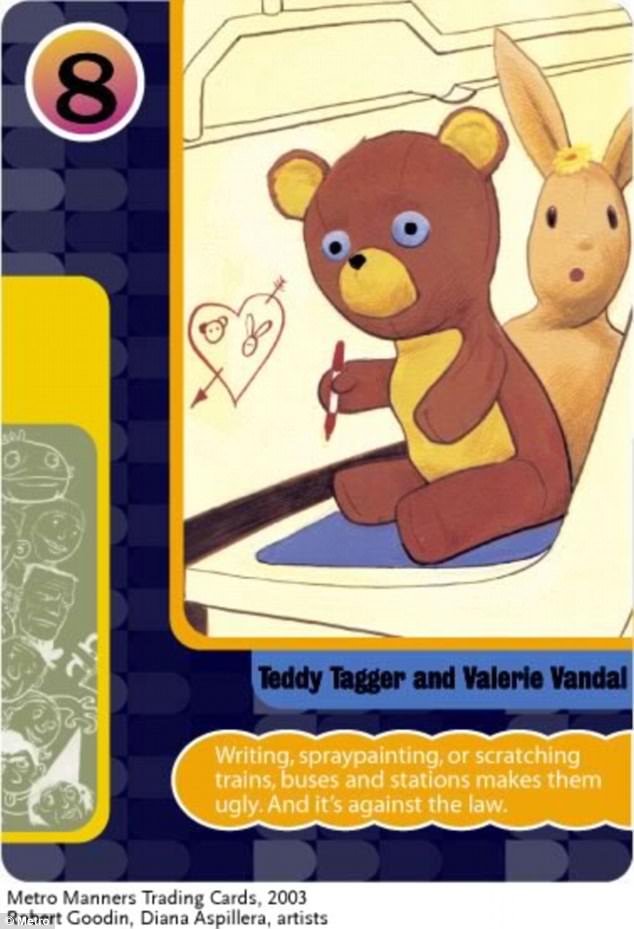 The Metro will use YouTube videos, friendly bus and train placards (pictured) combined with enforcers, to hammer home the message that antisocial behavior is not welcome 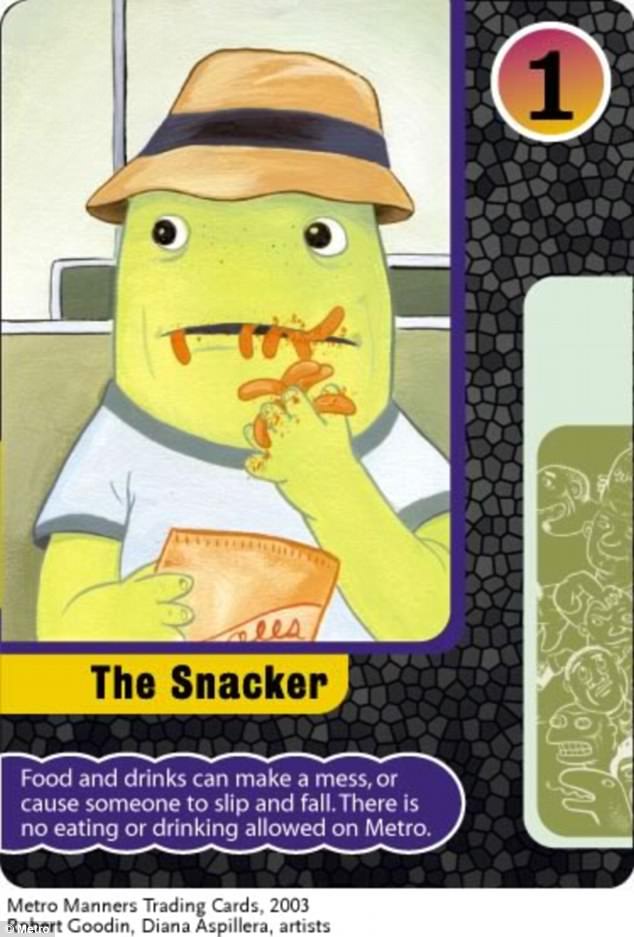 And while some men try and complain it is uncomfortable for them to close their legs, Kelly Williams Brown, author of the book ‘Gracious’ and etiquette expert says: ‘Public transportation is not a place for comfort.’

‘It is not a place to do what comes naturally,’ she said. ‘A big part of etiquette is paying attention to the humanity around you. It comes down to consideration, kindness and respect.’

Other cities have clamped down on the selfish practice and New York launched its own campaign two years ago.

Two men were even arrested for it in 20165, although the charges were dropped. However, the NYPD has announced it will no longer arrest passengers for manspreading.

In LA, eating smelly, greasy food – another common complaint by fellow passengers – will also be a fine-able offense.

The rules aim to improve the public transport experience, as well as improving safety aboard.

‘We are constantly educating customers as to etiquette,’ Metro spokesman Dave Sotero said.

The move comes as more and more residents of Los Angeles, a city not exactly known for its love of public transport, turn to the trains and buses.

The boom in public transportation has seen the opening of two new train lines, the Gold Line from Pasadena to Azusa, and the Expo Line from Los Angeles to Santa Monica during the past year and a half.

And with more lines due to open in Crenshaw and Inglewood, LAX and West Los Angeles, the Metro wants to convince Californians to leave their cars and take the train.

A big part of that means keeping bad behavior out of the trains and buses.

LA-based etiquette expert Elaine Swann believes the ‘shift in culture’ to trains means that Los Angeles residents will have to learn the social norms and etiquette that comes with riding public transport. 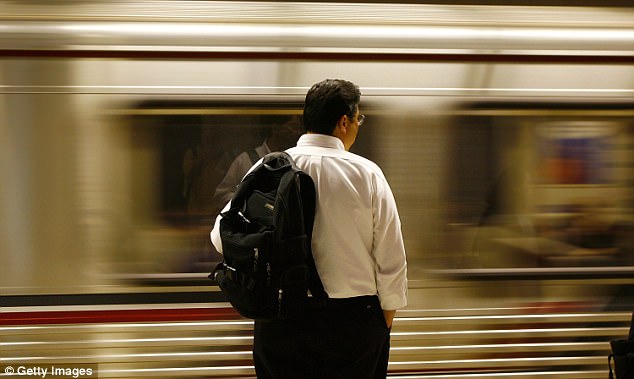 Inconsiderate passengers could find themselves hit with a $75 fine, or even banned from public transport under the initiative aimed at re-introducing etiquette on the city’s buses and trains (stock image)

Between March and April this year, the Metro kicked off its first enforcement on the Blue Line which saw sheriff’s deputies and Metro security issue warnings to 3,280 people, cited 55 and ejected 2,064, CBS reported.

They also recorded 681 incidents of riders taking up excessive space, 745 of people eating and drinking and 554 of people sleeping on a bench.

There were also hundreds of incidents of people playing loud music, swearing and other offensive behavior.

For the latest crackdown, the Metro will use YouTube videos, friendly bus and train placards, combined with enforcers, to hammer home the message that antisocial behavior is not welcome.