‘Louis is MAD about rugby!’ Kate reveals four-year-old is ‘getting to grips’ with the sport

‘Louis is MAD about rugby!’ Kate reveals her bouncy four-year-old is ‘getting to grips with passing’ while ‘competitive’ George and Charlotte also ‘love sport’ during a visit to meet wheelchair athletes

The Princess of Wales has revealed her youngest son Louis is ‘rugby mad’ on a visit to England’s wheelchair rugby league team to celebrate their World Cup title.

Kate, patron of the Rugby Football League, hosted a reception for the team at Hampton Court Palace on Thursday afternoon to mark the victory in November’s tournament, which was England’s first since the inaugural competition in 2008.

Speaking to the team about their 28-24 victory over France, she added: ‘You’ve set the bar high haven’t you? Which is good.’

As she told the team she and the family had watched the final on TV, the mother-of-three said the family loved competing against each other – particularly siblings Prince George, Prince Charlotte and Prince Louis.

The Princess of Wales has revealed her youngest son Louis, five, is ‘mad about rugby’ and added her family are competitive during her visit to Hampton Court Palace this afternoon where she hosted the England wheelchair rugby league team (pictured: Louis cheering at Queen Elizabeth’s Platinum Jubilee in June)

The Princess, 41, said: ‘We’re always slightly competitive with each other. They all love sport and Louis is mad about rugby. They are at an age where they just love running around.’

She also revealed she loves to join in with her children when they play sport. The mother-of-three said: ‘I do it all: whenever I can squeeze in exercise I do, even jumping on the trampoline with the children before school.’ 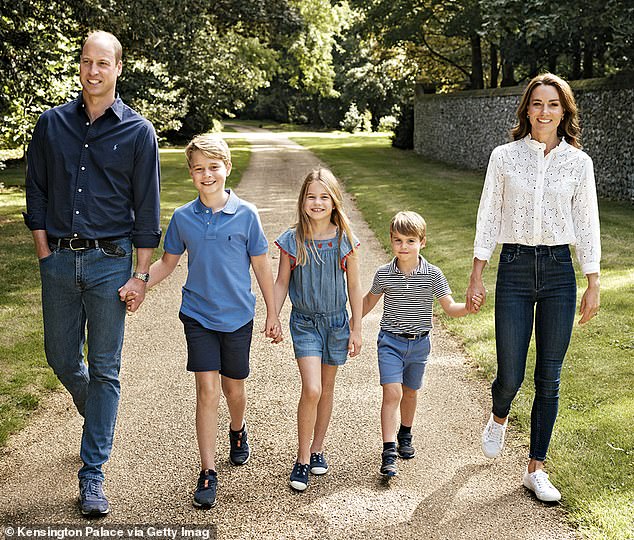 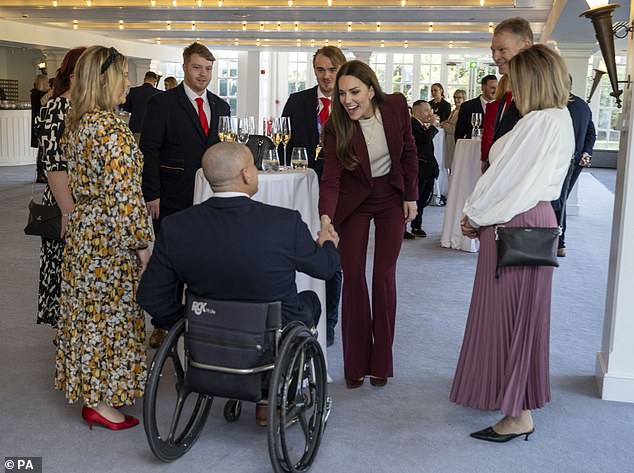 After hearing about Kate’s sporty side, the players invited her in for a training session – an offer she couldn’t turn down.

‘I’d love to come and play,’ she said. ‘There’s no excuse now. We’re going to have to have a family training session.’

Kate, who took over the Duke of Sussex’s former role as England’s rugby league patron in February last year, spoke to players, their partners and the coaching staff in the palace’s garden room before posing with the World Cup trophy.

She then joined the full team for a squad photograph, saying: ‘I’m really proud and really grateful we got this opportunity, and best of luck for the training and the season and I promise I’m going to come and see you for some games.’

Head coach Tom Coyd said Kate told him that Louis in particular was a fan of the sport.

He said: ‘She said Louis is doing tag rugby at school. She was saying that it is quite basic at the minute, that he is just getting to grips with the passing and the running around.

‘But when you are four-and-a-half you just want to get the ball and run in any direction.

‘She actually said that he recognised quite a lot of the crossover with the rugby that he is doing because in tag rugby you have tags on your hips and in our sport we have tags on our shoulders.

‘I just think she and her family connected really well.’

Coyd added: ‘She said it would be great for us to go and do an engagement session at the school where her children attend.’

England player James Simpson, who retired after the World Cup, told PA he was visited by the then-Prince of Wales in hospital in 2009 after losing both his legs above the knee in an IED explosion in Afghanistan, where he was serving as a lance corporal in the Yorkshire Regiment.

Simpson said: ‘That is what started my journey really of getting into wheelchair rugby league three-and-a-half years later and that was a huge turning point for me.

‘It gave me that teamwork, that camaraderie that I lost when I got injured. Going out there in your England shirt and singing the national anthem is absolutely incredible for me as an ex-soldier.’