A 10-year-old boy saved two lives when his mother unexpectedly went into labor on their bathroom floor earlier this month.

Then, when hen he realized Daxx wasn’t breathing, the 10-year-old made the quick decision to grab a nasal aspirator to pump air into the infant’s lungs.

And making the story even more incredible is that the 36-year-old mother was bleeding profusely during the birth, and that the baby was initially in the breech position – meaning he came out feet first.

A breech birth is dangerous because it can cause the infant’s head to get stuck in the birth canal and cause brain injury or even death.

On the morning of August 11 Ashly’s water broke as she was using the bathroom – nearly six weeks ahead of the planned due date September 20, according to KPLC. 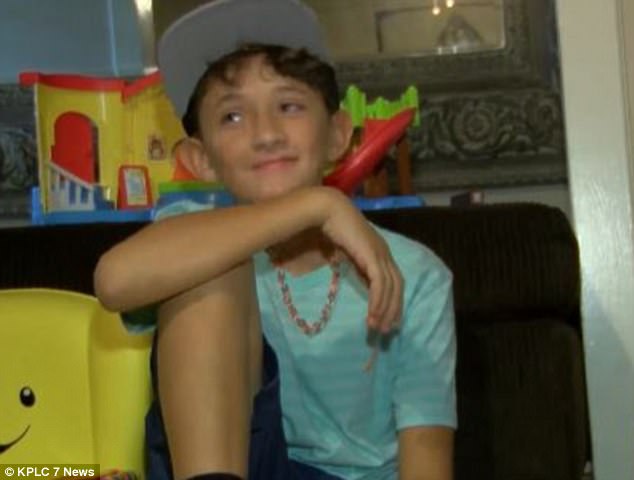 After delivering his baby brother, Jayden, pictured, realized Daxx wasn’t breathing and made the quick decision to go into the kitchen and get a nasal aspirator. He then pumped air into Daxx’s lungs and kept him from suffocating

She looked down and was shocked to see the baby’s feet were sticking out of her – meaning he was in the breech position.

And on top of all of that, after the water broke she immediately started bleeding profusely, causing her to worry about bleeding out before she could even give birth.

Doctors have said the bleeding was most likely caused by her placenta detaching form the uterine wall prematurely.

Because her fiance, Kelsey Richard, had already left for work for the day, Ashly had to call out for her son Jayden and ask him to run next door and get his grandmother.

His grandmother called 9-1-1 for the boy but was unable to help further than that because she’d just undergone back surgery and couldn’t walk.

Jayden sprinted back to his home and said to his mom: ‘Tell me what I need to do and I’ll do it.’ 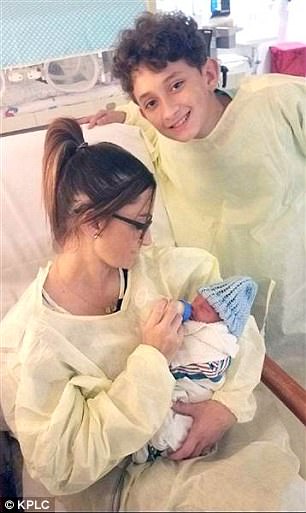 Doctors said that had he not been there and willing to help, the baby would have never started to breathe and Ashly would have bled out during delivery

‘I was crying, but I just tried to stay calm and collected,’ Ashly told Today.

‘Jayden was so calm that it made me more calm. I could see he was scared, but he knew he had to do it.’

The boy got down on his knees next to his mother and grabbed onto his brother’s feet.

Then, as his mother instructed him, he helped to move Daxx out of the breech position by rotating him when his mother told him to.

When Daxx was finally out Jayden noticed he wasn’t breathing and rushed into the kitchen to get a nasal aspirator that his 11-month-old sister uses.

He then ran back into the bathroom and helped his mom start pumping air into the newborn’s nose and mouth.

Daxx began breathing just as the emergency medical technicians arrived with an ambulance to take them all to the hospital.

The baby is now healthy and growing well and will be able to go home before the end of the week.

Doctors  said that had he not been there and willing to help, the baby would have never started to breathe and Ashly would have bled out during delivery.

‘Every time i think about it, I just cry. I don’t think Jayden understands what he’s done and how big it is,’ Ashly said to Today.

‘I said to Jayden, “You’ll always have a special bond with your brother.” I’m just so proud of him. He saved our lives.’